Help Linh Dinh! Postcards from the End of America

In 2021, it came to our attention that the featured writer, Linh Dinh, has expressed anti-Black, anit-Semitic, and overall harmful views since the publication of this post. Linh Dinh’s views do not reflect the values of diaCRITICS. This post will remain available for archival purposes. 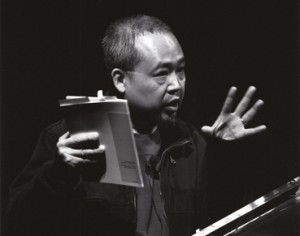 Linh Dinh, diaCRITIC and acclaimed fiction writer and poet, has a project on poverty and photography in the United States. Now he needs your help in funding that project! He has a November 11th deadline to raise his funds! Read on for more information.

I want to visit as much of the United States as possible, to document, in photos and texts, its economic and social unraveling. This is a continuation of a project I started in May of  2009. For this, I’ve been maintaining a frequently updated blog, State of the Union, with, so far, over 3,100 photos and 50 1,000-plus-word essays. Without any institutional support whatsoever, I’ve managed to visit over 20 states. I’d travel by bus or train, and often sleeping on them to save money. At each city, Detroit, Buffalo, Cleveland, New Orleans, Atlanta, etc., I simply walk for miles and miles through unfamiliar neighborhoods. I’ll talk to whomever would talk to me. I’ve photographed the homeless living in tent cities or lying on sidewalks, as well as peddlers, protestors, public preachers and prostitutes.  I’ve photographed casinos and abandoned factories. I see myself as a contemporary Dorothea Lange, except I have no WPA behind me.

Interspersed with my photos are sketches and essays that I’ve also published in many leading political webzines such as CounterPunch, Common Dreams and Dissident Voice, as well as The Guardian newspaper. Though the response from readers has been tremendous, I’ve been paid for none of my pieces. On reader comments, “This guy makes more sense than almost anybody else I read these days.” Another, “Yo, once again, to Linh Dinh! The man is a master political polemicist. He is precious, as we need such writers more than ever. Because our predicament, political, financial, environmental, moral, and societal, needs to be discussed openly and with no censorship.”

My essays and photos will be compiled in a book,  to be published by Kaya Press in the Fall of 2012, but this will not be the end of my project. I intend to track our deteriorating socialscape for years to come. I have so much time to think about the under-employed or the dispossessed because, well, I’m one of them. Before my brief and already defunct career as a pseudo professor of creative writing, I was a house painter and a window washer. My wife makes less than minimum wage, right now.

Whatever support I get will be used to buy as many 15-day rail passes as possible, at $389 each. When a place is not reachable by train, I’ll go Greyhound. Money is also needed for hotel rooms, around $80 a night, when I’m not sleeping on a train or bus, and for meals and other incidentals, around $60 a day, at each city and town visited. Also, I will give money to some of the people I photograph, as I’ve often done. Occasionally, I’ll buy them food or drinks.

I came from a losing society, South Vietnam, and I’m experiencing a collapsing culture right now. We will all lose, but there’s also dignity and strength in losing. Despite all the evidence, mainstream media continue to trumpet daily that the recovery is here, but all I see is an accelerating collapse. I believe that my project is important, and deserving of support, because it is an unflinching diary and analysis of this monumental collapse. It’s a tall order, sure, but at this stage in my evolution as a writer, artist and citizen, I’m more than ready for this paradoxically life-affirming challenge.

Pledge as little as $1, or get exclusive perks for your support…

Please take the time to rate this post (above) and share it (below). Ratings for top posts are listed on the sidebar. Sharing (on email, Facebook, etc.) helps spread the word about diaCRITICS. And join the conversation and leave a comment! What do you think of Linh Dinh’s project? Is the State of our Union one of disunion?