As loyal diaCRITICS readers will remember, last January I interviewed the reigning king of Saigonese rap Nah Nguyen on the eve of his sophomore release, Awakening. Now, just one year later, the evidently hardworking emcee and already prolific lyricist has released his first U.S. album, executively produced by Lac Su, the author of I Love Yous Are For White People. Nah’s new album Vietrap No1tuLoveR  continues to deliver the powerful messages from Nah’s first two albums, while also tightening up the beats for an enjoyable listen. 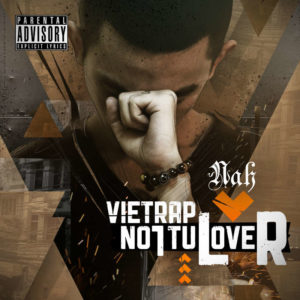 The first track opens with airy yet mournful strings and piano that invoke the traditional Vietnamese ballads that romanticize the past and landscape of Việt Nam. But as soon as the beat drops in, Nah begins to rap about the realities of contemporary Sài Gòn, including homelessness, poverty-induced infanticide, and political corruption. Referring to the Vietnamese government, Nah raps: “They treat us every day the way the humans treat the apes/Everyday my people got robbed, murdered, and raped.” Nah’s voice cuts through the darkness of these realities, as the purpose of his music shines in simple yet powerful statements, such as “I just wanna change Sài Gòn, Việt Nam.” This prefatory track sets the tone for an album that tethers Vietnamese musical traditions and the socially conscious discourse of hip-hop. It is this combination of rhythms and perspectives that enables Nah to offer a unique view of Sài Gòn today.

The city of Sài Gòn is the muse of the album’s second song, “Sài Gòn Ɖẹp Lam.” It is a track worthy of serious booty-shakin’ because of its upbeat rhythms and the record-scratching reminiscent of late ‘80s and early ‘90s hip-hop royalty like Run-DMC. However, as with all of Nah’s work, this song is not merely for head-bobbing. His messages, like those of one of his major influences Tupac Shakur, run much deeper. Featuring Wowy and Thái Việt G  (who recently turned actor in Byron Q’s award-winning feature film Bang Bang), the lyrics of “Sài Gòn Ɖẹp Lam” paint the city with an unflinchingly honest pen:

Everyone lives for money, and each one of us is a soldier

Look careful down the alley when you’re on the streets

The massage parlors full of whores, I see ’em come and go

At the same time that he underscores the corruption, crime, and desperate circumstances of surviving in Sài Gòn, Nah weaves in a love for his city of birth and his home of District 5: “This Sài Gòn’s still quite fine because I’m used to the ugly . . . This Sài Gòn is still quite fine even though this war isn’t over.” With these threads of positivity and hope, Nah calls for change, for people to “live upright,” and for listeners of his album to not forget about the people of Việt Nam.

One of the most unfortunate aspects of mainstream American music today is that socially conscious hip-hop is oftentimes erroneously conflated with, and eclipsed by, auto-tuned hip-pop that glamorizes excess (during a recession, to boot) and objectifies women to obscene degrees. In this climate, I think it is important, especially for the female hip-hop fans out there, to commend Nah for acknowledging the women-specific issues in Sài Gòn. His lyrics in several tracks mourn prostitution: “Cái Chết Sau Cùng” addresses the difficulties of whether to choose abortion, and “Quá Ngấn” cringes at mothers being forced to abandon their children because of poverty. In “Nah Story,” the emcee tells a story about a girl that initially sounds like a traditional tale of unrequited love, but Nah deepens the sense of loss by singing about how the girl eventually died from AIDS. Anyone who has visited Việt Nam must remember what the postcards of the countryside do not show—the road signs that warn, through paintings of skulls and red palms, of the dangers of HIV and AIDS. As though in mourning of this loss, the track fades out.

The latter half of the album features slower jams to match the somberness of his lyrics’ recurring themes of death and loss. These tracks also show how Nah and his producers have created cleaner samples and beats as well as arranged great collaborations. In addition to the guest talents of Wowy and Thái Việt G mentioned above, the closing track features the crush-worthy Mondega, the Montagnard artist who declared himself “The Greatest Asian Rapper Alive” and whose albums are a must-listen. I was also excited to listen to two artists that I hadn’t yet had the pleasure of hearing, Cubb and Cleverstar.

Nah and Mondega collaborate on “Why”

I must note how excited I am that, among these collaborative tracks, Nah has worked in some serious saxophone on “Ngã.” This instrument brings back memories of the good ol’ days when INXS was big. Oh, the ‘80s saxophone solo is a magical beast:

As I replay Nah’s new album and listen to the rich fabric that is his Vietnamese and English lyrics, I am reminded of one of his comments in the interview I conducted with him last year. He said that he was insecure about his accent, and “Nah Story” addresses how his accent affects certain audiences: “some people claim that they don’t understand my words.” Yet, he follows this up with: “My broken English cuts through the barrier/White, black, and yellow, Nah’s in your area.” It seems that this young rapper has grown to appreciate the power of his bilingualism in that it enables him to call for transnational, interracial solidarity in the matters of social justice around which his rhymes revolve. After a year of negotiating what protest should look and sound like in the U.S., Nah revives the tradition of hip-hop as a critical discourse through his own way of continuing Việt Nam’s proud, centuries-long history of resisting oppression.

To Nah, his loyal fans, and to new listeners that this album deserves, I have to echo that Nah’s accent is absolutely not a detriment. In fact, his voice brought me a sense of home, of being in between Việt Nam and the U.S., Vietnamese and English. His is a language of comfort and promise, the music of possibility. As a life-long hip-hop fan, I’m glad that I don’t have to mourn for what the genre used to be, but that I can celebrate what it is continuing to become. To be part of this watershed moment in hip-hop history, what Nah calls “Viet rap’s leaders’ revolutionary move,” visit blacklava.net  to pick up a copy of Vietrap No1tuLover now.

Please take the time to rate this post (above) and share it (below). Ratings for top posts are listed on the sidebar. Sharing (on email, Facebook, etc.) helps spread the word about diaCRITICS. And join the conversation and leave a comment! Excited to hear Vietnamese rap in English? Are you a fan of Vietnamese rap in general? What about Vietnamese American rap?

A Joyous Experience: An Tôn Thất In Conversation with Abbigail N. Rosewood