Review of Year of the Rabbit, Play about Viet Nam and Afghanistan

diaCRITICS editor Viet Nguyen reviews Year of the Rabbit, a play about the haunting effects of war on soldiers and survivors, men and women, American and Vietnamese.

When I was in college twenty years ago, I read a great deal about the Vietnam War and saw most of the American movies about it. From a Vietnamese point of view, one thing was very clear: it was a white man’s war. There were other people involved, of course, and they made their appearances, but the novels, movies, histories, and journalistic accounts by Americans usually centered on the trauma and tragedy of white men, and mostly white male soldiers. This was despite the fact that some of those who created these stories were well aware that they needed to understand Vietnamese perspectives; they just did not do it. Back then I was angered by their lack of will, talent, or empathy; I still am, but I also have some empathy towards them in recognizing how difficult it is to draw together many plots, many characters, and many histories into one coherent story.

Fast forward twenty years and we are now in the age of post-multiculturalism and post-feminism. All the cultural struggles to have women and people of color be present in their own stories have had some effect, even if the battle for representation is far from done. You have to have your head in a very particular place nowadays to discuss the Vietnam War and not foreground the Vietnamese or give them equal time; although this strange and unforgivable accident still does happen nowadays, it does not occur in playwright Keliher Walsh’s Year of the Rabbit. I wish Hollywood would do some of the things that Walsh does in her play, such as imagine a world where Vietnamese, African Americans, and white Americans can occupy the stage at the same time and have their stories given equal weight. The same is true for women and men, and in her play, Walsh weaves a complex story of how war involves all of us, not just someone who looks like Matt Damon in Saving Private Ryan or Charlie Sheen in Platoon.

Walsh’s story begins in Vietnam with the introduction of Lieu, a young Vietnamese woman whose journey takes her from the peaceful countryside through a wartorn hell where her family is slaughtered to the South China Sea as a boat person and finally to the United States. To some, this may sound like an extraordinary story. To many Vietnamese, it is unfortunately all too common. Lieu is played by Elyse Dinh, who pulls off an authentic Vietnamese accent and interjects both tragedy and humor into a difficult role. Her journey involves falling in love with an African American soldier and conceiving a daughter with him whose story evolves in parallel with Lieu’s own.

The daughter, a Navy co-pilot, serves in Afghanistan, where she becomes romantically involved with her pilot, a “white boy.” Their relationship crumbles when they bomb an Afghan wedding and kill civilians, an incident that will haunt both of them and the pilot’s upper-crust parents, played with verve by Peter Mackenzie and Keliher Walsh herself. Ashanti Brown and Will McFadden as the two pilots strike sparks, and through their relationship, Walsh brings together both war and sex (or is it love?). While politicians and generals like to keep war and sex separate, as if war were some type of pure strategic undertaking, soldiers and civilians often experience how war and love (or is it sex?) are inseparable.

Walsh drives that point home in her depiction of the relationship between Lieu and her soldier-lover, JC Bridges (Meschach Taylor). They are literally blown together by an errant U.S. bomb, one of several ways Walsh builds parallels between their Vietnam War story and the later Afghanistan War story of their daughter. Walsh takes on a great deal of history and diversity in telling these stories that cross races, genders, nations, wars, and decades. She does exactly the opposite of what the canonical white male writers of the classic Vietnam War era from the 1960s through the 1980s did not do. In this way, her work is indicative of recent dramatic works in Los Angeles that have sought to deal with the horrific consequences of the American War in Vietnam, ranging from its impact in Cambodia (Extraordinary Chambers at the Geffen, about the ongoing presence of Khmer Rouge atrocities in contemporary Cambodia) to Laos (Refugee Nation by Teada Works, about the effects of the war on Laotians and Laotian Americans). All these works feel the pressure of history in the present, the need to hear many voices, and the recognition that war is not only about whites, or men. The Vietnam War and its “sideshow” in Laos and Cambodia demonstrated this, leaving a little over 58,000 American soldiers dead and somewhere in the range of 5 to 6 million Southeast Asians dead, many–and perhaps most–of them civilians. 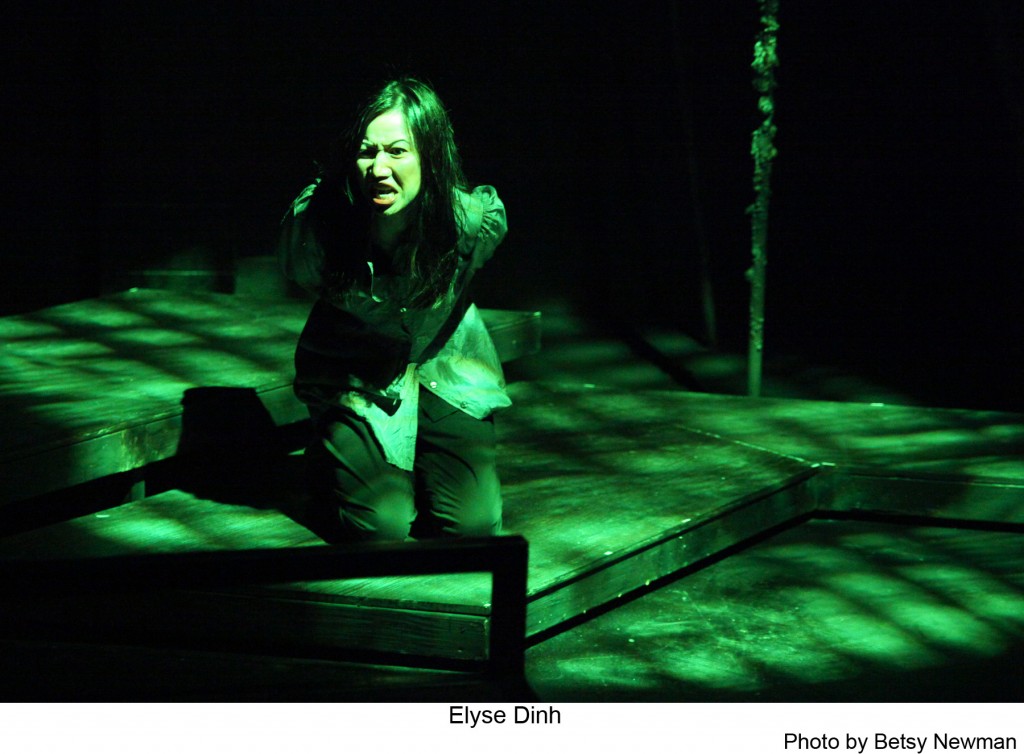 Year of the Rabbit expresses that awful history through the burden it places on Lieu, who is not so much of an individual as the American characters as she is a historical figure: the suffering Vietnamese woman. Walsh can be pardoned for producing an archetype instead of an individual; Vietnamese people have sometimes done the same, most notably, in this case, Le Ly Hayslip, who told a similarly dramatic story about her own experiences in her memoirs, When Heaven and Earth Changed Places and Child of War, Woman of Peace. Lieu collapses under the weight of the suffering, which is understandable if she is seen as a representative for the millions of dead. But in an alternate universe, she might one day be an individual.

I was glad I saw the play, with its stark, bamboo-inflected set by Hana S. Kim, its subdued sound design by Joseph “Sloe” Slawinski, its evocative lighting by Pablo Santiago, its spot-on costumes by Tina Haatainen-Jones, and its economical directing by James Eckhouse, who pulls off a particularly neat trick late in the play when Elyse Dinh takes on two other roles simultaneously. But I was a little sad, too, not because of the story but because the play was staged almost in the shadows of Hollywood. With its Godzilla-sized budgets, Hollywood still has difficulty pulling off, or even attempting, stories as complex as this one, brought in at a tight ninety minutes. The juxtaposition between the Afghanistan War and the Vietnam War that Keliher brings together, not to mention the interweaving of soldiers and civilians and men and women, is seemingly too much for Hollywood to do. Too many uncomfortable questions are raised in Keliher’s play, from the ways that the imagination of war cannot be separated from the erotic to the linkages between Vietnam and Afghanistan that imply the presence of an American imperial mindset.

In the end, what haunts the play is not just the traumas of the Vietnam War and the Afghanistan War for Vietnamese and Americans, but the Afghans themselves.  Never seen, never heard, Afghans nevertheless play a crucial role as the victims, much as the Vietnamese have done in earlier American stories of the Vietnam War. Walsh deserves great credit for bringing together as many stories as she has, but we nevertheless have to wait for the day when Afghan stories will be told and heard. If previous experience with the Vietnamese is any indication, we may have to wait a long time.

Viet Thanh Nguyen is a Los Angeles-based professor, teacher, critic and fiction writer, author of Race and Resistance: Literature and Politics in Asian America and numerous short stories in Best New American Voices, TriQuarterly, Narrative and other magazines. He is the editor of diaCRITICS. More info here.

In Los Angeles, the Ensemble Studio Theater premieres Year of the Rabbit by Keliher Walsh.

The winner of Kentucky Women Writers Conference Prize for Women Playwrights Competition, The Year of the Rabbit by Los Angeles based actress and playwright Keliher Walsh is a complex snapshot of two American families spanning two generations and two wars – the Vietnam War and the Afghan War.

Please take the time to rate this post (above) and share it (below). Ratings for top posts are listed on the sidebar. Sharing (on email, Facebook, etc.) helps spread the word about diaCRITICS. And join the conversation. If you’ve seen the play, tell us what you think of it in the comments. Or do you have other thoughts on how the Vietnamese and Afghans have been depicted in American culture? Or the role of women in war?

In the Diaspora: December 2022

In the Diaspora: November 2022