Born in 1960 in Việt Nam and emigrated to the United States in 1975, An-My Lê is a photographer whose work plucks at the tense/tender ties between reenactment and memory. She’s now got huge accolades plus $500,000 (over the next five years) to take her large format camera even farther. Here diaCRITIC Nora Taylor, Alsdorf Professor of South and Southeast Asian Art at the School of the Art Institute of Chicago, congratulates An-My Lê on her recent receipt of a MacArthur “Genius” Award, the common nickname for the MacArthur Fellowship, one of the most prestigious arts awards in the United States.


[before we begin: like diaCRITICS? why not subscribe? see the options to the right, via feedburner, email, and networked blogs] 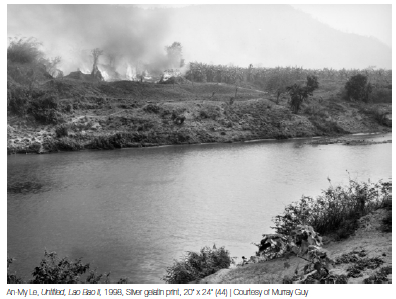 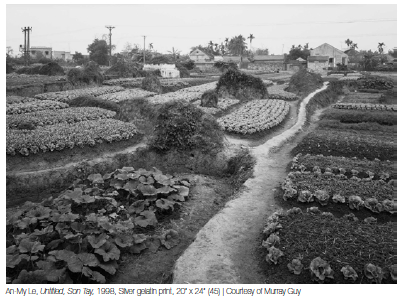 Born in Saigon in 1960, her family came to the US in 1975. Always interested in how photography captures “reality,” after her MFA from Yale, she made several return trips to Vietnam in the 1990s to see if she could take pictures that would match her memory of the place she left as a teenager. She once explained that memory is often made up of sensations, smells, and tastes rather than clear pictures. Not content to just capture Vietnam, she went on to use photography as a tool to question the machinery of war. She started by photographing Vietnam war reenactments in West Virginia. And was told that she had to participate in order to be allowed to photographs the players. She was given the part of a Viet Cong girl. That she agreed, rather uncomfortably, shows how far she is willing to go to challenge the perceptions of war in photography. The results were astounding. They captured soldiers in army fatigues “looking” as if they were in the Mekong Delta when, upon closer look, it becomes clear they are sitting in the pine forests of the Appalachians.

In 2003 when the United States went to war with Iraq, An-My decided it was an opportunity to shoot war in action but she wasn’t given permission to follow the army, and instead was allowed to photograph the location where the army was training at 29 Palms in California. The results are eerie desert landscapes that, like the reenactment series, look like war but are facsimiles of war. Since then, she has traveled to Australia and Antarctica, spending long stretches of time on US Navy ships, still using her large format camera, documenting the life of marines on endless seascapes and ashore, reuniting with their loved ones. She was also witness to the US Navy’s first stop over in Vietnam since the end of the war.

I’m very fortunate in Chicago that the Museum of Contemporary Photography regularly pulls out the photographs they have of hers in their collection for my students to study. The MacArthur award has not only given An-My the recognition she deserves but also will give her the means to continue making these photographs that speak so well about both the human dimension of war and the surreal world that it occupies.

Among the best essays on An-My’s work, consult these two sites, Museum of Contemporary Photography and PBS’s art21.

Born in Việt Nam in 1960, An-My Lê left as a political refugee in 1975 and resettled in the United States. Her ongoing photographic series concerns the military and war in reenactment, practice, and memory. Yet her instrument has been a large format 19th century style camera, resulting in captivating and compelling images of scenes such as Việt Nam war reenactors in the United States, U.S. military war gaming in the California desert in preparation for Iraq and Afghanistan, and landscapes of Việt Nam. Her exhibit Small Warsgathered some of the best of this work. Lê received BAS and MS degrees in biology from Stanford University (1981, 1985) and an MFA from Yale University (1993)

Nora Taylor is a Chicago-based art historian of modern and contemporary Vietnamese art and professor of Southeast Asian Art History at the School of the Art Institute of Chicago. She is author of Painters in Hanoi: An Ethnography of Vietnamese Art (Hawaii 2004 and NUS 2009) as well as numerous articles on Vietnamese art. In 2007, she curated “Changing Identity: Recent Work by Women Artists from Vietnam” that toured 10 venues in the United States. The exhibit included four photographs by An-My Lê, including the first two images featured with this article.

Please take the time to rate this post (above) and share it (below). Ratings for top posts are listed on the sidebar. Sharing (on email, Facebook, etc.) helps spread the word about diaCRITICS. And join the conversation and leave a comment! Have you seen Lê’s work in person at an exhibit, or in the book Small Wars? What impression did she make?