diaCRITIC Jade Hidle reviews Shattered:  The Asian American Comics Anthology, compiled by the same team of Jeff Yang, Parry Shen, Keith Chow, and Jerry Ma that brought you Secret Identities:  The Asian American Superhero Anthology in 2009. Comics have always been fun, but now they are “literature” and “art” too, and Asian American writers and artists are exploiting the form.

The other day I met a new co-worker and spoke to her for quite awhile about a variety of topics. I was wearing my glasses during this conversation. The following day, it was raining, high winds blowing sheets of cold water into my face. Without the miniature windshield wipers that come in so handy for glasses-wearers in cartoons, I popped in my contact lenses. Sans glasses, I walked into the same co-worker’s office and greeted her, to which she responded, “Who are you?”

Nerd that I am, my first thought was, “Maybe it is plausible that Superman could pass as Clark Kent. Those damn tricky glasses!”

In these moments (there have been others, my sister-in-law included, who don’t recognize me, or in a funny sort of way become almost suspicious of me, when I am without my glasses) of putting myself in Superman’s shoes, I experienced a twinge of curious desire to see myself as a comic book hero. Vietnamese, freckles, glasses and all.

Shattered:  The Asian American Comics Anthology allows for Asian Americans to do just that. Released in November 2012, Shattered was compiled by the same team—Jeff Yang, Parry Shen, Keith Chow, and Jerry Ma—who brought you Secret Identities:  The Asian American Superhero Anthology in 2009. The new anthology collects a broad spectrum of genres and styles that exceeds the bounds of the superhero focus of the last collection. 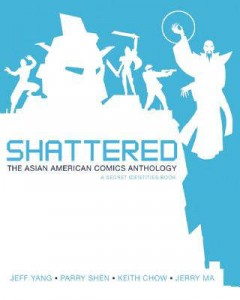 What unites these diverse works of art and literature is the anthology’s prefatory mission statement to “reimagine one of five archetypes frequently associated with Asians in media and popular culture:  The Brute, the Brain, the Temptress, the Alien, and the Manipulator.” The works are divided into five chapters that correspond with these identified stereotypes, and the editors’ preface instructs the audience to read the anthology from beginning to end. I’m not sure how necessary it is to do so or how effective the categorization is, given that many of the better works address more than just one of the aforementioned stereotypes. Perhaps the intentions of organizing the book in that fashion would be more compelling if the editors–all accomplished artists and/or writers in their own right–would have elaborated on how and why they chose to focus on those five archetypes. Nevertheless, the more important point is that the express purpose of the collection is to address, and hopefully combat, the media’s perpetuation of centuries-old racist stereotypes of Asians and Asian Americans.

Thankfully the anthology represents some of the ethnic diversity within the umbrella term of “Asian American” by including authors, artists, and characters of East Asian, Southeast Asian, and South Asian heritage. This is a positive direction that future works and collections can follow in terms of representing diverse classes, gender identities, and sexualities within Asian America as well.

The book includes work from relatively well-known names such as Gene Yang of American Born Chinese fame and author of Level Up, previously reviewed on diacritics, as well as Phil Yu, a.k.a. Angry Asian Man. Yet it was interesting for me to gain exposure to works by artists and writers with whom I am not as familiar.

As with any anthology, some works are more satisfying than others. Many of the comics address marginalization, loneliness, and shifts in identity that are both voluntary (disguises, undercover ops, etc.) and involuntary (the radioactive mutations without which a comics anthology would be incomplete).  The works also meet a range of different reading and teaching purposes. For instance, Kripa Joshi’s one-page “Miss Moti, Shattered” is rather explicit or introductory in its address of the effects of immigration and identity crises.

Others address similar topics and themes, but articulate them within more complex narratives that span from superheroic or science fictional epics to exercises in realism. A few representing the former, Shattered includes comics such as Parry Shen and Jeremy Arambulo’s “Hide and Sikh” about Asian American scientists working for the U.S. government and, with the exposure to radioactive agents in Area 52, transforming into powerful, yet marginalized mutants who struggle to find cool comic book-y catch phrases; Jamie Ford and A.L. Baroza’s “A Cut Above” in which a rogue, saw-wielding student goes on a mission for an ‘A’; Tanuj Chopra and Alice Meichi Li’s tale of seduction at a casino on the moon; and Roger Ma, Dheeraj Verma and Tak Toyoshima’s “Qi Lai!” in which Shaolin monks are entrenched in an epic battle against zombies.

In the latter camp of realistic stories, Shattered serves up Michael Kang and Edmund Lee’s tale of a young Korean American man’s struggles with gang violence and imprisonment; Keith Chow and Jef Castro’s “Peril” addresses disputes over Arizona’s immigration policies; Fred Chao’s strip about an almost rooftop kiss that sends him thinking about the deeper should’ve, would’ve, could’ve moments in his life; Joy Osmanski and Yasmin Lang’s narrative about a young girl dealing with the family-cleaving loss of a sibling.

Some of my other favorites blended the epic and mundane, reality and fantasy. In Daniel Jai Lee and Dafu Yu’s “Heroes Without a Country:  Tokyo Rose,” a shapeshifting Asian woman has a showdown with Hitler. A story equally, if not more so, entertaining albeit in an entirely different context is Tak Toyoshima’s “Occupy Ethnic Foods,” which portrays Asian, Jewish, and Mexican food products coming to life on the shelves to fight against their segregation to the “Ethnic Foods” aisle in the supermarket. The packages of ramen and various cans of sauces even have little arms, with fists raised in protest.

The aforementioned short strips and excerpts from longer works are presented in black and white, but there is a full-color gallery of character sketch collaborations. One noteworthy for the diacritics audience is titled “Revolution Shuffle,” illustrated by GB Tran, author and artist of Vietnamerica, and written by Bao Phi, the prolific and powerful spoken word poet whose most recent publication is Sông I Sing.  In their collaboration, Tran and Phi contribute to the current zombie apocalypse narrative craze.

(I am pausing here to resist an intense urge to ramble about how much I love the AMC television adaptation of The Walking Dead and—spoiler alert, if you’re behind on Season Three episodes—how glad I am that Lori was killed off, though not by zombified fetus as I’d hoped. Sigh.)

Tran and Phi envision an American zombie apocalypse as an epidemic for which Asia is blamed, calling attention to the Yellow Peril ideology prevalent during the 19th century and still at work in contemporary media—I mean did anyone see Contagion? Sheesh!  As a result, the Asian Americans in Tran and Phi’s post-apocalyptic U.S. are corralled into “containment camps, where they serve as human bait to lure the undead away.” As a warrior against such historically rooted forces of discrimination, internment, and violence, the protagonist, Lydia Tran and her right-hand man, California Nguyen (badass name, right?) instigate a revolution to overthrow the walking dead. And the living. Da da dum!!!! Check out Tran’s illustration below of the heroine Lydia seen through the gaping hole of a zombie’s brain. And Lydia wears glasses too! (I wonder if people have trouble recognizing her when she takes her glasses off…) What’s not to like?

Though the comics can be hit and miss, Shattered is a welcomed, valuable foundation for Asian American comics, both in terms of reading and studying. The volume is conducive for students and educators alike, as the editors offer discussion guides and opportunities to bring the Secret Identities Universe (that’s right, watch out, Marvel!) into schools. Check out the Shattered editors’ website at www.secretidentities.org.  Beyond that website, there exists an increasing number of print and digital resources on how to utilize comics to teach both linguistic and cultural literacy, as well as higher order critical thinking skills. And in my experience as an educator, assigning comics has been remarkably useful in taking the first, most important step of getting students interested in reading.  If you pick up a copy of Shattered, the editors also offer contact info and websites for all of the contributors, allowing us–as readers, educators, and students–to become part of the growing movement of Asian American comics and literature.