Artfully crafted in both the illustrations and trilingual narration (French, Vietnamese, and English), Truong’s text recounts an uncommon tale of the Việt Nam War—that of a multiracial family living in the seemingly Norman Rockwell-esque U.S. and travelling back to Việt Nam as the American war there escalates. Truong’s father, a Vietnamese diplomat and cultural counselor, and his French mother, took him and his siblings to Việt Nam. It is through this journey that Truong elegantly weaves complex histories with his own childhood memories. 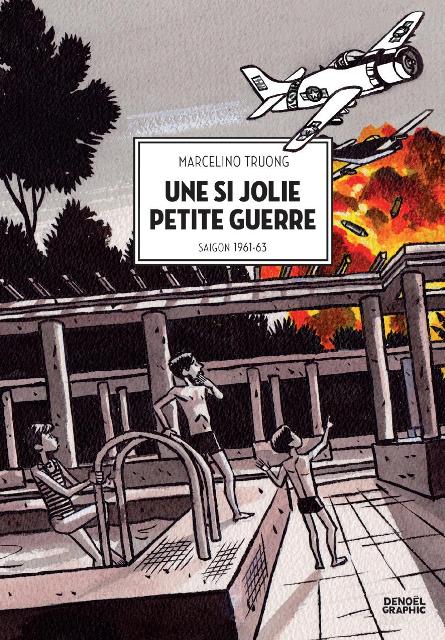 Truong does well to show the ambivalent relations between the U.S. and Việt Nam in these pivotal years in the countries’ interconnected histories. While the two nations both bear spirits of decolonial revolution, the election of John F. Kennedy further polarized the two countries as Cold War adversaries—the U.S. cast as a self-proclaimed paragon of democratic liberty and Việt Nam as a Communist threat to that freedom. Truong situates his family as one of innumerable who were caught in this contracting relationship.

The Truong family in particular occupies a tenuous position in this shifting space of the U.S. in 1961. They are, to put it simply, too American to be French, and too French to be Vietnamese. Truong illustrates how his family’s occupation of this liminal position is charged with racial and political danger. What is compelling is how Truong focalizes these large-scale conflicts through the lens of his childhood self. For instance, within the span of just the first few panels of the book, the idyllic American setting—represented by the White House, “Cherry pie, corner-shop et Coca-cola” (9)—is always already punctuated by conflict. 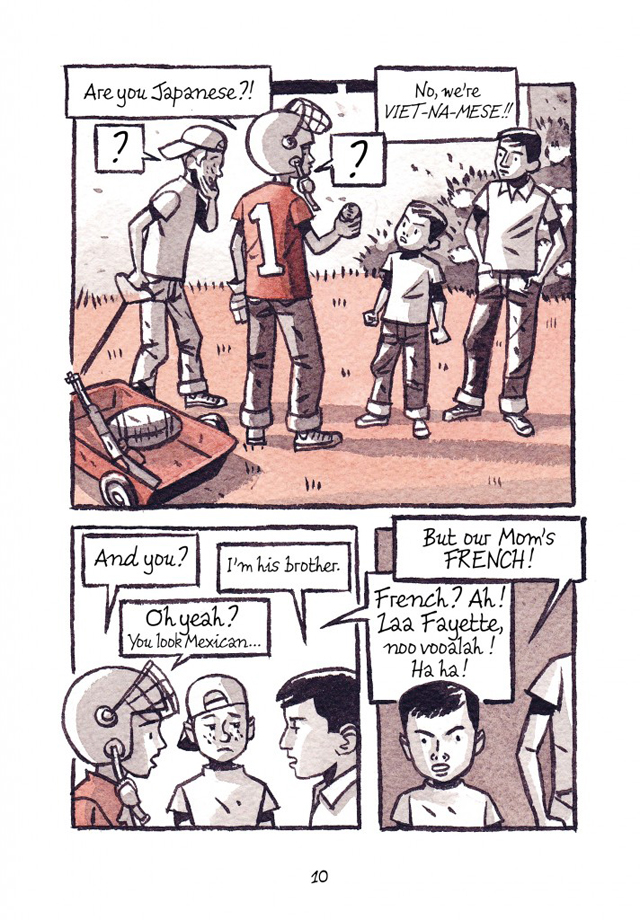 Truong shows how while engaging in grade school play in the U.S. he and his mixed-race siblings are racialized as Mexican and Native American, as well as the pan-Asian Communist targeted with the refrain of “Gook!” (16, 20-1). Regardless of the imposed racial identity, Truong and his family are cast into the role of enemy and thus subjected to violence, even if in backyard games of “playing war” with white neighbor boys, pantomiming national conflicts within seemingly safe domestic space. (The high school boy whose arm I drove a pen into for calling my mother a “gook” can certainly testify to the real violence underlying mere “play.” That’s right, when you, as the awesome Bao Phi would say, “bring out the Vietnamese in me,” I am a bonafide, pen-wielding badass.)

Truong’s blurring of public and private spheres becomes more pronounced in his narration of his family’s time in Việt Nam. The day-to-day struggles of adjusting to life in Sài Gòn is articulated through the domestic, intimate realities of cooking, of attempting to communicate and connect, only to be misunderstood:  “À la récréation, nous ne comprenions rien, la plupart des enfants parlant en vietnamien. À la maison, nous parlions français” (60). (My amateur translation:  At recess, we didn’t understand anything, as the majority of the children spoke Vietnamese. At home, we spoke French.) While from under the luxury of my reading blanket, I found it fun to read in my three languages (French, Vietnamese, and English), the encounter of these tongues in the book often articulates the confrontation of histories of colonialism. The multilingual narration and dialogue underscores the fact that the war was not simply a matter between the U.S. and Việt Nam, but a global (hi)story. This is important because it is through language that we know what we know and how we know, so reading histories in multiple languages can open up possibilities of understanding. In my hopes that Une Si Jolie Petite Guerre will soon be translated into English to make Truong’s story available to a wider audience, I am curious to see how the translation shifts certain meanings and understandings of this history. 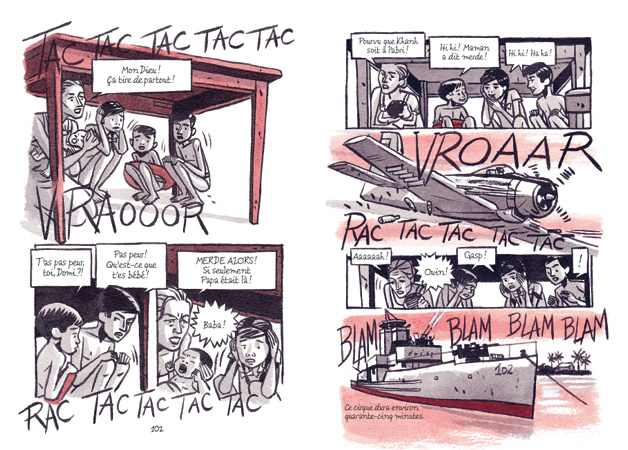 Truong’s oscillations between the public and private manifestations of violence make the sliver of gutter space between the panels brim with the understanding of how the socio-political impacts the individual, how a world at war shapes the imagination of children who experience it. Most evident of this are his deft turns from depictions of seemingly ordinary child’s play to representations of the larger scale violence, sometimes right outside their windows.

Further fostering his childhood point of view as one of the voices in the narration, Truong generously includes his actual childhood drawings in a few panels, which testify to the experience of war from a child’s eyes, as well as the author’s nascent artistic inclinations. It is these moments of a child’s optics, so full of fascination and awe, that I find most precious, in that it is a matter of taking the time to look and think and wonder about things. As we get older, we are trained, and train ourselves, not to look because it is not acceptable or we just don’t have time to open ourselves up and let it all in.

Though all of you readers out there may not have experienced loss on an epic scale of war, we can all no doubt relate to the shedding of our childhood skins, so often toughened by the unavoidable call of adulthood—heartbreak, work, money, disappointment. But, despite all of the growth that we experience, I believe under all those layers of adultness we are all essentially still our childhood selves in the way that we hurt, get excited, fall in love, see the world. What remains of our younger selves will occasionally bubble up through the protective shell we build. This is why, after a day of conducting grown-up matters of attending meetings and paying bills, I still laugh at Pee Wee Herman, cry at E. T., blush when my lover simply smiles at me, and take the time to carefully run a fingertip across the curved ridges of roly poly backs to roll them off the dangerous sidewalks.

My point is that Truong keeps his childhood self alive in Une Si Jolie Petite Guerre. Ironically, or appropriately, this loss, in a book full of loss, is not irreparable. Little Marcelino—or Marco, as he is most often called—is there in the composition of the panels, the phrasing in the dialogue bubbles, the attention to a cricket while bombs burst in the background. Even when the worst things in life transpire, if you can hold on to a core of beauty, however thin it may seem to be whittled, then you can save yourself. For me as a reader, the love implicit in remembering who we once were and, in trusting that person to tell a story, saves us from the harsh realities of a world replete with division and violence. Comfort, tenderness, is there. 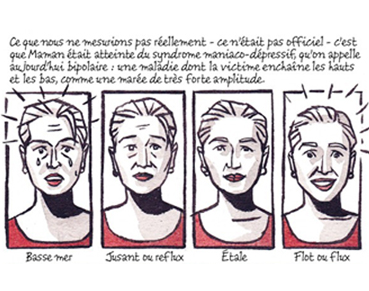 Something else that we learn to do as children is to figure out how to love our parents. In the narrative, Marcelino repeatedly consoles his mother as she struggles to cope with her mercurial moods. His mother’s bipolar condition is a central tension in the narrative about Truong’s family, yet the author also situates his mother’s mental health in the context of the war. Her moods swing with the tides of physical violence and political tensions:  “Chez Maman, le dépaysement et la guerre étaient des déclencheurs de ce trouble mental terrible”  (133). (Excuse my translation:  the displacement and the war were the triggers of this terrible mental trouble.)

Indeed, Truong includes innumerable concrete realities of war that would shake anyone’s mental state. The Skyraiders and Việt Cong tunnels attest to the aerial and subterranean nature of the warfare in Việt Nam; when planes crash, torture ensues. In some of Truong’s most heartrending drawings, sprays of black ink and the onomatopoeic “Zaap” and “Tchaak” illustrate the “cassant des os…perforant les muscles et découpant des membres” (187)—the obliteration of soldiers’ bodies. And, in open rice paddies, a “Rac Tac Tac Tac” from above signals the ripping apart of civilians’ and children’s bodies, leaving no other words but the desperate “Troi đat oi! Troi oi!” (87). Given that the illustrations are hued in warm corals and cool blues, the stark black outlines are all the more arresting when broken and severed when limbs are torn off by explosives, the livelihood of rice fields razed by tanks, blood spewing from bullet-ridden child and civilian bodies. 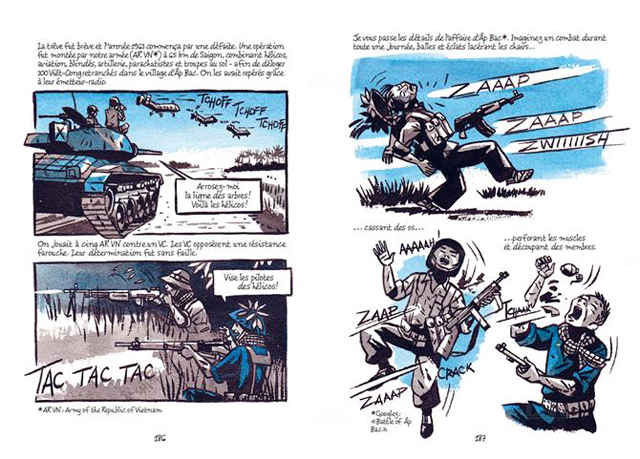 Of course, many of these glimpses of war are not what Truong himself experienced firsthand. The narration very much elucidates a process of remembering, of going back to fill in the gaps and flesh out the larger context for individual recollections. In addition to researched facts about political initiatives and historical events, Truong incorporates documents such as nationalist propaganda as well as personal letters exchanged by family members. This methodology of (re)navigating history in conversation with personal memory also allows Truong to attend to who often gets left out of historical narratives, showing the diversity of those involved in the war:  his mixed family, divisions within the Communist party, women’s roles ranging from traditional to revolutionary, and “la crise Bouddhiste” (227). Valuing Truong’s work as an artistic, literary process spotlights the importance of how we construct and narrate history. The anastomotic relationship between research and the self in Une Si Jolie Petite Guerre is useful not only for readers who may not have, and may be looking for, a historical breadth in their understanding of the war in Việt Nam, but also for those seeking an example of productive methodology to draw history and memory, the world and the self, into meaningful conversation. 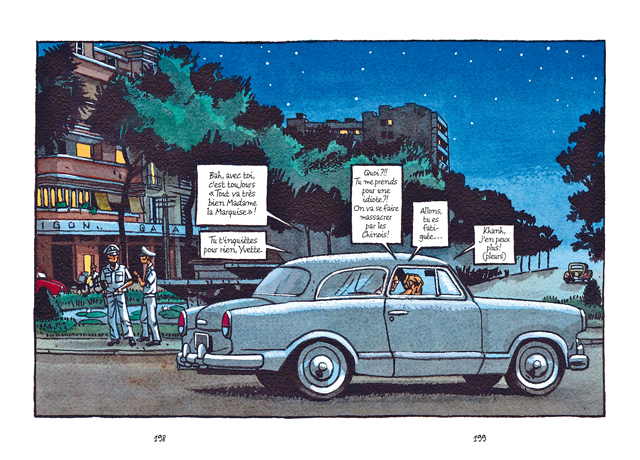 The only discontent I experienced with this book is that the last few pages of the text seem to rush through the war. Although Truong outlines the outcomes and impacts (hippies, protests, the iconic Kim Phuc, and a sweetly heartfelt return to the heart of the story—his parents), I felt it all ended abruptly. But this discontent, I know, is purposeful because the war is not supposed to be the focal point, as it so often gets reduced to in Việt Nam war narratives, but it is also simply because I did not want the book to end. I want to read more of Truong’s stories. Une Si Jolie Petite Guerre is gracefully crafted and, as such, a pleasure to read, and I look forward to what Truong produces next.

Marcelino Truong was born in 1957 in the Philippines to a Vietnamese father and French mother. He grew up in Washington, D.C., Saigon, and London, where Marcelino attended the French Lycée. Marcelino moved to Paris for his studies and earned degrees in law at Sciences Po and English literature at the Sorbonne, before deciding to become an artist at the late age of 25. He has published in various print media, authored books for all ages, and exhibited his paintings in galleries throughout Europe. The majority of Marcelino’s work deals with Asia, especially Viet Nam.

Please take the time to rate this post (above) and share it (below). Ratings for top posts are listed on the sidebar. Sharing (on email, Facebook, etc.) helps spread the word about diaCRITICS. Join the conversation and leave a comment! What is your take on the way Truong depicts war violence? How do you keep your childhood self alive in your adulthood? Also, do you have somewhat similar experiences living in a multiracial family?