To be released by Oregon University Press in October, Mark Pomeroy’s The Brightwood Stillness follows two Portland high school teachers, Nate Davis and Hieu Nguyen, as the latter is accused of sexually abusing his students. As the point of view oscillates between the two characters, Pomeroy draws parallels between the men, both of whom feel isolated in exploring their respective relationships to Viet Nam. Hieu struggles with memories of his homeland, as well as mediating Vietnamese and American cultures as he raises his U.S.-born children. Nate, reckoning with his own traumas after being assaulted by a student, goes in search of his uncle, a veteran of the U.S.-Viet Nam War, who mysteriously disappeared. 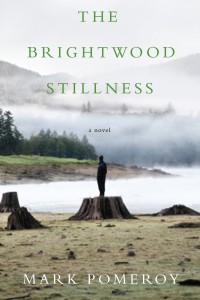 The novel is structured to trace the fluctuations of connect and disconnect between these two seemingly unlikely friends, and in doing so highlights issues of perception. That is to say, the characters and readers alike must confront their preconceived notions about others within matrices of power, including race and gender. For instance, the novel opens with the staccato detachment of a police report that foregrounds how “official” discourses tend to dictate perception of individuals—in this case, Hieu is portrayed as an object, a suspect in sexual misconduct and abuse of his power as a teacher. In addition to the police reports interspersed throughout the novel, Pomeroy shows Hieu battling the everyday articulations of the American public’s collective memory and (mis)perception of the Vietnamese, from people speaking to him in condescending tones to his struggles to impart Vietnamese traditions of food and language to his resistant Americanized children.

Indeed, the most compelling aspects of the novel are the glimpses into the internal realities that complicate the external perceptions. Hieu and his family continually negotiate being Vietnamese American through these layers of generation, gender, and culture. In a dispute with his son Vo, Hieu laments the difficulty of parenting through the “greyness of being both Vietnamese and American” (260).

Due to the nature of the allegations against Hieu, the novel also raises issues of Vietnamese American male sexuality. The book becomes interesting when we get to see Hieu’s side of the sexual accusations. This is not to say I’m a Fifty Shades of Gray type of reader, but I found it very provocative how Pomeroy navigates the risks and recoil of Hieu’s relationships with a female student named Sasha. In this important part of the plot, Pomeroy also attends to important issues of how Vietnamese American men can at once be hypersexually exoticized and emasculated. In a media-saturated society in which it is a victory when John Cho gets a kiss in a movie, I appreciated how Pomeroy delved into the sexuality of a Vietnamese American man to question the bounds of intimacy, desire, “deviance,” and masculinity.

Because Pomeroy foregrounds wavering perceptions about Hieu, in part by frontloading the chapters told through Nate’s point of view, the narrative emerges as an exploration of doubt. Like Nate, the reader is uncertain about whether or not Hieu molested his students. Nate’s ensuing uncertainty begins to parallel a deeper-seated uncertainty about the “foreignness” of Vietnamese Americans. By placing us in this position, Pomeroy implicitly asks us to question our own presumptions in regard to the confusion and conflict of immigration, the perpetual negotiation of racial and cultural identity, messy terrains of sexuality and intimacy, as well as the contracting bonds of friendship.

It was within this suspension in doubt where I was stirred to reassess my own perceptions. I found myself disappointed by Nate’s p.o.v. initially dominating the narrative while Hieu’s perspective is primarily relegated to flashbacks set in Viet Nam. I felt this risked reinforcing the racialized idea of Vietnamese as perpetual foreigners of a different time and space, while white male Americans are the default subject position of the here and now, as they usually are in canonical Western literature. And, like Lang, Hieu’s sister and Nate’s romantic interest, I often became annoyed by Nate’s white privilege, especially when he travels to Indonesia in search of his heavy-handedly named Uncle Sam and over “intellectualizes” everything, including his feelings for Lang. It was often very difficult for me to sympathize with his self-indulgent character.

However, given that Pomeroy’s novel is about the connections, unrecognized as they may be, that undergird layers of doubt and misperception, I tried to harness my irritation with Nate’s character in an effort to appreciate how Pomeroy complicates the typical U.S.-centric purview by drawing parallels between Hieu and Nate. The two men are connected through psychological currents of what many today might call “post traumatic stress disorder.” But their struggles exceed what any clinical term can name. They both push people away while also seeking connection with each other, an internal struggle for the “power [of] convincing yourself that you don’t need anyone” (91). In their self-enforced isolation, they continually reckon with their traumatic experiences. As in many other narratives about Vietnamese Americans, Hieu’s traumas are rooted in vivid, visceral sensory recollections. His cycling traumas of Viet Nam include his father’s “spinal cord protruding like a tail” (34) during the war and nausea of excitement and fear during their flight before the Fall of Saigon when “the smells of fuel blend[ed] with smoke from nearby dung and garbage fires” (111). Likewise, Nate relives the moment at which a student violently attacked him in the parking lot of the high school. Taking a sabbatical to cope with the lingering anxiety from that incident, Nate tracks down his near-mythical Uncle Sam who cinches together Hieu and Nate through the war. When the three men convene toward the end of the book, Hieu and Uncle Sam elliptically discuss their respective experiences of the U.S. war in Viet Nam and forge connection through their shared silences—the impossibility of articulating the ever-raw traumas.

In addition to attempting to flesh out Vietnamese Americans, Pomeroy tries to humanize teachers. On the surface, the student’s violent attack on Nate and Hieu’s alleged sexual indiscretions with students are not unlike what we have seen in headlines, and those resonances call for continuing discussions of student-teacher psychologies and dynamics. Yet, on a deeper level, Pomeroy shows how teachers are impacted by and reflect upon their students’ responses, however trivial or subconscious, and their doubts about everything from their lesson plans to larger questions of why teachers do what they do, as in the emotional and intellectual investment in teaching other people but ultimately feeling empty and alone in a room full of people (89, 109). This professional level of isolation underscores how students often see teachers as “right” (78), or maybe not as people at all, hence the Charlie Brown teacher’s “wha wha wha” drone and all the science fictional portrayals of teachers as aliens or robots. These reductive dismissals of teachers inform current politicized debates about education too. Recently, Stephen Colbert interviewed Education Reform Movement representative Campbell Brown, and their ensuing debate reveals many of these presuppositions about teachers, all with Colbert’s incisive humor and genius. 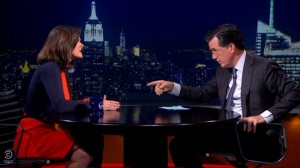 This aspect of the novel resonated because, as a teacher myself, I find it unacknowledged how difficult a position it is to not only educate a room of diverse minds, but also to account for their lives’ struggles and attend to their emotions—to be the most human you can be all while upholding an increasingly bureaucratically and litigiously defined professionalism. I’m sure not all teachers are like this, but I and many of my colleagues are: we witness pain and struggle and joy on our students’ faces, and we carry that home with us and ponder ways to help these young people navigate those emotional conduits of life through intellectual, generative, empowering ways. Our words and actions can leave indelible marks, just as my teachers’ did on me—from the demoralizing elementary school teacher who unforgettably called me “weak” in front of all of my classmates to the motivating teachers in high school and college who told me I could write like nobody’s business and to stick with it. With its ability to last, teaching is an endlessly challenging, difficult, and rewarding responsibility.

After Nate eventually returns to teach at Wilson Green at the end of the novel, he reflects upon the cyclical anxiety of being a teacher dealing with difficult situations: “he could taste the old dread. Teacher caught out in the open. Sitting duck. Referrals, parent phone calls, suspensions, revenge. It was moments like these, ambushed, that he’d felt like running, always” (270). Yelled at with comments like “ ‘Go back to China!’” (141), Hieu feels that his marginalization as an immigrant is exacerbated by his position of teaching at a high school, the locus of mockery that is the site of sore memories in the minds of some of the most successful, happy adults I know. Even though Pomeroy’s novel directly grapples with the U.S.-Vietnam War, his novel does important work in drawing attention to the underrepresented battleground of education.

In sum, I commend Pomeroy’s novel for its efforts to explore the uncertainties and struggles of Vietnamese American identity, as well as its contribution to the discussion about student and teacher well-being that should be at the center of ongoing debates about education. That said, the novel replicates some frustrating racialized and gendered dynamics, particularly in the ending that is rather disappointing in its conventionality. With distance wedged between the characters after a variety of events transpire, the novel laments a man alone complex. Though it fits Nate’s over-intellectualizing, often self-pitying disposition, the isolated man dilemma (as well as the romanticized resolution to it in the final paragraphs) comes off as contrived and did not evoke for me the feelings that I think the author may have intended. I closed the book dissatisfied.

Please take the time to share this post. Sharing (on email, Facebook, etc.) helps spread the word about diaCRITICS. Join the conversation and leave a comment! Like the author of this review, did you also feel disappointed at the ending of this novel? Or does the exploration of Vietnamese American identity and the humanization of teachers outweigh the novel’s flaws?