Eric Nguyen gives a review of David Joiner’s Lotusland, which tells the story of Nathan Monroe, a young American writer living in Vietnam. Though this setting contains the potential for a more in-depth discussion of the privilege that comes with being an expat in a developing country, Joiner’s work focuses instead on Nathan’s mid-life crisis.

From Graham Greene to Francis Ford Coppola, Vietnam has long been a part of Western narratives. Indeed, to this day, Vietnam and the War hold a unique place in Western history and Western writers (that is, non-Vietnamese writers) are still writing about Vietnam. The Lotus Eaters by Tatjana Soli, The Beauty of Humanity Movement by Camilla Gibb, The Brightwood Stillness by Mark Pomeroy, Her Own Vietnam by Lynn Kanter, and The Given World by Marian Palaia are just some novels written in the past five years by non-Vietnamese writers about Vietnam.

We can add David Joiner’s Lotusland to this growing genre, though his book differs greatly in that it is not about the Vietnam War. The War is there of course; it’s just not the focus in this debut. Instead, Joiner aims to tell a story of a contemporary Vietnam, its burgeoning economy and its people through Nathan Monroe, a 28-year-old American expat.

A writer with many debts, Nathan sees himself at a mid-life crisis when he meets Le on a train. In his seven years in Vietnam, he has never met anyone like her. An energetic painter with pink hair, Le is mysterious and fun, a change from the routine struggles Nathan has. Yet try as he might to learn more about her, she never gives him a glimpse into her past. She does, however, make him an unusual offer. “I have to go through the U.S. embassy to get my visa. There’s a lot to prepare,” she says. She wants Nathan to teach her English and help her get her visa to the US, where, she hopes, she can kick-start a career as an artist. She doesn’t have money, she tells Nathan, but is willing to pay with what she can: sex. Nathan hesitates at first but agrees to help her anyway, hoping that their new friendship will become something more.

Meanwhile, there’s Nathan’s friend Anthony, an American expat who owns a real estate firm. Though they both started out as English teachers, Nathan and Anthony took dramatically different paths. Nathan pursued his passion for writing while Anthony took a leap of faith and started working in real estate, quickly bringing in money. While Nathan lived as a poor freelancer in Saigon, Anthony built a life in Hanoi with a wife, two children, and a four-story house. After Nathan begs him, Anthony offers him a job at his company. Though it is soul-draining corporate work, Nathan sees the job as an opportunity to repay some of his debt.

As Nathan gets more involved with Le and Anthony, he learns they’re both hiding secrets. Le has a boyfriend in California and hopes to reunite with him, if not for love, then at least for her career. Anthony, on the other hand, is slowly but surely breaking down and planning to leave the country. When Anthony has a stroke and Le runs away after her visa application is rejected, Nathan is forced to re-examine his life and his path to happiness. It is a classic, albeit predictable, story of what it means to be an artist in a world that seemingly does not reward one’s work.

Doubtlessly, Joiner knows a lot about Vietnam. He has spent more than ten of the last twenty years in Vietnam, and his knowledge of the country shows in his writing. At times, he inhabits the cultural and historical landscape. Joiner’s description of regional differences, for example, is quite spot-on: “The northern accent was easier for [Nathan] because it distinguished more between sounds. Yet there was something cold and hard about the northern way of speaking, a wintry almost material quality.” In another scene, Nathan visits orphans affected by Agent Orange. He observes: “[o]ne infant’s head was the size of a watermelon—bigger than the rest of his body—and covered with scabs; the skin had stretched until it split and bled. The other infant, wriggling in the nurse’s arms, had skin plastering the sockets of her eyes.” Later, with heartbreaking clarity, Nathan realizes the legacy and toll of the War as he holds a dying baby: “The idea that she wouldn’t live—that this infant who’d just touched his cheek and struggled in his arm might soon die—seemed impossible.”

Despite this effort, Joiner doesn’t write about Vietnam. Rather, Lotusland is a story that happens to be set in Vietnam, which quickly becomes an afterthought to a story about one man’s mid-life crisis. One is left to wonder how Vietnam plays into this.

Indeed, Joiner gives himself many opportunities to explore themes such as citizenship and privilege as it relates to life in the globalized twenty-first century. He writes: “[Nathan and Le] both knew that foreign men were afforded any number of chances with women. He was expected to roam, and his passport meant he could always start over elsewhere.” But such avenues of thought are often left unfinished or underdeveloped. Joiner asks, what does it mean to be a white man in a developing country especially one with a history of American involvement such as Vietnam? But any possible answer gets hidden in the mid-life crisis plot line. Whenever it is addressed, it is superficial and quickly brushed aside. When Nathan meets local Vietnamese, for instance, they are continually surprised at his Vietnamese proficiency. “It was true they seemed mesmerized by Nathan’s ability to speak Vietnamese” Joiner writes of Anthony’s children. Later, when Nathan speaks to a gallery salesgirl, she says with glee and surprise, “You speak Vietnamese like a Vietnamese.” When he meets Le’s roommates, they respond, “I’ve never heard a foreigner speak Vietnamese so well!” It becomes redundant without much purpose. Joiner writes of conspicuousness, but he does not dig much further into its meaning. It’s a missed opportunity in a book that plods along between two storylines that never comfortably meet.

One might be tempted to categorize Joiner’s debut not as a book about Vietnam, but a book that is quintessentially American in the most limiting ways: introspective, individualistic and because of this, unremarkable. Lotusland has the potential to speak to a global audience about this moment in time, but it falls short. Without a doubt, it has an interesting cast of characters. The mysterious Le is a rare pragmatic artist, though Joiner barely skirts the Asian sex worker trope. Anthony, though unlikable, eventually becomes a sympathetic and layered father figure. Yet one can’t read this novel without disappointment at what it could have been. 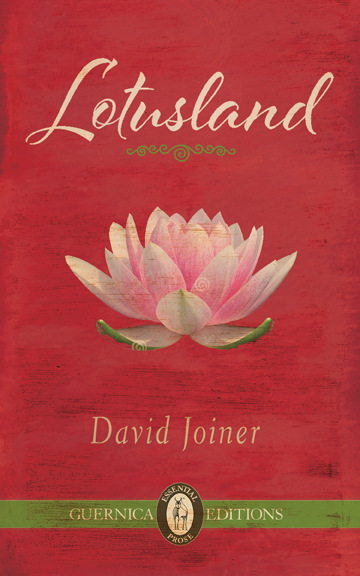 Please take the time to rate this post (above) and share it (below). Ratings for top posts are listed on the sidebar. Sharing (on email, Facebook, etc.) helps spread the word about diaCRITICS. And join the conversation and leave a comment! Have you read Lotusland? What do you think of Joiner’s debut work?