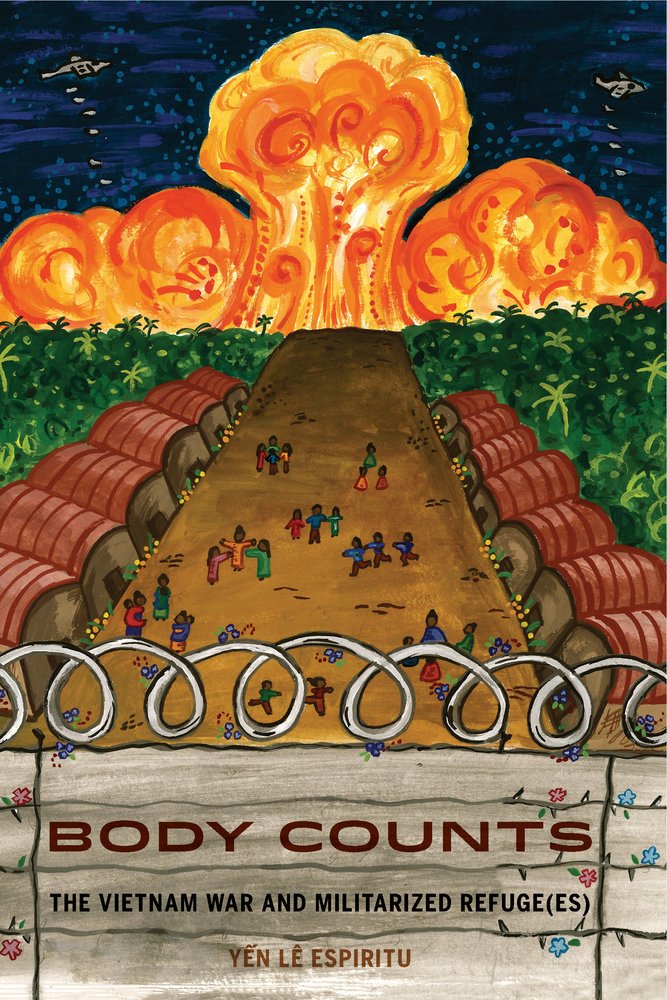 In Body Counts, Professor Yen Le Espiritu accomplishes the task of a lifetime: to put her own life into sociological and historical context without making herself the center of the story. Using the intellectual frame of “critical refugee studies” – a frame that has gained recognition and legitimacy among scholars largely because of her previous work – this book examines the Vietnam War from a Vietnamese refugee perspective. Her view is tremendously valuable and unique because it has been shaped by a combination of self-reflection, investigation of family relationships, and scholarly research.

Most Vietnamese refugees think of the United States as the benevolent provider of their freedom. Instead, this book charts the path to refuge as an established circuit of U.S. imperial and military domination linking Viet Nam to the Philippines to Guam and finally to California. Espiritu makes a gory loop of violence plain as day with the example of General Paul Graham. In 1967, Graham was a commanding officer of the 5th Marine Regiment in South Vietnam; in 1975, as the West Coast Marine Corps coordinator at Camp Pendleton, he processed over 50,000 refugees from Southeast Asia. Killing Vietnamese people—and then rescuing their surviving relatives—helped to drive Graham’s “illustrious career” (p. 35). In Chapter 2, Espiritu exposes the role of U.S. foreign policy and war in creating the refugee crisis, thus making it very difficult to argue that the United States arrived in Viet Nam out of nowhere and with benign motives to “rescue” Vietnamese refugees.

Having crushed the idea of a peaceable refuge, Espiritu then takes apart the idea of the “good refugee.” A popular morality tale in U.S. culture and political discourse, the “good refugee” converts the Vietnam War from a tragic, devastating conflict that most people want to forget into a virtuous and honorable encounter with ethnic diversity. The United States gets to play the savior nation, and refugees play the endlessly grateful beneficiaries of their kindness. Although Espiritu refuses this familiar script, she takes great care not to dishonor her ancestors or the Vietnamese refugees who willingly took the role of U.S. allies during the War. As she puts it: Their lives, accomplishments, and losses deserve our attention—simply because “they once walked the earth” (p. 107).

The book starts with a compelling argument about military imperialism and refugee migration in Chapters 1, 2, 3, and 4 and switches to a much more volatile set of connections about memories, commemorations of war, and ghosts in Chapters 5 and 6. I am not certain about the desires or commitments behind this shift. I also worry that instead of making her arguments sharper and more convincing, references to theorists such as Roland Barthes, Hannah Arendt, Giorgio Agamben, Judith Butler, and that fantastically kooky pop culture guy Slavoj Zizek might come off as trendy or posturing. I am fine that Espiritu is not concerned with appeasing a mainstream social science audience, but is she suggesting that Vietnamese American scholarship ground itself in the work of these particular thinkers? I wish I understood more about how Espiritu explored and navigated particular bodies of thought to make this interdisciplinary, methodologically complex book.

In Chapter 5, Espiritu reveals a serendipitous discovery about her oldest maternal uncle, Colonel Ho Ngoc Can. Surfing the web for anecdotes of Vietnamese soldiers, she stumbled upon an image of him she had seen before—but only on a private family altar in Saigon. Shown from the waist up, the young uncle/colonel sits casually, tilting slightly to one side, head uncovered. Dozens of medals hang from his uniform. When she looks at the photo, Espiritu sees her uncle’s “brooding eyes,” the same shape, color, and intensity of her son’s (p. 116). On the web this portrait circulates with other pictures of decorated ARVN heroes. Later, she found a second photograph that adds a tragic dimension to his story. A tiny, low-resolution picture shows a man standing on a chair, hands tied in front of him. Behind him, a banner declares his captors’ “resolve to punish” those who served South Vietnam (p. 116). It was the shocking moment of the colonel’s public execution by a communist firing squad, dated circa August 1975. Subsequently, Espiritu found 32 websites featuring articles or videos about her uncle that treat his execution as “symbol and proof of communist atrocities” (p. 118). She also shares a photograph of four ARVN veterans posing in front of a street sign bearing her uncle’s name in Falls Church, Virginia, 2006, a manifestation of his status as iconic martyr and hero.

I can’t imagine how I would feel, much less think, if I had suddenly discovered that a deceased relative was living all over the Internet embodying the precise narrative I was trying to deconstruct. It makes me think of liberal white people who discover their relatives were slaveholders or worse, members of the Ku Klux Klan. I admire the way Espiritu handled her discovery, using Chapter 5 to present an extended obituary for her uncle that conveys love but restrains itself from eulogy. And then I wonder: what would it entail to plumb the depths of a discovery such as this one? I can only guess. Maybe it would bring up intense, complex, and unexpected grief. And probably even more: longing, desire, melancholy, sadness, regret, pride, shame, loneliness, fear or any of the emotions that pulse through the human heart. Espiritu hints as some of these when she describes herself as writing “from a haunted position,” looking for the “living effects of what seems to be over and done with” (p. 107).

By describing her position as “haunted,” Espiritu signals an astonishing vulnerability. Her own example shows that the wounds of the war still bleed. Recognizing that she has arrived at an unusual state of awareness through her intellectual exploration of “historical erasure,” Espiritu declares that she might need a method of “personal affect” to “reclaim the ‘something else’ that resides at the intersection between private loss and public commemoration” (P. 107-8). That something-else intersection sounds like the perfect place to start a new Vietnam War project aimed toward healing relationships and building world peace.

Buy the book through UC Press or Amazon.

Karín Aguilar-San Juan writes, teaches, and organizes for racial and social justice. She is an associate professor of American Studies at Macalester College in St. Paul, Minnesota. Her book Little Saigons: Staying Vietnamese in America examined the role of place for Vietnamese Americans. With a crew of four others, Karín is working on a short documentary film about an organic rice farm in the Philippines called “Rice: A Filipino Love Story.” http://pinayparincommunications.com