The Helicopter and the Pilot: Contemplating April 30th 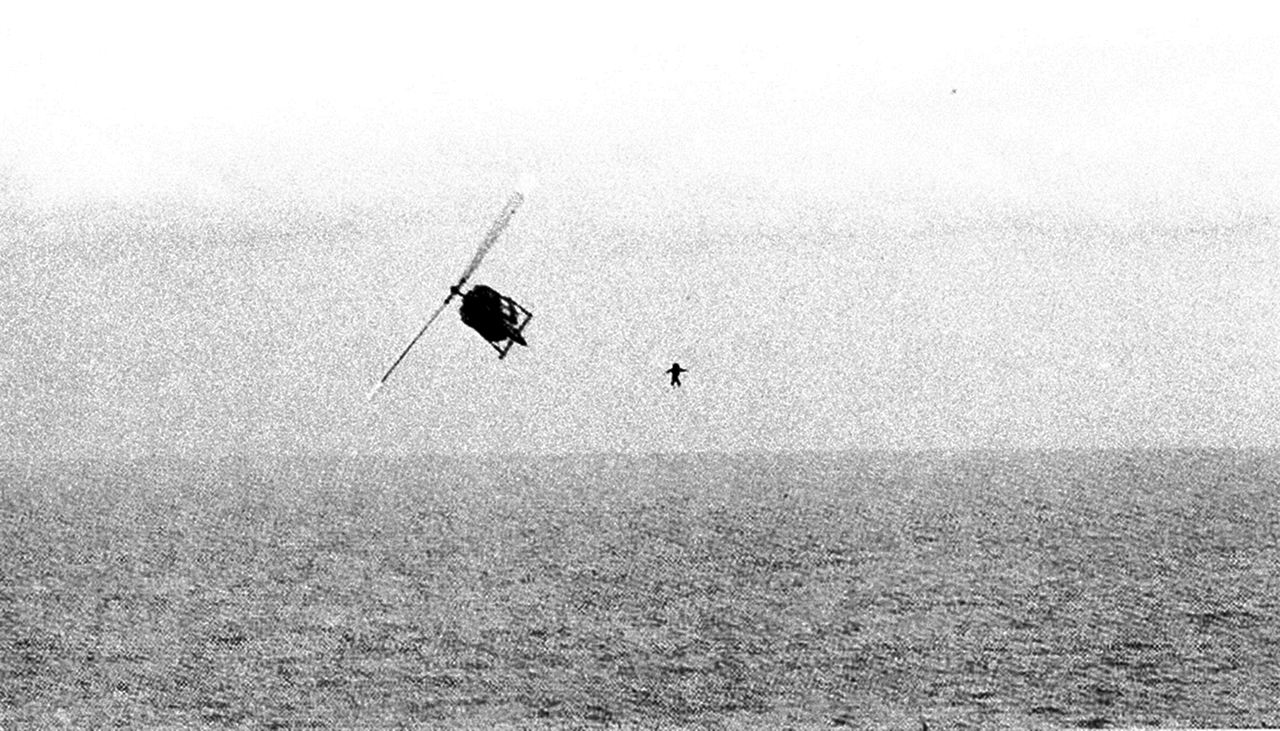 I had several ambitions for an April 30th post. I had thought of crowd-sourcing responses, maybe via facebook, and asking various Vietnamese diasporic writers a question the answers to which I imagined sourcing into a single multi-voiced post. I thought of asking a question like “how do we move forward while still honoring the past?” or a “what lies beyond (the wound)” type of question. I wanted to phrase it just right, so that it might illicit some rich and nuanced insights into how we might approach that basic equation: how one holds forth the memorialization of the (most visible and politically catalytic) historic event that made us, in a sense, into the diasporic beings we are; that fact combined with the pull to let go of the past in order to move healthily forward—I wanted to find some commentary that might address all those tensions involved. For we can all acknowledge, those of who are connected to it, that the date of April 30th is this type of holiday, a sober yet monumental one, that can reignite grief as much as it does gratitude, pride, angst, and more. Ultimately, though, I didn’t have time to source this type of post, so it remains out there: a wishful imagining of what would be the multi-voiced answer, what we out in the collective might tell one another, regarding how to solve that equation, or how to zero it out, balancing national and personal trauma in perfect ratio to healing.

I think to years back, more than a decade now, when on one April 30th I was invited to attend a Vietnamese student association’s event at a university. I was touched there by the beautiful singers singing in Vietnamese to make a statement of “let us not forget where we came from” as they lit candles to honor April 30th. They had invited me to perform too, and I had nothing of so sincere a nature to contribute, for my part, to honor any debt to lineage, or the weight of history carried or shared. I remember watching them, these young college students, and feeling deficient beside their earnestness and gracious ability to stand tall within the emotional and political complexity astir within that date. Later I said to one of the students who was driving me around that I feared what I had to offer was “not relevant”, by which I meant to them, to “our” community. To which he replied, wisely and kindly: “It’s all relevant.” In this: the benevolent, adaptive spirit of inheritors of worlds turned upside down.

But, to return to contemplation of the date and how we are to commemorate it. The post I did not curate for this year, 2018, which would be Year 43 in this new cycle of the Vietnamese (diasporic) identity, Year 43 in the calendar of the uprooted Vietnamese: what I wanted to ask my peers, truly, was a ‘how do we move forward’ and ‘what is next’ type of question. Surely there are military memories to ascribe to the date; there are waves of grief and regret, of significant and meaningful sentiment, to revisit; there is the immense collective recollection of an emotional—and literal—tumbling that was felt, the sensation as of one tumbling into a sea at storm; of many bodies, man and machine, tumbling, falling, out of their former positions. The photograph at the top of this post, of the helicopter and the pilot, I have returned to it time and again, because for me it represents the Vietnamese identity being both dissolved and made possible, in a single frozen image. The pilot has jumped out of the helicopter, and both bodies are posed in midair moments before they will descend each into the sea. The story that extends—that we know by now quite well—is that one of these bodies will survive that suicidal dive into the sea; and one will not. So it is a picture, also, in essence, of the Vietnamese being (in the figure of the leaping pilot) becoming (potentially) free – of machine, of nation, of reliance upon both or either machine or nation, whichever nation’s machines you wish to consider. The helicopter, pilot-less, will drown in the sea. The picture tells us that what was created by, what carried and facilitated the machinery of war, in Vietnam at least, dies, begins here to be visually engulfed, while the human body that dives and falls can and will swim. The identity of a nation in free-fall. The smallness of the individual against the canvas. It is heartbreaking at the same time it is breathtaking.

This particular photograph is a public domain photograph; it was taken by someone connected to the U.S. military, standing, likely, on the deck of an air carrier looking out to the South China Sea. There are, of course, other famous photographs of helicopters and the sea that were taken also on or near April 30th . I want to place these helicopter photographs next to one another, and consider something. The differences between them. 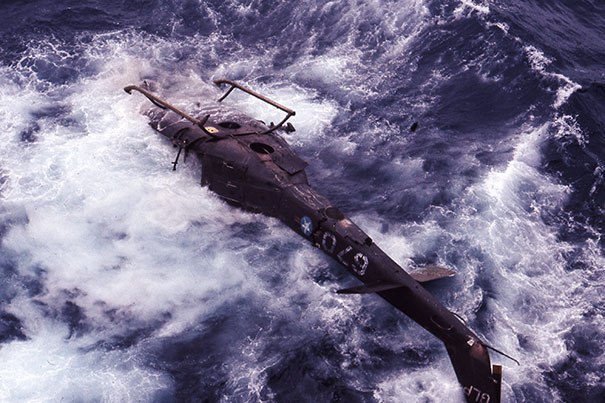 The more popular photographs of this date are the ones that show the helicopters being pushed (by men) into the sea from the deck of naval air carriers; these pictures stir the imagination to follow the plunge of the helicopters. And so one might say the focal point of these photos, of their ethos, is really on the death of the helicopters. They are photographs that lament, or express surprise at, the loss of what occurred, whatever was marked, by April 30th; they marvel and gasp (or prompt us to) at the failure of the machinery, and the material expense of abandoning such machinery, at the Fall of Saigon. The pictures of the helicopters in the water are pictures of what America had to throw away, on that pinnacle date. Thinking about it like this, the photo of the helicopter with its belly upturned as it falls into the sea, is almost tender—it captures an uncharacteristic vulnerability to see the machine-beast sacrificed to the sea like this. This is all striking, of course. But I want to point out that the other photograph—the one I’ve been more fixated on over the years—has a different focal point. Which is, the relationship between the pilot and the helicopter and the sea: a triangulation of sorts. This photograph takes a view that forces us to spotlight both the human body and the machine one, and to marvel at the fall of both, together and apart, two bodies that moments before were operating together symbiotically (one could not operate at that height without the help of the other), and now they are separating, have just separated, to be precise, and the photograph memorializes this moment. It seems apparent to me this photograph offers a more ambiguous portrayal—one could go in the direction of either lament or celebration, gasp or marvel—in its picturing of April 30th.

And so perhaps, the real question I want to ask on this day, that I would want to ask my fellow inheritors of this free-fall moment in history (which can be read as the free-fall into or out of an identity, as well the free-fall of either the machine or the man) may be: How will you read it? Which element—helicopter or man—will you grieve for, more? or will you marvel at more, and why? Which one will you—instinctively, inside, at the first moment of observation—root for, worry for, and picture the next movements (the landing) of? Will your imagination follow the helicopter as it sinks to its watery grave, or will your imagination follow the (Vietnamese) man, as he hits the water and holds his breath and then starts kicking and pulling, to get to the next place he needs to get to, to be free and keep living? And how will you read it onward, in the next frame and the next one, and in the longer series of pictures yet to unfold, beyond this one?

Dao Strom is the author of a bilingual poetry/art book, You Will Always Be Someone From Somewhere Else (AJAR Press, 2018), a hybrid-forms memoir We Were Meant To Be a Gentle People + music album East/West (2015), and two books of fiction, The Gentle Order of Girls and Boys (2006) and Grass Roof, Tin Roof (2003). Her work has received support from the Creative Capital Foundation, RACC (Regional Arts & Culture Council), Oregon Arts Commission, National Endowment for the Arts, Precipice Fund, and others. She is the editor of diaCRITICS and co-founder of the collective She Who Has No Master(s).