The essay below is a reprint of a piece I composed on April 30/May 1st, in 2014, during a return trip to Viet Nam; it was posted first here on diaCRITICS and then appeared as an essay in 3:AM Magazine. The observations (via words and image) continued to morph, appearing differently arranged in my two hybrid books—until by 2018 all that I wanted to say of the story had become distilled down to just these two lines:

On the eve of the anniversary we came down from the mountain-house.
The taxi driver who took us back to the city had a tattoo on his wrist, it read: “1975.”

and the original image fragmented to this: 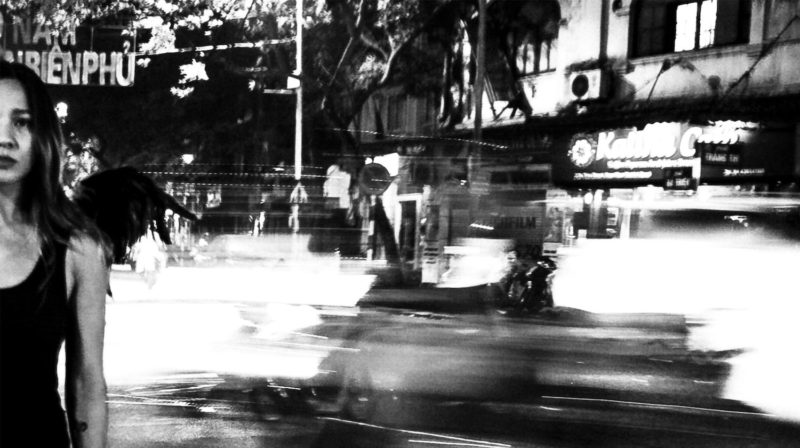 This is the version of the sequence that appears in my hybrid poetry-art book, You Will Always Be Someone From Somewhere Else (Ajar Press, 2018), which also renders it into a bilingual English-Vietnamese offering. (It was published also as an art excerpt in The Offing.)

I mention all of these different versions only because the process of fragmenting both haunts and feeds me. There is also some value—I believe—in pointing out the seams, the assembly and dis-assembly, involved in the process of arriving at any piece of composition; it is also maybe to say, or to point out, that a work, no matter how much work you’ve put into it, can be continually undone, still evolving, transient or transit to somewhere next, redacted, revised, (also: erased or repurposed), and maybe in acknowledging these processes we also challenge, at least a little, that tendency which would have us believe that one form, one shape or set of patterns or way of arranging a structure, into one destination, whether of art or living, is absolute or perfect or final, and will last forever. Because it probably won’t.

From William Tronzo, The Fragment, An Incomplete History:
“It is the fragment and the fragmentary state that are the enduring and normative conditions… Any walk through an art museum will support this thesis… It is the whole that is fragile, transitory, and poignant. And precious and freighted though the fragment may be, it is in reality tough and a survivor.”

Although this quote comes from an art historian talking about antiquities of visual art, the contemplation seems transferrable, to me, to a contemplation of fragments of many kinds, from the material (i.e. artifacts of cultural productions) to the immaterial, i.e. the ineffable personage of a diasporic person who is made up of multiple fragments and fragmentations of culture, memory, and histories. Thus I see: how I have fallen into a practice of fragmenting my own work as means of configuring, or trying to configure, understanding of my own survival, or: understanding of what survives.

But, back to the date in memoriam. It was April 30th and I was in Hanoi, with my partner and with a pair of wings. We took photographs in traffic on that evening, and then went back to our hotel room. I don’t know if I began writing the essay that night, but do remember sitting in my hotel bed writing on the morning of May 1st.

Here are some outtakes and other renditions of images from the Hanoi/April 30th sequence. Here are some thoughts I was having on that anniversary. 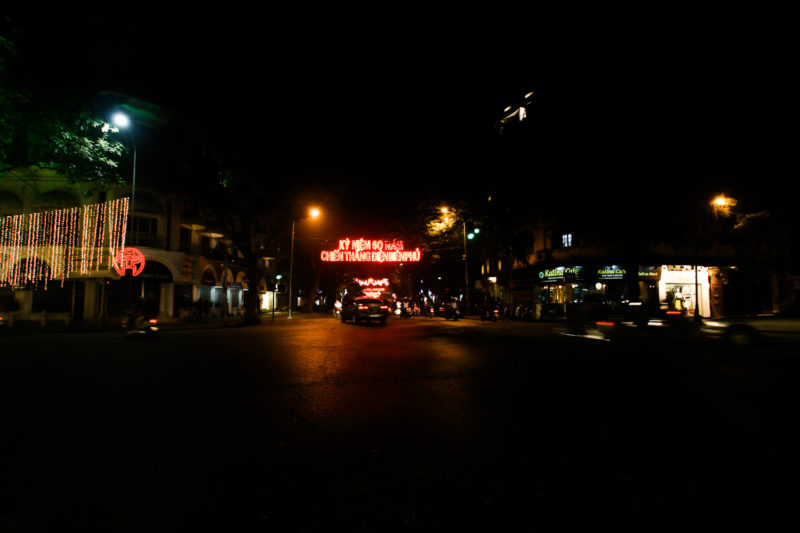 From the Other Shore

April 30th/May 1st, 2014 — I am in a hotel room in Hanoi, Vietnam. Drove down from the mountain area of Tam Dao National Park yesterday on the 30th, entered the bustling Hanoi streets to be met by the sight of red flags with single yellow stars hanging in front of most shops, and the nighttime traffic fairly insane, the borders of Hoan Kiem Lake festively and beautifully lit up. Throngs of people – mostly young (too young to actually remember April 30, 1975) – cruising and hackey-sacking and eating ice cream and clustering the lake shore paths and the streets. The taxi driver who took us from Tam Dao to Hanoi had a tattoo on his arm: it said “1975.”

This is the first time I have experienced April 30th in the geography of where it is celebrated as “Reunification Day” – versus the denomination it was given by both the South Vietnamese and the Americans, who remember it as “The Fall of Saigon” and the whole month as “Black April” — a contradiction of spring, of union, a Biblical-themed casting out of the garden, in fact; a common consequence – classically – to the sin and degradation and over-reaching that humans so often have, historically, tended toward. But here, on Vietnamese ground, technically one day after I left 39 years ago, now I get to witness it as what it is here – a day of celebration, of patriotism, at least on its surface appearance – the equivalent of the Fourth of July to Americans: which, in America, one might choose to celebrate with either sincerity or irony, depending on however it is you feel about it.

Patriotism, as I see it at least, is a naive and necessarily semi-blind position to take, whatever your side of the coin may be. I’ve never been able to be absolutely sincere in my regard of it, whatever side I’ve strayed to stand along. Maybe I’ve always felt a little more comfortable hanging in the shadows, on the peripheries of the festivities, looking in, wondering slightly.

It has been more than 15 years since I was here last. The last time, which was the first time I had come back since that “Fall” of 1975, it was 1996 and I was 23 years old. It was an emotional trip, largely because I encountered cousins who hadn’t seen me since  1975 and I also met my birth father for the first time since my infancy – it was a first return to a Vietnam that I had not expected ever to return to or to know, and that had not expected ever to see me (or any remnants of my family) again.

This time, though, I am older and returns are a far more common occurrence. Overseas Vietnamese come and go now; some have even returned to live here indefinitely. For many, it’s no big deal anymore. The divide is not the impassable sea, storm, unknown, that it once was. That I had gotten so used to residing on the other side of.

And yet: I encounter discomfiting truths here, within and outside of myself. How I have for years longed to come back, felt some piece of me missing for not reckoning with the Vietnam that was left behind, and then to come back and have to admit the ways I still feel I do not belong.

One big thing is: I don’t speak the language. Though I have the same skin and some aspects of the faces here, I also do not look like the other women here; people stare at me. I travel also in the company of white men – my closest (and favorite) two companions in the world have joined me here: my half-white, half-Vietnamese son; my husband, a well-traveled but still born-and-bred Californian. My clothes stand out here too, as do – it seems – my tattoos.

In the mountain town of Tam Dao, a man in the market points to the Chinese character tattoos on my right forearm – which are the ancient characters for my given name “Tiêu-Dao” – and says: “Not good.” I ask him why, try to indicate that they are my name, that they are “Han script,” or chữ Nôm in fact, which, technically, is still Vietnamese. He says, “No good, this Vietnam.” I understand that he is only citing the long well-known animosity – the resistance – the Vietnamese have harbored against China, due to the previous thousand years of invasions and warfare they have waged with the Chinese. But my understanding, as the daughter of former writers and scholars, is also that the Vietnamese language borrowed from the Chinese, and, even if it was controversial and at times not welcome, some of this intermingling was yet also poetic and productive — before Vietnam had her own written language, her scribes adapted the Chinese script into a form called chữ Nôm, or chữ Hán. The Vietnamese also borrowed words and phrases from the Chinese; my given name, Tiêu-Dao, was one of these. My mother has said it is an unusual name to give to a Vietnamese child because it essentially derives from a philosophical phrase about “wandering” – something Vietnamese people, who like to keep their families together, would not wish upon (especially) a daughter. Most of my mother’s family took the name at its literal meaning, though – the two words separately translate as “pepper” and “knife” – hence the nickname my cousins used to use for me when I was young: “Pepper-knife.”

Once, I encountered a Taiwanese traveler (who stayed a few days in our AirBnB room in Portland, Ore.) who recognized the characters on my arm as meaning, in his words, “Freedom.” I can’t say I have inhabited the name to quite that degree of meaning, though.

I honestly don’t know which is worse – if we really stop to think about it. The language appropriated via the Chinese characters tattooed on my arm; or the one fed to the Vietnamese via abstract Latinate markings in order to teach them the Bible.

This is hardly something I can articulate to the man in the Tam Dao market, however. He is friendly enough to me, though, despite the nationalistically offending nature of my tattoos, and holds out his cigarette pack, offering me one. I appreciate this gesture, though I don’t smoke; I smile and decline, tell him no thank you.

The nature of words, the different naming of same points in history, the ways in which we do or do not inhabit the names – the first identities – we are given; the ways we commemorate – define, try to claim ownership of – events of the past; the ways we choose to remember or deny or silence or forget:  these are all matters I am wrestling with in being here, especially on this particular “holiday.”

I don’t have an easy take on it at the moment.

All I can say for sure is this: language has its limitations. Language – from the very point we attempt to codify it, to capture it, to call it our own, or to insist via our version of it – becomes potentially unreliable.

The same event, traumatic movements of people on either side of a forming chasm, no matter how you look at it, has no one definitive name. Can really and truly be given no name. Because maybe there are no words for it, in a true manner of perceiving. 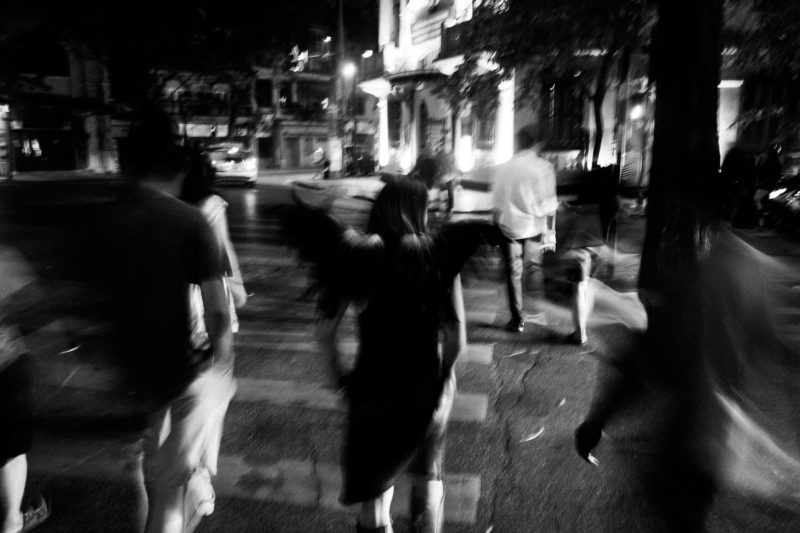 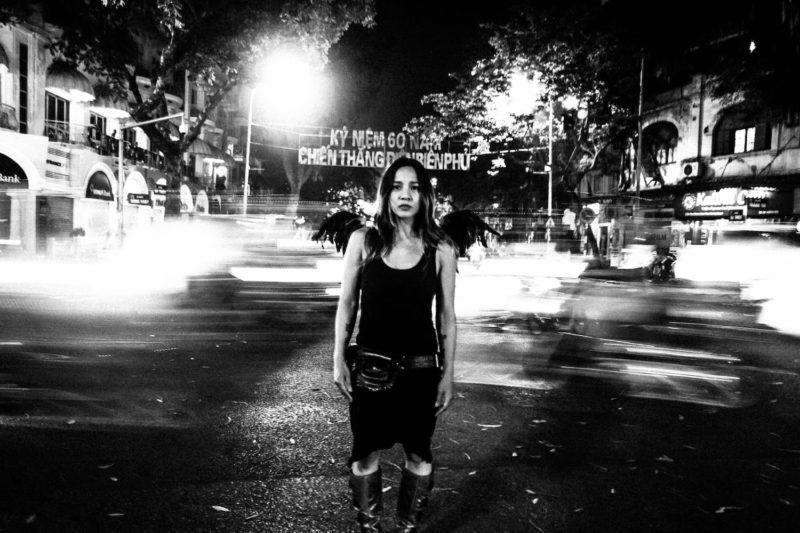 Dao Strom is the editor of diaCRITICS and co-founder of She Who Has No Master(s), a collective art project of women writers of the Vietnamese diaspora. More about her work can be found at: daostrom.com

All images by Dao Strom (with photography collaboration by Kyle Macdonald).