When 17-year-old Vivian Pham took to the stage in San Francisco at the International Congress of Youth Voices, she spoke of the important lessons we could learn from global colonial histories. Vivian spoke with conviction and keen insight, saying, “I used to dream of a Vietnam of simplicity and prosperity, of thatch roof huts and banana leaves and lotus flowers. But this Vietnam only exists in my imagination, which I’m still guilty of tricking myself into thinking is my memory. We cannot romanticise a past that never was, and only choose to remember the innocence of our history. Spoiler alert: nobody’s history is innocent. We must be brave enough to claim it all.”

Her speech was excerpted in The Guardian but is published in full below with her permission.

We are all gathered here today, speaking, sharing, discussing, and, at this very moment, standing in the shadow of the future. This is, already, a historical event. Whereas the most common way of mapping time is to think of the future as ahead of us, and the past as behind, I remember reading somewhere that the Aymara people of South America view time in the reverse. That is, the past is ahead, as we have already witnessed it, and the future is behind, as we have not yet seen it. For as long as I can remember, I’ve been obsessed with history because I believe that the past is not behind us; it is something not to be forgotten. The past is not a wound for someone to tell you to ‘get over’. We carry it within us, we are our history. It is only by peering into the past that we can even begin to understand why the world we have inherited is the way that it is.

For example, it has all to do with history and very little to do with luck, that I am entitled to a free education, clean water and food, while children all over the world are denied all of these rights; routinely, systematically, criminally. These children are not so much born into a life of poverty as they are born out of a history of colonialism, oppression and war. Our lives are intimately linked; the legacy of the British Empire which lives on in Australia and which gives me free healthcare is precisely the one responsible for the malnutrition in India. Just as the industrialisation of the British Empire was rooted in the enslavement and deliberate de-industrialisation of its colonies, and just as my prospects of getting rich depend on keeping you poor, the ways in which our lives intersect have never been more apparent than in today’s global capitalist economy. We can no longer pretend that this is not true. The people living in the centre of Empire all those years ago could ignore the blood that spilled out of the far-flung colonies of Africa, Asia and Latin America. You and I live side by side. This is, for many, an inconvenient truth, but I believe that the brutality of our times binds us together; and, in any case, ignorance has never been an accepted currency for bliss. James Baldwin says it best: “People pay for what they do, and still more for what they have allowed themselves to become. And they pay for it very simply; by the lives they lead.”

If we are to change the world, we must first understand how it came to be like this. This places an immense responsibility on the systems of knowledge and education at play in our societies. In Australia, and other nations within the Euro-American Empire, our classrooms keep history hostage. Many of the disenfranchised in our societies are those who have been deliberately omitted from our construction of history. If we are to believe what we are taught, all the good in the world exists by the graces of ancient Greece or the Enlightenment. We reduce China’s thousands-year-old civilisation to a foot binding custom, shelve India’s countless scientific discoveries, blot out the glory of Iraq’s ancient libraries and threaten Iran’s poetic tradition with nuclear annihilation.

We insist that we owe the world to a procession of distinguished European men. It can hardly come as a surprise, then, when the children we have taught to kneel can no longer stand. This functional miseducation affects all; it is a gross distortion of our common heritage. To acknowledge the historical contributions made by every culture is to grasp the shared ownership we have over the world, our past and most importantly, our future. This grasping, this sharing, this understanding, is not only a revelation and a joy, but an act of protest. We stand taller because our belief in something bigger than ourselves straightens our spine. We realise that we too, each of us, have a right to be here. Revolutions begin within the margins of a single mind.

Conversely, one of the things that has been most revolutionary, and most revealing, to me, is to recognise the imperialists, oppressors, fanatics and dictators in history that look like me. Up until very recently, I genuinely believed that every white person in the world, somewhere, anywhere, was plotting my destruction and trying to colonise me. And I used to dream of travelling back in time to a Vietnam hidden from the French, unscathed from the war waged in the name of Americans, that spat my father and millions more out of their country, forced them onto tiny boats in the middle of the ocean, praying for water to be more than water, for wood to be more than the weight it can hold.

I used to dream of a simpler time, a Vietnam of thatch roof huts and banana leaves and lotus flowers. But this Vietnam only exists in my imagination. We must not romanticise a past that never was, or choose only to remember the innocence of our history. Spoiler alert: Nobody’s history is innocent. We must be brave enough to claim it all. People like me, who by today’s standards are referred to as ‘people of colour’ or ‘minority groups’, belong to histories which are not only as tremendous, as grand, and as civilised as the Europeans, but as brutal. People with faces like mine have not always been victims. We have had our empires too. We have been both the coloniser and the colonised; we know, intimately, both ends of the whip, have felt it in our hands and against our backs. I think sometimes, especially in a safe space like this, it is very easy to hold hands and chant together by the fire of our own righteousness. It is very easy to think that we are in a particularly awful situation, at the mercy of particularly awful forces. But by understanding the mentality of imperialism, which is, essentially, a struggle for authority, and the rewards of plunder, we can make sure that we don’t replicate the same power imbalances wearing different faces.

As strange as it sounds, it can be very therapeutic to think that almost everyone else in history had a go at mass murder, genocide, pillage and rape; and that the European empire just happened to be the best at it. There is at least a glimmer of truth in that. And they did it so well, so efficiently, in fact, that they managed to colonise every single country on earth, with the exception of only five. This is just as ridiculous as it sounds, and to grasp how nonsensical it is can be actually extremely empowering. The fact that such a small fraction of the world managed to enslave the other two thirds of humanity is an anomaly, and I believe that this cannot be sustained for very much longer. Although a world moulded by European colonialism is all that we know, it is immensely eye-opening to note that things weren’t always like this. Before only a few hundred years ago, China had consistently been the richest civilisation on earth for thousands of years. While Europe was stuck in its Dark Ages, still believing the world to be flat and diseases to be God’s punishment for sin, scientists in the Arabic speaking world were advancing medicine, mathematics and astronomy. Just before the British arrived at its shore, India owned 23% of the shares of the world economy.

The world, in its present state, is simply unsustainable. It is in reset mode. I believe we are witnessing the fall of the very word ’empire’ as we know it, and hope there will never be another one again. Old power structures are scrambling for control while new powers are arising all over the world; in Asia, in Africa, in Latin America. The Third World holds the heart of our future, and we must speak to it, listen to it, not as an act of charity but rather one of solidarity with those nations whose poverty is rooted in our wealth.

We must insist on the political and economic freedom of our brothers and sisters. It is not as simple as going to a starving village and handing out bread. It is much more than that. It is about insisting upon dignity, for yourself and for others. Che Guevara said: “Let the flag under which we fight be the sacred cause of redeeming humanity, so that to die under the flag of Vietnam, of Venezuela, of Guatemala, of Laos, of Guinea, of Colombia, of Bolivia, of Brazil – to name only a few scenes of today’s armed struggle – will be equally glorious and desirable for an American, an Asian, an African, and even a European.”

History teaches us that the desire to conquer pulses through our very blood; it has shaped the world as we know it, forged paths out of the wilderness and built kingdoms out of ruins, again and again. It is the heart of the human story. There are countless empires to come, “in states unborn and accents yet unknown!” Therefore, I am not only interested in assigning blame. I believe that we are all mirrors to each other, endlessly reflecting each flaw and each triumph, bound by the same bloody history, responsible for each other, simply because we are alive. If the past is ahead of us, and the future behind, and we are all now standing together in the shadow of our future, well, I can offer no prophecies. I don’t know where we’re headed, but I hope we’re walking towards a future that remembers our name. 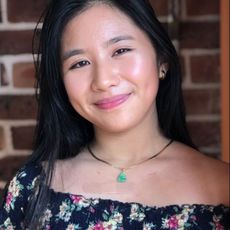 Vivian Pham was one of the delegates at the inaugural International Congress of Youth Voices in San Francisco. In August 2018 the congress brought together nearly 100 students aged 16 to 20 from around the world to learn with and from accomplished writers, activists and elected officials.

Vivian was born in Orange County, California, and emigrated to Sydney, Australia, with her family when she was very young. Pham is most passionate about issues surrounding post-colonialism, feminism, prison reform, structuralized racism, and the Vietnamese diaspora. Her father, her greatest role model, escaped Vietnam and came to the United States when he was 17.

In 2017, Vivian wrote a novel with Sydney Story Factory, a nonprofit youth writing center. That novel has been acquired by Penguin Random House and is due for publication in early 2020. Her short story, “The Past Does Not Sleep Soundly”, was published by Southerly in 2018. Through writing and inventing fiction, Pham feels as if she is preserving history.

This post was curated and edited by our Contributing Editor for Australia, Sheila Ngoc Pham.