To Find a Tribe: What the Census Meant to My Father & Means to Me

2020 would have been remarkable enough as just the Year of the Census, in the absence of a pandemic creating uncertainty and turmoil, a social justice movement, and a Presidential election cycle churning with epic potential political repercussions. Rather than drawing away attention, these other lashing forces should crystallize for us just how essential and precious the Census’ act of enumeration is—the commitment to literally have every life in America count, equally and transparently. Because of the public health emergency, the Census Bureau has extended its deadline to track non-responders and conduct follow-up interviews with submitters through the end of September which is important since if there was ever a time to be counted, it’s now.

For a dry and bureaucratic exercise, the Census evokes incredibly fraught debates, precisely because of its far-reaching influence on the distribution of political power, federal funds, and America’s understanding of itself. As the media began covering the Census in late 2019, I read an article about projections that white Americans would lose their majority in 2044. The binarism of that statement made some demographers and political scientists uncomfortable because they were skeptical of relying on racial/ethnic categories still shifting under our feet, and worried about backlash from white nationalists.

The debate touched a nerve in me, recalling my father who died eight months earlier. For him, the Census was an uplifting opportunity to promote his tribe. For me, it’s more complicated: it supports democracy through better representation but invites interpretations that tend to divide us. I was caught in an arc of grieving as I tried to reconcile the push and pull of our relationship while thinking of the census.

My father was the perfect community outreach coordinator for the 2000 Census. He taught English as a second language in Philadelphia public schools to immigrant kids for thirty years, many from our native Vietnam. His sense of obligation to help, as someone familiar with America from studying here in the 1960’s, meant he also played social worker, counselor, translator, and legal advisor to many students’ families. My father led the local Vietnamese American Association for several years. And when we went to the Catholic church in South Philly ministering to the largest concentration of Vietnamese in the region, the priest walked him to the front pew of honor. If America wanted an ambassador for its grand tallying effort, few had more social capital and credibility in the Vietnamese community.

Engaging his people in the Census was a natural extension of my dad’s advocacy – to ensure Vietnamese representation in America’s self-portrait. He went all-in, knocking door to door, making speeches, strewing Census infomaterials over various neighborhoods from boxes of the stuff in his bedroom and basement. Census swag he gifted us back then still lurks in my house; I can’t part with the baseball caps and red and white mugs matching nothing else.

For my father, Census participation was more about tribe than serving the greater body politic. His childhood in north Vietnam spanned turbulent decades when that troubled patch of Indochina passed violently back and forth through French, Japanese, and Communist hands, abetted by American, Soviet and Chinese meddling. Communist revolutionaries stripped his family’s property, stoned his uncle to death, and left his father to die in prison for the sins of owning land and trying to stay politically neutral. He was 17 when Vietnam divided in 1954 and migrated to Saigon with nothing to his name. He clawed his way to a middle-class life while skeptical about the moral standing and sustainability of the South Vietnamese government, only to lose everything again in 1975, when we fled to America for his second starting-over.

Through it all, what sustained him was family, fellowship in the Catholicism he adopted in Saigon, and his band of teacher friends who collectively tried to modernize Vietnamese education and some of whom he reunited with in the States. He learned through his bones that regimes come and go, but tribes endure.

That belief also fed his puzzlement over my pull to public service –  why I would rather fix social problems on behalf of strangers than go into private medical practice. He was deeply grateful for American citizenship, but what the Census contributed to the strength of its democracy was a lesser concern to him than the welfare of his community.

Tribe means something different to me. I was seven years old when we immigrated. I learned to speak accent-free English in one summer and was the first Asian student at my school. I found that exposure to Vietnamese tones had nurtured neural wiring my schoolmates did not seem to have or want to use, such that I could mimic all their varied speech patterns. I slipped in and out of this and that group, a lingual Zelig, sounding just enough like each pack to stay and note their other habits.

I learned about my new world by trying on other people’s cultural shoes. I could gab about Dorothy Sayers novels with girlfriends whose parents were professors, and slum it with streetwise kids at public summer camps. I listened to British Isles folk music because a favorite teacher loved it, and now I float in a broader Anglo-American folk music and dance scene with my Jewish husband and our kids. Along the way, I redefined my own Vietnamese-ness, choosing what cultural tics to retain and integrate into my complex, evolving identity.

Over time, traversing different groups became habit. It turned me into an interpreter and ambassador. I carried experiences from formative years as a doctor caring for poor communities into more sterile research settings where I analyzed the role money plays in health care while nagged by vivid memories of how distortions in those money flows left chaos and unmet needs in people’s lives. When I left research to enter government, I found myself caught at times between other leaders who had to make many consequential decisions a day, and analysts who pleaded with me as a kindred spirit to slow things down just long enough to allow data and evidence some play. And as I moved into the private sector with its anti-regulatory reflexes, my corporate and former government colleagues both joked about whether I had just left or joined the dark side.

My cultural mongrelism perplexed my dad. It was odd enough for me to have hobbies not in the mainstream, but in his zero-sum-inflected sense of tribe, my taking on a new allegiance carried the risk of needing to sacrifice something else to make room for it. Maybe he was afraid I would jettison the things I inherited from him. Near the end of his life, I finally saw glimmers of his understanding that I am one-hundred percent Vietnamese, one-hundred percent doctor, and one-hundred percent of every other one of my identities.

My kind of passaging between tribes leaves marks. It stretches your understanding of what is normal, and tolerance for the unfamiliar. It forces you to hold multiple, sometimes conflicting truths at once, and forbids black and white judgments. It leaves you feeling at once homeless and at home everywhere. And in transcendent moments, it changes how other people see you. During a medical school rotation on a Native American reservation, I was taken aback that patients asked me but not my peers many personal questions on first meeting – where from in Asia? Lived in what big cities? Have how many siblings and cousins? My attending explained that I looked and acted more familiar and accessible to them than the Caucasian doctors; they were trying to figure out which tribe I belonged to!

The longer American Community Survey portion of the Census targeted a subset of respondents asking policy relevant questions about health insurance, commuting times, and home heating fuel, but not religious affiliation, composition of social networks, or leisure activities. I’m not supposing a decennial government survey could or should chase every cultural detail. But we shouldn’t be surprised that simplistic categories promote simplistic and defeatist conclusions like the diminishing of white America rather than the optimism of a blended and wondrously complex national fabric.

My dad adored his mixed-race grandbabies. In his later years, he traveled widely, gamely tried listening to jazz, and even got involved in Republican politics. But he was never able to truly feel at home beyond the Vietnamese community. Maybe what began as a survival strategy for me is also a luxury; all his unbearable losses led to these immense gifts of security and prosperity for his children in America, which allows for my elastic allegiances.

For the sake of the body politic, I cheer the Census and want it to count exhaustively and fairly. I just hope it enhances rather than blunts our reflex to reach out and let in, to embody an existence somewhere between a mirror and a door. 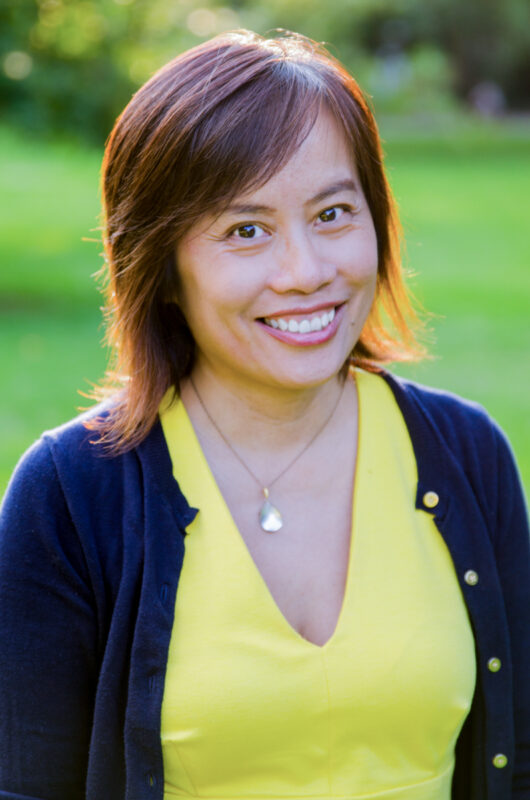 Born in Saigon and raised in Philadelphia, Hoangmai Pham is a writer and artist by night (www.maiphamart.com ) and a physician and health policy wonk by day. She implemented Obamacare as the Chief Innovation Officer for Medicare, and was a Fortune 500 executive. She lives in Washington DC with three mathematicians of various ages and votes reliably.