News came to me of two men falling from the sky
after having been birthed from the steel,
burning carcass of their mother.
Like angels, my men tell me, wings sprouted
from them like God granting miracles
for their safe delivery on Earth.
Their mother’s wrecked and ruined body plummeted,
her placenta and black blood stained the blue fabric of heaven.
The men watched as the newborns fell from the sky,
floating forever and forever, gliding toward earth,
their feet waiting to touch what
was firm and sure beneath them.

One furled his wings,
the other severed his ties to free himself
from the banyan’s thick arms,
and together the men marched
through thicket and reeds, through vine-covered trees
so abundant and green, so filled with the voices
of birds and insects and lizards and snakes,
the jungle foreign to what they were accustomed to:
flat fields of corn and wheat, barley and rice,
their earth scalped of tall grass
and rolled into dry bales for feeding.

Still, the jungle grew denser
as they listened to the trees guide
them until they emerged, parched and hungry,
into an open field
filled with my children
unaware of the hell they had been born into,
of what will be their Vietnam. 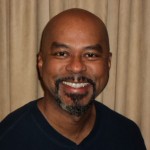 Genaro Kỳ Lý Smith was born in Nha Trang, Vietnam in 1968. He earned a B.A. in English from California State University, Northridge in 1993. He later earned an M.A. and M.F.A. in creative writing from McNeese State University in Lake Charles, LA in 1999. He resides in Ruston with his wife Robyn and their two daughters, Layla and Naomi. He is the author of three books: The Land Baron’s Sun: The Story of Lý Loc and His Seven Wives (2016 winner of the Indie Book Awards in poetry); The Land South of the Clouds (2017 second place for the Indie Book Awards in multicultural fiction); and The Beautiful Ones Are Not Yet Born: Short Stories and a Novella. He has been teaching literature, composition, and creative writing at Louisiana Tech University since 1999.