A Deep Gulf: Q&A with Filmmaker Tim Tsai on His Documentary, “Seadrift”

A tragedy is at the the center of Tim Tsai’s documentary about a small coastal Texan town. It’s a tragedy of a life lost, a divided community, and of how some Vietnamese refugees were never able to make a home in Seadrift, Texas. Tsai skillfully draws out the story of the local fishermen and their turf war back in the 1970’s in Seadrift. The mostly white Seadrift residents are resentful of their new neighbors, the Vietnamese who had moved into town providing cheap labor to the seafood processing plants and eventually go on to buy their own fishing boats. It’s a specific kind of American tale that plays out violently, yet manages to show the resilience of a community healing. We were able to speak with Tsai about the documentary, what it was like revisiting traumatic events with the residents, and how compassion was at the heart of this film.

Seadrift is available to stream on iTunes and Amazon and on DVD and blu-ray.
Visit seadriftfilm.com/watch for more info.

Sign up for updates at seadriftfilm.com to learn about upcoming virtual and physical screenings and discussions. 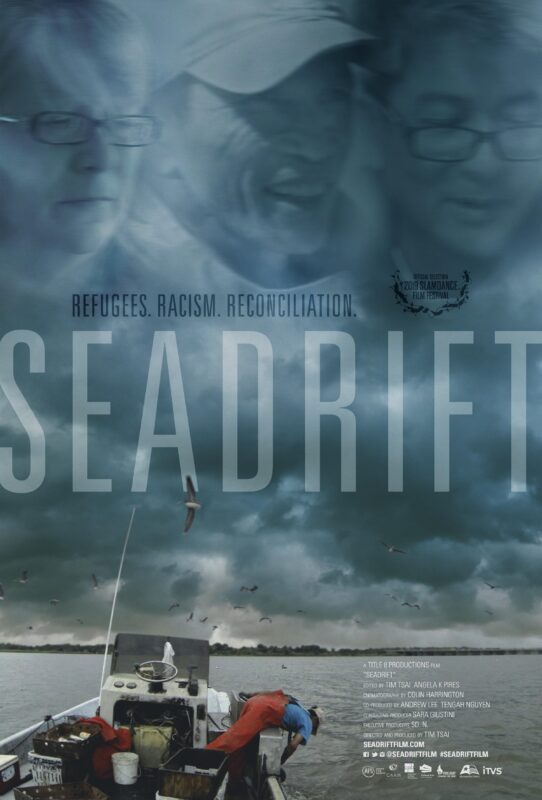 How did you become involved in telling this narrative? Was there a personal connection that sparked interest for you to tell the story of Seadrift?

TIM TSAI: I first read about the events of Seadrift in 2010, through a chapter in the book “Asian Texans” by Irwin Tang, and I was floored. As a Taiwanese American who immigrated to the U.S. in my early teens, I can imagine some of the challenges the Vietnamese community in Seadrift must’ve faced as they adjusted to life in a foreign land, but the racial hostilities they encountered, as well as the trauma and hardship they had already endured as war refugees, was beyond what I could truly grasp based on my own experiences. I was also interested in what Seadrift was like today: are the Vietnamese still there? Is it possible for a community to heal from past division and violence? If yes, how? I was compelled to find out more.

Decades have passed since the violent incident that’s at the center of this documentary, and I wondered about how you were able to get participants of this film to talk about such a period of trauma and conflict in their lives and livelihood? Since the violence that’s the central story of this documentary has to do with a murder by a Vietnamese refugee of a white man, I was surprised to see so many of the Vietnamese Seadrift residents who were open to speaking with you. Was there anything that struck you about these folks wanting to tell their story? Were there people who you wished you were able to include in the film, besides the folks who have passed away?

When I began visiting commercial fishing communities along the Gulf Coast, it was clear that many still harbored strong feelings about the arrival of the Vietnamese, and were reluctant to share their views on camera, especially as we got closer to those directly involved or impacted by the shooting in Seadrift and its aftermath. I found out later there was good reason for this mistrust besides my status as an outsider – many felt mischaracterized and betrayed by the media at the time. It took several months for Beth Aplin Martin, whose father was shot and killed by a Vietnamese refugee at the public docks in Seadrift, to agree to share her experience with us, and another several months before we conducted the emotional interview that appears in the film. Beth was reluctant to participate throughout this process, but she also never said no outright. During this time, other relatives and former colleagues of her father declined to be interviewed, and I believe Beth was finally moved to participate because she felt her family’s side of the story would not be told otherwise.

On the Vietnamese side, access would not have been possible without our advisor and associate producer Dr. Thao Ha, who wrote the chapter in “Asian Texans” that inspired the making of this film. Dr Ha encouraged us throughout the making of the film, and recruited her father to come with us to Seadrift as our interpreter when we hit roadblocks in the Vietnamese community. It was largely thanks to him, a refugee and former South Vietnamese air force pilot, that we were able to convince our main Vietnamese storytellers to be a part of the film.

Compassion was actually the furthest thing from my mind when I set out to make this film. After researching the incident in Seadrift and subsequent hostilities across the Gulf Coast, I saw the conflict as a clear case of racism and xenophobia directed towards a vulnerable group, who in turn stood their ground and fought back. As I began to speak to Seadrift residents, however, a more complicated picture of what happened took shape, one that’s inseparable from racism, sure, but also deeply mired in misunderstandings and lack of resources.  It became, for me, a tragic conflict without a clear antagonist, and I felt, for the film to contribute to this community’s healing, I had a responsibility to portray both sides as truthfully as I can, and to examine what happened without oversimplification or resorting to sensationalism.

I really appreciated how the documentary is specifically focused on Seadrift and this community, but refuses to contextualize the story of Seadrift as something that happened in a vacuum. Yes, there are the interpersonal relationships and individual/community struggles from long time residents and new arrivals. But there’s also the context of American imperialism and it’s harmful military interventions. What was your thinking behind zooming out, giving viewers higher level context for why people are displaced in the first place and ended up in Seadrift?

I’m glad the approach resonated, and yes, nothing happens in a vacuum! I’ve always thought of Seadrift as a sequel of sorts to the many mainstream films and programs about the Vietnam War, which often ends with the Fall of Saigon. The experiences of Vietnamese refugees, if not completely erased, appears as an afterthought, and are either helpless victims to be rescued or celebrated for their successful integration and economic achievements, and I wanted to broaden and complicate that portrayal. In earlier cuts of the film, the story began at the Fall of Saigon and our Vietnamese protagonists’ escape from their homeland, but after discussions with colleagues and advisors, we recognized that the story began earlier, and added Bằng Nguyễn’s family’s first refugee migration from North to South Vietnam, as well as an episode from his childhood growing up in a time of war. These experiences are crucial to understanding Bằng and what happens later in the film.  It was important to me to tell this story through personal narratives, and not utilize an omniscient narrator or interviews from academics, so context was largely given through snippets of archival material, as well as personal reflections of people such as the Vietnam Veteran who admitted it was difficult seeing a Vietnamese person walking down the street in his hometown.

The documentary has a lot of revealing interviews from the present time and it’s also very rich with archival footage of the Seadrift community during the 70’s/80’s. It’s always heartening to see footage of Vietnamese outside the physical context of a war-torn country from that period, to see them trying to make a life in a new place. I’m curious how you obtained the archival footage of the everyday lives of the resettled Vietnamese in Seadrift? In your research, did you find any old footage that was interesting or compelling but didn’t fit into the narrative of the film?

Archival footage of the Vietnamese community came mainly from news reports, but a few shots were from the short documentary “Vietnam in Texas” by Mark Brice, a student at Rice University at the time. Footage of the Seadrift town hall meeting, which plays a pivotal role in this story, also came from Mark’s film.  Beyond those sources, I found very little “home video” footage or photos of Vietnamese fishing communities from that time period, so I feel very fortunate there was enough material to give viewers a sense of that particular time and place.

The coastal town and physical setting of Seadrift is a character in and of itself within the film because it’s the waters of Seadrift that offers a livelihood to the people who live and work there, and it has its own conditions for survival (like the effects of overfishing). There was a really powerful moment where Bang, one of the Vietnamese fisherman, is recounting how a white Seadrift fisherman had been harassing the Vietnamese to leave town and Bang says—with a Vietnamese and American South accent—”Believe me, I’d tell him, ‘Fuck you, I ain’t move nowhere.’ That’s not his house, that’s not his water.” There’s this claiming that the open waters are for everyone and no one could push him out of that place. What was it like physically filming in Seadrift? On the ships with the fisherman? Did you get a sense that it made sense that Vietnamese refugees were pulled to make a life there and continue to raise families there?

That’s perhaps my favorite line in the film, a moment of unapologetically claiming our place in America and pushing back against injustice, something we don’t see nearly enough in portrayals of Asian Americans or refugees. Before this project, I had never witnessed commercial fishing up close, and wow, it is difficult work that requires hours of repetitive, back-breaking labor. In fact, more often than not, the boat captain would decide to cut their day short, not because they had finished their work for the day, but because of how tired the film crew was. But there’s also an undeniable beauty that surrounds you in the bayous and open waters, and such craft and artistry in the work, that it was easy to see why all the fisherfolk I spoke to expressed a deep affinity to the water and hold immense pride in their ability to make a living on it. In Seadrift, this industry provided one of few available opportunities for newly arrived Vietnamese refugees to make a living, and although it has been in decline for decades, a number of Vietnamese crabbers continue to make a living on the waters there, and the crab plant, now owned by a Vietnamese American family, remains in operation. The majority of second generation Vietnamese Americans who grew up there have moved to larger cities to pursue a myriad of professions, but many regularly return to Seadrift for family gatherings and special celebrations. This small town on the Texas coast had become, and continues to be, what they call home.

Tim Tsai is a Taiwanese American filmmaker whose past work includes directing a short doc series on early Chinese Texans for Austin PBS, and editing the “pure cinema” film YAKONA (SXSW ’14) about the San Marcos River. He holds an MFA in film production from UT Austin, and is a Firelight Media Documentary Labs alum. “Seadrift” is his feature directorial debut.

Qui Nguyen, ‘Raya and the Last Dragon,’ and a Southeast Asian Moment

For me, it was also letting me be able to give my personal touch, as a Vietnamese American, who desperately wanted to see a hero like this for my kids.
Read more
Film

Hong Khaou’s new film Monsoon is a poetic, and at times, frustrating ballad that tells the story of a life in-between, coloured by multiple homes, identities and stories left untold.
Read more