Hong Khaou’s new film Monsoon is a poetic, and at times, frustrating ballad that tells the story of a life in-between, coloured by multiple homes, identities and stories left untold. We journey into Saigon alongside Kit, a young British Vietnamese man played by Henry Golding. Kit travels to Vietnam, a home that doesn’t feel like home, to return his parents’ ashes to the country that they fled. Khaou uses Kit’s navigation of his former home to lead the viewer into the confusion, longing and love of multiracialism and immigration. Through Kit, we experience Vietnam in staccato spaces: neither as a tourist nor a local, but someone positioned awkwardly and familiarly in the grey space. What Monsoon does most powerfully is take that grey space and drench it in the sumptuous sounds, visuals, and uncertainty of Vietnam’s rainy season, without giving the viewer the actual catharsis of rain.

Before I began watching Monsoon, I had mixed feelings: I was excited to see a film by a British Asian director, but was frustrated that the story of a queer British Vietnamese man had a straight British Malaysian actor playing the lead. I was also disappointed that a contemporary film centering Vietnam could not do so without centering the war.

However, after watching the film, I began to soften into the melody of Monsoon and the histories that haunt us. Monsoon is loosely based on Khaou’s own immigrant experience. Born in Cambodia in 1975 to Chinese Cambodian parents, Khaou and his family fled to Vietnam when the Khmer Rouge took hold of Phnom Penh. After living in Vietnam for eight years, the family emigrated to London. Khaou, Kit, and Golding, then, all have a shared experience of not quite belonging; of being multiracial Asian men born in one country, yet living in another.

When I followed the film’s coming of age, it made sense that Khaou’s deeply personal film was initially written with a British Cambodian lead. As the story grew into the Monsoon we now see on our screens, Kit morphed into a British Vietnamese man. The cinematic complexity of defining Kit’s ethnicity fits with the individual complexity faced by Khaou. Watching Khaou in an interview, I was struck by his simultaneous clarity and fragility, and came to appreciate the way Golding took on that fragility and made it his own. Throughout the film, Golding shows us that his lived experience as a non-Vietnamese, multiracial Asian man enables him to approach Kit’s character with all of the frustrations and uncertainty that many first and second generation diasporic Vietnamese have felt returning to Vietnam. Seeing Golding appear without the polish and pizazz of productions like Jon M. Chu’s Crazy Rich Asians, or Guy Ritchie’s The Gentlemen, I wondered if, ironically, a film where Golding played a British Vietnamese man was perhaps the closest he had come to playing himself.

While Kit grapples with home and identity throughout the film, his queerness is comfortable and unquestioned. We see Kit develop a relationship with Lewis, a Black American clothes designer played by Parker Sawyers. The relationship is at times both casual and complex, tender and uncomfortable. Lewis feels at ease in Saigon, explaining that he is there to oversee the production of his new fashion line while also investing in the local economy. He feels so at home in Vietnam that he often educates Kit about the country, telling him what to expect of cities like Hanoi with a confidence that marks him out as an expat. Lewis is also the son of American veterans grappling with the way the war fragmented his family. The way that Lewis tries to conflate his experience of the war with Kit’s is uncomfortable at best, infuriating at worst. In a poignant conversation between the two, Lewis says, “It took a great deal out of us too. A generation forgotten, a country divided. It’s not a war we can recall with pride.” Kit responds, “Why would you want to recall it with pride?” Lewis gives no answer. 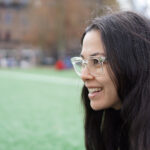 Jess is a Vietnamese Jewish Londoner who lives, writes, curates and parents on the traditional territory of Coast Salish peoples. Jess is recovering from White feminism and learning to soften, love, parent and make home/community with pride. She celebrates her identity as a multiracial mother, daughter, wife, sister and friend, whilst questioning it and committing to continuous un/learning.

Jess is deeply committed to creating art and activism that will nourish and nurture those in the past, present and future. She uses a combination of writing, editing, poetry, cultural curation and oral history to record people’s experiences, traditions and hopes, so that we might use these individual milestones as a collective compass for the future.

Jess edits the diaCRITICS series, this is for mẹ, and is currently building out a new podcast and platform called Asian Motherhood. You can follow her on IG, or find her drinking fish sauce.