December dragged its slow funeral into the father’s

through the family’s tunnels of hearts. The grandfather

breathing. Around them, treetops all worn bare with

over-rented apartments. This family was real despite everything

else. The mother clenched the son’s palms, his eyes towards

the paper sky where geese were writing letters. In the rearview

mirror, the father looked at the grandfather slouching in

the backseat. His unworded eyes, something like the shade of

the son’s imagined first snow. Its too-soon act of melting. 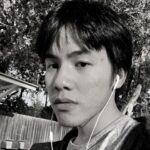 Duy Quang Mai is from Hanoi, Vietnam and is currently studying in Sydney, Australia. His poetry has been published or is forthcoming from The American Poetry Review, Overland, The Lifted Brow, Cordite and others. He is the author of the chapbook Journals to (Story Factory, 2019).