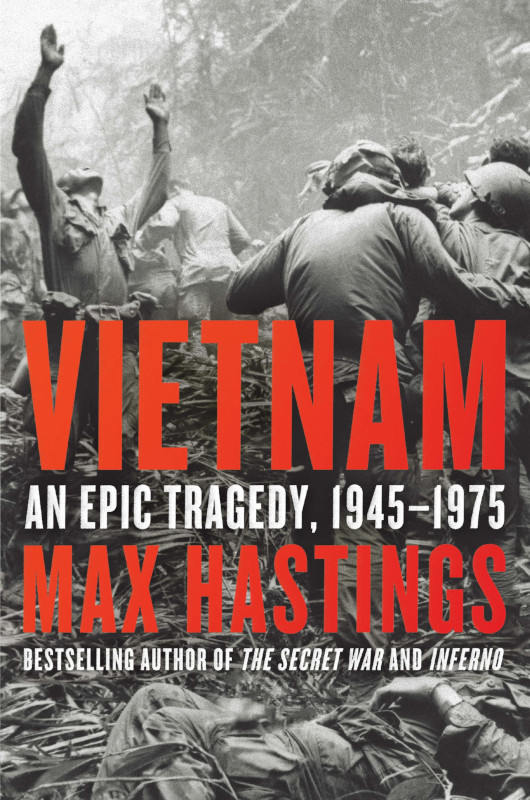 As a progeny of the Republic of South Vietnam (“RVN”) and, admittedly, a biased historical side-gawker, I found Max Hastings’s Vietnam: An Epic Tragedy, 1945-1975, to be a compelling but extremely difficult book to read. This is because Vietnam is Hastings’ promise to tell stories straight from the trenches: “Within the big canvas, many individuals…behaved decently. I have sought to tell stories of such people, because it is mistaken to allow virtuous endeavor to vanish into the cauldron of bomb blasts, brutalities, and betrayals from which most accounts of the war are served up.”

Touted as a soldier’s book for soldiers, Vietnam delivers strong military storytelling with narratives focused at the grassroots level while also bringing the stories of people at ground zero from all sides of the Vietnam conflict to light in all of its grueling, limb-wrenching, and heart-breaking detail. Using Vietnamese sources, Hastings brings the tales of Southern paratroopers, village elders, young ideological students, struggling farmers, Việt Cộng guerrillas, Sài Gòn bar girls, and even those Vietnamese (“an elderly peasant”) who were less moved by ideology and more by survival. The single strongest element in Vietnam is Hastings’ battlefield centric story-telling which relays the experiences of soldiers, French, American, NVA, and RVN in a harrowing and gripping play-by-play that brings the front lines into the readers’ hands. The suffering of civilians and soldiers alike are vividly and traumatically retold, humanizing the faces and voices of those who lived through, died in, and survived the Vietnam War.

The rigorous detail of his brush strokes is evidence of his in-depth research. As noted in his Introduction, Hastings “spent many hours studying” the testimony of soldiers, “conducted almost a hundred interviews with survivors of all ages and both sexes, American and Vietnamese,” and read many thousands of pages of translated Vietnamese memoirs, histories, and contemporary documents.”

The catch? You have to endure the constant drilling of Hastings’ theme. That is, Vietnam’s ground zero stories, which are built on a steady stream of first person narratives, all serve to support Hastings’ theories that (1) Vietnam was a debacle, (2) everyone in leadership was basically an asshole, (3) front line soldiers of all the parties involved fought valiantly, most of the time, unless they were in the Army of the Republic of (South) Vietnamese (“ARVN”), in which they fought well just sometimes, and (4) those that suffered the most, and still suffer, were those caught in the middle of ineffectual, stammering political and military players. For Vietnamese soldiers of both sides, they suffered the fate of ideologues who dictated their actions without a care for them, fighting in a starvation, endless crisis state. For Vietnamese not in the battlefield, they maneuvered an overall impossible scenario defined by a complicated religious, political, social, and economic quagmire that Hastings, at times illustrated to great detail, and at other times, were hazy, neither detailed nor cited enough (or at all).

And oh, no one involved in this conflict, but especially the Vietnamese of either side, “deserved” to win.

In fact, Hastings’ theme of the corrupt, unworthy RVN government and the ineffectual self-serving American political military machine felt so drilled into Vietnam that every quote, testimony, and story seem to have been selected to support at the expense of considering any other perspective.

It was painful to read yet again about the corruption that plagued the RVN, whose political and military leaders Hastings characterizes as dependent upon Americans and either disconnected from or desensitized to the well-being of their people. This is a clear indication that, although the depth of his work into personal narratives is unquestionable, Hastings was negligently incomplete in his historical research and analysis, ignoring a growing body of scholarship that points to the efforts of the people of South Việt Nam to build a country in the midst of unending crisis and a promised illusory false “peace” that never came. (See Giving Voice to the Dream of Nation Building in Vietnam”). This makes Vietnam another book that contributes to denying the agency of RVN while giving said agency aplenty to the Conmunist (“NVA”) (albeit to a one-dimensional negative end).

To his credit, Vietnam was especially critical of the NVA, recounting atrocities, murders, assassinations, and terror tactics. Valuable too were the accounts by former Communists who shared their views about the corruption and cruelty of the NVA. In short, Communist leaders did not escape, as they have in some revisionist histories, the same flat characterizations Hastings levied against RVN. That is, Uncle Ho approved and advocated for “systemic cruelties” against his adversaries and in the end winning the war “cost North Vietnam around ten thousand dead, few enough when heated atop the mountain of his people’s corpses that Le Duan had already climbed to secure Vietnam’s reunification.”

Finally, although Vietnam is more Vietnam-centric than past Vietnam books penned by westerners, it still falls short in that Vietnamese voices are only a heavy mist alongside a torrent of stories that center American voices. I was happy with the fair amount of Vietnamese perspectives, heavy on the NVA experiences, that I got, but I felt like I spent more time learning about the experiences of the American military than about Vietnamese.

A review of Hastings’ bibliography shows that he relied on approximately 26 books by communist authors, many of which were published in Vietnam. Four of Hastings’ books were by former Communists or Communists in exile and 20 of his books were by South Vietnamese authors. Despite claiming to bring us the stories of the “people,” he excluded many well known books by South Vietnamese authors including:

Phục, the celebrated Vietnamese correspondents, to find impassioned words from the point of view of committed South Vietnamese. Their memoir, written in Vietnamese and translated into English, should have been available to Hastings at the time. Furthermore, Nguyễn Công Luận’s memoir, Nationalist in the Việt Nam Wars, which was listed in Hastings bibliography is the epitome of passion, but only lightly cited.

In short, Hastings’ claim that the public would be hard pressed to find memoirs by South Vietnamese that were as compelling as Communist, Dr. Đặng Thùy Trâm’s diary, Last Night I Dreamed of Peace is incredibly insensitive. What about the works of Vietnamese poet and dissident, Nguyễn Chí Thiện, who spent 27 years in Communist prisons for his activism and for composing politically irreverent poems? Or the dozens of Vietnamese memoirs on the “Gulag” that were the Vietnamese “re-education” camps? There are also several dozens memoirs that speak about the deplorable living conditions in Vietnam, especially for South Vietnamese, after the war. None of these are listed among Hastings’ researched books.

Hastings’ own observation is apropo: “Liberal America has adopted an almost masochistic attitude which has distorted the historiography as surely as do jingoistic works by conservative revisionists.” My question is, to what extent does Vietnam also add to this “distorted” historiography by framing his stories to point to a central argument that demonizes all of the players and once again, fails to give South Vietnam the agency it deserves.

Z.M. Quỳnh is currently working on a novel that highlights the experiences of ARVN soldiers. You can visit her at zmquynh.com.