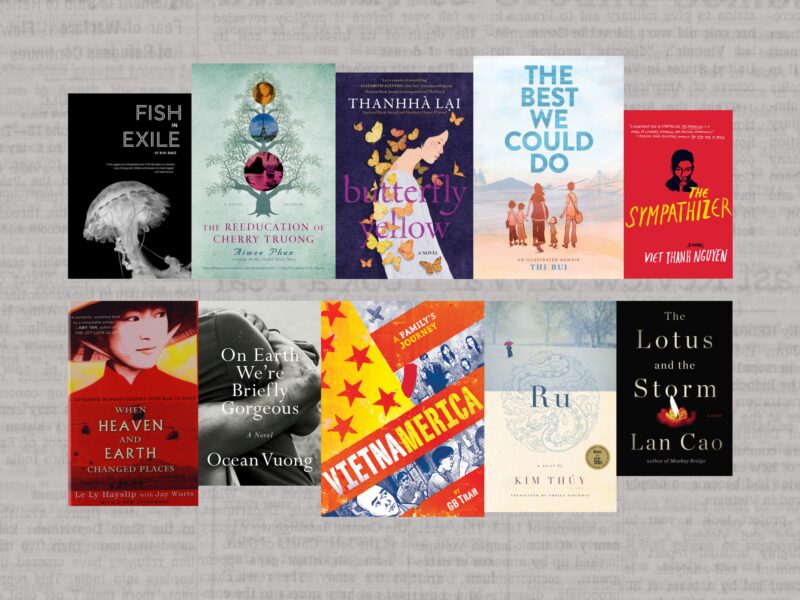 That war, over 45 years ago, has been and continues to be a fixture in Vietnamese diasporic writing. From Le Ly Hayslip’s When Heaven and Earth Changed Places, a memoir about a Vietnamese woman’s life before, during, and after the war that was later adapted into a 1993 mainstream film, onto other acclaimed works that have arisen in the last five years – Viet Thanh Nguyen’s historical novel The Sympathizer and Ocean Vuong’s poetry collection, Night Sky with Exit Wounds – war and its legacy seldom linger far from the psyche, cutting across borders and generations. Tales are found on the diaspora in France in Aimee Phan’s debut fiction The Reeducation of Cherrie Truong and, in Canada, Kim Thuy’s Ru, hailed as the first Vietnamese Canadian novel. In a 2016 Q&A between writers Andrew Lam, Viet Thanh Nguyen, and Aimee Phan, Nguyen recognised that although some younger diasporic writers were writing about different subjects, others still wrote about the war and its legacy but in different forms. The graphic novel has been such, with GB Tran and Thi Bui illustrating the stories of their families’ plight, and through verse with Thanhha Lai in her coming-of-age tale of a young refugee girl. It is almost instinct to reach for the war as a subject of reflection, not for lack of imagination, but because it has indelibly informed how we, as the diaspora, move in the world.

Prominent themes from diasporic Vietnamese writing articulate the experiences and hardships of resettling and adapting to a new country. Sometimes mistaken merely as an immigrant story, much of it is distinctly a refugee story, in its nostalgic meanders into the past, whether through flashbacks or evoked memories, and the marked, enduring loss that manifests in the chasm between past and present, where characters often find themselves imprisoned. Loss takes many forms: not just of loved ones who stayed behind, were separated, or were killed, but a loss of a country, a way of life, down to loss of familiarity and certainty. Lan Cao’s The Lotus and the Storm is one that interlaces these themes in its story about an aging father and adult daughter living in an east coast US suburb forty years after the war. Through father and daughter, Minh and Mai, Cao decodes what such a magnitude of loss does: the blurring of past and present, serious mental and emotional disturbances, chronic despair and isolation. But a succinct description for all this is the now ubiquitous trauma.

In Ocean Vuong’s debut novel, On Earth We’re Briefly Gorgeous, trauma underlies the coming-of-age tale exploring masculinity and sexuality from the narrator, Little Dog. Vuong belongs to the later wave of migration from Vietnam, arriving in the nineties, well after the ‘boat people’. Like the writings of older diasporic writers, the themes are very similar, muddling immigrant and refugee experiences. This is because Little Dog’s family, too, were affected by the war and they continue to hurt from it – his mother suffers from post-traumatic stress disorder (PTSD) and his grandmother suffers from schizophrenia, aggravated by – and perhaps surfacing from – familial rejection and stigmatising poverty. Whereas others managed to escape shortly after, out of grave concern for their and their family’s safety, others were sent to re-education camps and new economic zones where disease, injury, and death were rife. But even the escape was no guarantee of sanctuary as many of the 800,000 that fled in ill-equipped boats to neighbouring refugee camps died during the journey, whether by fatigue, storms and the sea, or by pirates. Vuong, born after the war, absorbed his family’s inarticulate trauma and carried it inside him.

And that is what trauma is: what hurts the most is the thing least expressed coherently.

The novel’s experimental form suggests the inability to express, in linear logic, one’s life story. Violence and the disturbing come in dregs, fleetingly mentioned then vanishing swiftly like spectres. Trauma has a way of silencing and severing, and this is seen in those suffering from PTSD, whereby the memories trap themselves within the self, preventing the person from moving forward. Trauma takes new forms so that others are unable to trace the origins of unsettling behaviour. Vi Khi Nao’s Fish in Exile could be interpreted as such. A meditation on grief centred on parents mourning the death of their twin children, it has nothing to do with the war and its legacy, yet that loss and the way she attempts to give form to it have a similar texture to the kind described in diasporic writing centred around war. And that is what trauma is: what hurts the most is the thing least expressed coherently.

It happened long ago, someone can say, it doesn’t matter anymore. If that is true, that traumas like these matter little, collectively we – as a culture at large, outside of the diaspora – would be well-balanced. There is strong evidence to show traumas from violence are passed from one generation to the next, and can materialise as poor mental health, even violence itself, where victim can become perpetrator. Trauma permeates. Vietnamese diasporic writing is heavy with undertones of trauma, but the body of writing needs not to be concluded as a communal sad story.

Said writing is a record of where the diaspora has been, and a prospect to grow and learn from our histories. These narratives are able to galvanise our better selves, tending to qualities that might have been dormant or in need of care – empathy, patience, generosity. They recognise viewpoints that seldom appear in wider understandings, providing a balm to the enduring ache from undervalued truths. By providing scope for these narratives is to acknowledge and in turn heal. In Vietnamese diasporic writing I recognise myself, embarrassed that war and its legacy are the first to come to mind when thinking of the personal, but patient because these have, and will continue, to inform that personal.

Laura Bui lived in California and Washington before moving to England where she now teaches and researches criminology at the University of Manchester. Her narrative non-fiction is forthcoming in Test Signal, an anthology of the best contemporary writing from Northern England.