Diasporic Vietnamese Artists Network
Out of the MarginsPoetry

heartbreak and jail cells
the jack and rose to my American dream
________that’s right, speak in metaphors i can understand
bony bodies, a pinch of salt
hide the jewelry in the baby’s diaper
hope the soldier doesn’t check
it’s like Nazi Germany, see
________no, it’s not
no, it’s not
we should never have gotten involved in that war
________we the people of the united states
that’s what i argued in my history class
________in order to form a more perfect union
i was assigned to the Nixon table to
________establish justice
challenge the world that
my family fought for
________the blessings of liberty, our posterity

who am i to do that, tell me
who are you to ask that of me

they used to recount stories but
just when i became old enough
they stopped i don’t know why
and now i ask i ask i
feel i am prying into a past that is not mine
what happens next, my little hollywood movie
________exposition, climax, resolution
i hate that i love to hear
_______the story of survival, a New York Times
________Bestselling Novel
about their sufferings
as if they were my own stories 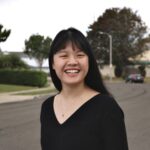 Kaitlan Bui is studying English and East Asian Studies at Brown University. She writes for two university publications, Cornerstone and Post- Magazine, and she hopes to continue writing for a very long time. Kaitlan is currently working on a book based on the life of her great aunt, who was born in Vietnam in the 1930s.

Out of the Margins

as pretty as hanabi

Q: WHAT DOES IT MEAN TO BE A VIETNAMESE AMERICAN WRITER?
Read more
Out of the Margins

Which Asian woman do you/blame for your choices now?
Read more
Out of the Margins

i could have been a painter.//she tells me, proud./but i chose freedom.
Read more