On Anti-Asian Violence, and Collective Life 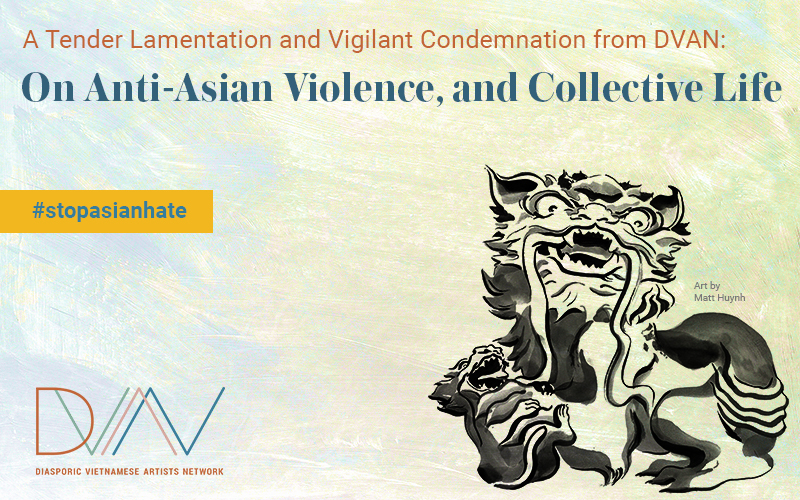 A tender lamentation and vigilant condemnation, this statement is one of many during the recent outpouring of support, solidarity, and sustenance in light of the anti-Asian shootings in Georgia this past week. We underscore the ongoing labor and love of Asian organizers who have been doing, and will continue to do, the intersectional work of grassroots mobilization, mutual aid, and transformative justice to take care of our communities. During times of crisis, a statement can function as a compulsory genre of performative politics, individually taking up too much space and time, and leaving too little room for proper grieving, contemplation, and collective action. In situating this statement in a constellation of community care, prioritizing the desires of the victims and their families, we orient this statement as part of a collective movement not only to end violence against Asian women but also to build life-giving conditions grounded in Ethnic Studies.

The Diasporic Vietnamese Artists Network (DVAN) sends love to the eight victims of the shooting in Georgia as well as their families. On March 16, 2021, a white supremacist targeted and shot six Asian women across three massage parlors and spas. This display of racialized, gendered, and sexualized violence is no anomaly; rather, it is inextricably tied to the 150% uptick in anti-Asian attacks throughout COVID-19 (frequently referred to as the “China virus” or “kung flu” by GOP officials). In fact, 68% of the 3800 reported Anti-Asian racial incidents were from women. Furthermore, these physical attacks work in tandem with the so-called “soft” violence that Asian communities have endured throughout the pandemic, as Asian American women have fronted the highest jobless rates during these past six months and Asian-owned shops have been forced to shut down. Therefore, DVAN deplores current, majority media outlets and police statements which have flattened and depoliticized the murders as an irregular result of a “bad day” of a non-racist man who simply had a “sex addiction.” The killing of six Asian American women at their workplaces and the mainstream refusal to recognize its racial motivation, or even spell and pronounce their names properly, is a reflection of an ideology that does not count Asian Americans as people impacted by racism.

The salient anti-Asian sentiments over the past year of the pandemic, however, are neither incidental nor novel. Rather, the murder of the eight victims and other anti-Asian attacks are part and parcel of the longue durée of U.S. deep-seated processes and powers that require the constant Orientalization and exploitation of the Asian laborer, migrant, immigrant, refugee, and model minority. The entwined axes of racism and sexism are observable since 19th century U.S. policy which simultaneously hypersexualized and pathologized the Asian laborer. In 1875, the Page Act was introduced to “end the danger of cheap Chinese labor and immoral Chinese women,” who were stereotyped in U.S. law and culture as tainted prostitutes. Likewise, these gender and racial politics extended to Chinese men, too, with the Chinese Exclusion Act of 1882, which prompted the harassment, assault, and expulsion of immigrants who were classified as feminine, filthy, and therefore unassimilable. The fetishistic extraction of Asian people, particularly women, became not only an issue of economic labor and social aberrance, but also a weapon of U.S. empire as the nation state oversaw sex trades across hundreds of overseas military bases throughout Asia. Across centuries, the migrant Asian woman remains as the foundational figure of continued sexual exploitation and anti-immigration U.S. law through a prolific sex industry driven by trafficking and the delivery of “mail-order” brides.

Such violence, as evident in the shootings from this past week, is not a vestige of the past but is an ongoing material present. As Sunny Woan writes in White Sexual Imperialism, “The history of Western imperialism in Asia and its lingering effects present the greatest source of inequality for diasporic Asian women today.” Racial violence, furthermore, does not only take shape as isolated hate crimes, but manifests on an everyday scale where Asian women are “being treated as disposable” while “working night and day” and “caring for children and elders” with their “low-wage insecure jobs.”

The DVAN community is not protected from such racist and misogynist ideology, neither. During a writers residency in France, Vietnamese American women artists from the collective She Who Has No Master(s) were mistaken for sex workers at the airport and objectified as “Thai girls” while walking near the Seine River before a reading. Our women leaders have been inappropriately approached by white American donors in the United States, too.

More largely, the Vietnamese American community has deep stakes in recent events, as we are also embedded in a history of gendered and racialized violence. Throughout the Vietnam War, G.I. soldiers engaged in often fatal wartime sex crimes, including during the My Lai Massacre. In the post-war 1980s, Vietnamese fishermen boats were destroyed by KKK members in the Texas Gulf Coast, followed by the killing of five Southeast Asian refugee school children in Stockton, California. In 1996, Thien Minh Ly was stabbed more than a dozen times by two white supremacists who identified as neo-Nazis; likewise, in 2003, Bich Cau Thi was shot by a white police officer in front of her family during a mental health check. Closer to the present, in 2019, thirty-nine Vietnamese victims died as part of a human trafficking ring. Most recently, on March 15, 2021, U.S. Immigration and Customs Enforcement (ICE) deported thirty-three Vietnamese refugees despite a 2008 memorandum of understanding which shielded the removal of all Vietnamese immigrants who arrived before 1995, as well as the current administration’s 100-day deportation moratorium. U.S. law, history shows us, is not neutral but reflects a culture built upon contradictions designed to preserve white privileges.

Life persists most abundantly when we stand together. We will thus continue grieving, organizing, and remembering.