This third installation of ÁCCENTEDiRL will center diasporic writers’ memories and reflections of April 30th, 1975, the liminality of refugees, and postmemories. Grab a drink and join groundbreaking authors Lan Cao, Duong Van Mai Elliott, Le Ly Hayslip, and Marcelino Truong as we transcend and travel through time to that fateful day. 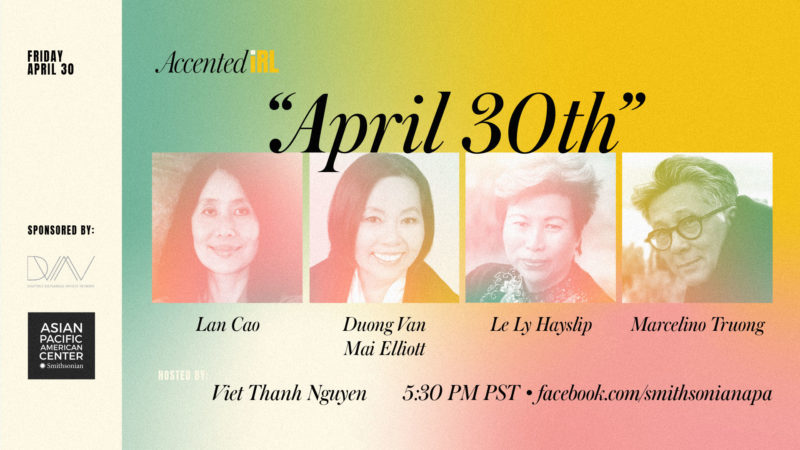 Lan Cao was born in Saigon, Vietnam, in the middle of a war that devastated all Vietnamese in both parts of Vietnam. Amidst this violence, Lan found solace in books. Her love of reading and writing began early in her childhood when her parents gave her a copy of 1001 Arabian Nights. She was fascinated by the story about a woman who saved her own life and her sister’s life by telling stories, their fate hanging on the fabulous words that make up each story’s thread.

In 1975 when South Vietnam was defeated, Lan was adopted by an American officer, a close family friend, and sent off to live with his family in Connecticut. When her parents arrived in the United States several months later, she moved to Virginia to be with them, starting high school as a freshman in 1975. There was no war in Virginia, but there was loneliness and hostility when a great deluge of Vietnamese refugees entered the state.

After graduating from Yale Law School, she clerked for the legendary Judge Constance Baker Motley, an icon in the civil rights movement who won 9 out of 10 cases challenging Jim Crow laws that she argued before the U.S. Supreme Court. After her clerkship, while working at a major Wall Street law firm, Lan wrote a critically acclaimed novel, Monkey Bridge, published by Viking. Michiko Kakutani of The New York Times wrote this of Monkey Bridge, “Cao has not only made an impressive debut, but joined authors such as Salman Rushdie and Bharati Mukherjee in mapping the state of exile and its elusive geographies of loss and hope.”

She is also the author of The Lotus and the Storm, published in 2015 by Viking and co-author of Family in Six Tones: A Refugee Mother, an American Daughter, also published by Viking in 2020.

Duong Van Mai Elliot is the author of The Sacred Willow: Four Generations in the Life of a Vietnamese Family, a personal and family memoir which was nominated for the Pulitzer Prize. Her second book, RAND in Southeast Asia: A History of the Vietnam War Era, chronicles this think tank’s involvement in research about the Vietnam War at the behest of policy makers in Washington D. C. and the impact of this involvement on RAND itself.

Mai Elliott served as an advisor to Ken Burns for his documentary on “The Vietnam War,” which aired on PBS in September 2017, and featured in seven of the ten episodes of the film. She is a frequent speaker and writer on Vietnam. She recently contributed a chapter for a Cambridge University Press 3-volume work on the Vietnam War, and has completed a novel on Vietnam in the early 1960s. Mai Elliott was born in Vietnam and grew up in Hanoi and Saigon. She attended French schools in Vietnam and is a graduate of Georgetown University in Washington D.C. (She also writes under the name of Duong Van Mai Elliott).

Marcelino Truong was born in Manila in 1957, the son of a Vietnamese diplomat and of a French artistic mother. He studied Public Law at Sc Po Paris and English literature at the Sorbonne before becoming a self-taught illustrator, painter, and comic art author. His illustrations are seen on book covers, in picture books for young readers, in the French press, and in art galleries. His re-discovery of Vietnam North and South in 1991, a country he had left in 1963 at the beginning of the war, led to a near obsessive production of sketches and drawings, of temperas and oil-paintings, all about Vietnam and its people.

Truong’s latest opus is a two-volume autobiographical graphic novel retelling the story of the Vietnam war, as observed by Franco-Vietnamese child living in Saigon and London who processes the politics of the era from the point of view of the son of a Republic of Vietnam diplomat, sensitive to the plight of his country. Such a Lovely Little War – Saigon 1961-63 attracted much acclaim and its follow-up Saigon Calling – London 1963-71 is counted by the British daily The Guardian as one of the best graphic novels of 2017.

Truong is currently working on a fictional graphic novel set at the end of the Indochina war (1945-54), as witnessed by a young Vietnamese painter serving as a propaganda artist in Ho Chi Minh’s People’s Army. This book is to be published in French September 2021 by Denoël Graphic, Paris, Under the title Quarante hommes et douze fusils (40 Personnel And 12 Guns).

Viet Thanh Nguyen is the author of The Sympathizer, Nothing Ever Dies: Vietnam and the Memory of War, The Refugees, and Race and Resistance: Literature, Politics and Asian America. His most recent book was Chicken of the Sea, written with his son Ellison. His next book is The Committed, the sequel to The Sympathizer.

Philip Nguyen is the producer of ÁCCENTED: Dialogues in Diaspora presented by the Diasporic Vietnamese Artists Network (DVAN). He teaches Asian American Studies in the College of Ethnic Studies at San Francisco State University and is the Community Organizing Manager for the Vietnamese American Roundtable, a 501(c)(3) nonprofit organization based in San Jose, California. Philip serves as the President of the Union of North American Vietnamese Student Associations (UNAVSA) and as the Co-Chair of the Young Vietnamese Americans (YVA) Committee for PIVOT – The Progressive Vietnamese American Organization

Eastwind Books of Berkeley is our partner for all book sales and shipping, and books from featured authors will be available on https://asiabookcenter.com for a discounted price.