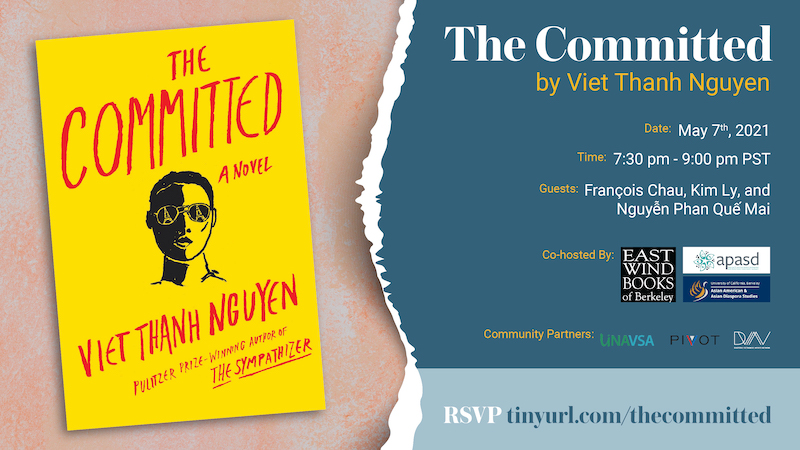 
In celebration of Asian Pacific American Heritage and History Month, Eastwind Books of Berkeley, the Asian American and Asian Diaspora Studies (AAADS) and the Asian Pacific American Student Development (APASD) programs at the University of California, Berkeley welcome Pulitzer-prize winning author Viet Thanh Nguyen in a virtual conversation that will feature Nguyễn Phan Quế Mai, François Chau, and Kim Ly on his latest book The Committed, the highly anticipated sequel to The Sympathizer. The program will also include a special The Committed-inspired cooking demonstration by Chef Tu David Phu, custom-curated cocktails by mixologist @mixaphoria, and music by DJ Pu22l3.

This event is free and will be live-streamed to Facebook and YouTube. We are grateful for our partner community organizations for their support: 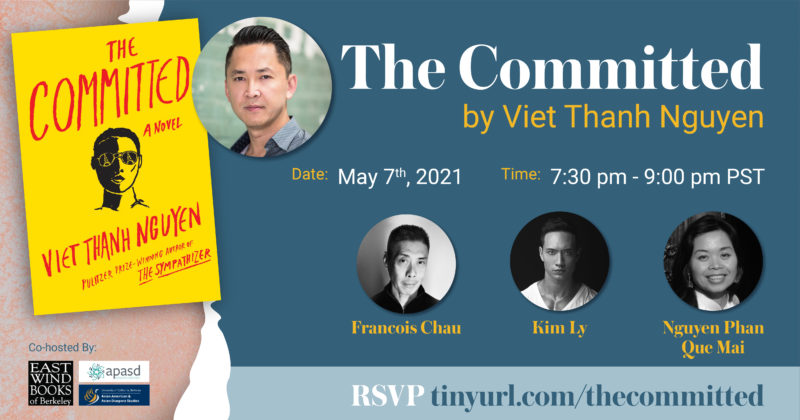 Viet Thanh Nguyen is the author of The Sympathizer, Nothing Ever Dies: Vietnam and the Memory of War, The Refugees, and Race and Resistance: Literature, Politics and Asian America. His most recent book was Chicken of the Sea, a children’s book written in collaboration with his son Ellison. His most recent book is The Committed. He is a University Professor, the Aerol Arnold Chair of English, and a Professor of English, American Studies and Ethnicity, and Comparative Literature at the University of Southern California. Most recently he has been the recipient of fellowships from the Guggenheim and MacArthur Foundations, and le Prix du meilleur livre étranger (Best Foreign Book in France), for The Sympathizer.

François Chau is an Asian-American actor. Born in Phnom, Penh, he is half Cambodian and half Vietnamese. He has been a professional actor for over 35 years with over 150 credits in film, television, and stage. He is best known for his roles in Lost, The Expanse, and  Teenage Mutant Ninja Turtles 2. He is very pleased to have been the narrator for both of Viet Thanh Nguyen’s books, The Sympathizer and The Committed.

Kim Ly was born 1983 in Stockholm, Sweden to a Vietnamese father and a Swedish mother. After graduating from the university of Stockholm with a masters degree in marketing, he decided to pursue a career in modeling and film. In 2014 he got an opportunity to star in the Vietnamese action film Hương Ga. The film was well received and Kim has since then resided in Saigon. In 2017, he produced and starred in the Action/Comedy Saigon Bodyguards. The film became a big hit and The Russo Brothers (Marvel films) acquired the rights for the remake in 2020. Kim Ly has continued working as a brand ambassador for numerous high end brands as well as humanitarian work with Newborns Vietnam, Heartbeat Vietnam and UN Women. He is currently working on the film/tv adaptation of The Sympathizer by Viet Thanh Nguyen.

Dr. Nguyễn Phan Quế Mai is an award-winning writer in both Vietnamese and English. Her eight books of poetry, short fiction and non-fiction in Vietnamese have received the Poetry of the Year 2010 Award from the Hanoi Writers Association, the Capital’s Literature & Arts Award, and First Prize in the Poetry Competition celebrating 1,000 Years of Hanoi. Her debut novel and first book in English, The Mountains Sing, is an International Bestseller, a New York Times Editors’ Choice Selection, Winner of the 2020 BookBrowse Best Debut Award, Winner of the Blogger’s Book Prize 2021, and Winner of the 2020 Lannan Literary Award Fellowship for “a work of exceptional quality” and for “contribution to peace and reconciliation”. Quế Mai is an editor of DVAN’s publishing series with Kaya Press and Texas Tech University Press. She has a PhD in Creative Writing with Lancaster University. Her writing has been translated and published in more than fifteen countries. She has just been named by Forbes Vietnam as one of 20 inspiring Vietnamese women of 2021.

Since 1982, Eastwind Books of Berkeley has been a major source for Asian American literature, Asian Studies, Ethnic Studies, Language Learning, Traditional Chinese Medicine and Martial Arts books. We support and promote various authors at our book events and have been involved in the publication of select titles. For more information, please visit asiabookcenter.com

The Asian American and Asian Diaspora Studies (AAADS) Program at the University of California, Berkeley is dedicated to the interdisciplinary study of historical and contemporary experiences of Asian-ancestry groups in local, national, and global contexts. Through research, teaching, student mentorship, and community engagement, AAADS aims to advance Asian American political, economic and social concerns, while being attentive and responsive to issues of transnationality and diaspora, and the shifting geopolitical, economic and sociocultural forces of globalization and their impact on Asian American communities.