There’s a scene in The Sound of Music, where Julie Andrews gazes into the future on a stormy night and envisions something holy: play clothes. She wraps herself in her bedroom curtains, a stuffy cream and sage brocade. Play clothes, she seems to resolve, that’s what the Von Trapp children need, their austere father just having interrupted their song and dance.

I come from a Von Trapp-esque clan, which is to say, my father is the oldest of eight musical, variously talented siblings. The second oldest brother, my Uncle Minh, was a kung fu champion, and sometime in 1984 or 1985, he gave lessons to his three little brothers—Ace, Francois, and Tom—in the backyard. My grandmother made them special pants for the lessons. They’re red as tomatoes and look loose enough for the boys, then between 11 and 13 years old, to squat and strike and kick butt.

Uncle Francois told me that around that time, my grandmother used the same fabric to make all my aunts and uncles pillows. In the movie of their life, maybe there’s a scene in which my grandmother presses the last seams of the pillowcases and realizes she has enough fabric to make kung fu uniforms she knows will thrill the boys.

I’d have been happy with the pillows. They would have been gối ôm—“hugging pillow.” My brother, sister, and I grew up with gối ôm too, but we called them sausage pillows because that’s just what they look like: long, lean cylindrical pillows approximately the size of a human, cinched neatly at the ends.

I long took sausage pillows for granted as a quirk of my family of side sleepers. How was I to learn otherwise in my small Alabama hometown, where sleepovers were a homogenous mix of down and foam? I’ve since learned they’re somewhat ubiquitous in many Asian countries. In Thailand, my cousins told me, they’re called muon kang, which sweetly translates to “pillow next to you.” They’re tandayan and hot dog pillows in the Philippines, Dutch wives in Indonesia.

The earliest pillows, which date back to 7000 B.C. Mesopotamia, were first made of things like stone and wood. Then, the idea wasn’t comfort or lumbar support so much as lifting one’s head off the ground in order to keep pests and insects from crawling over one’s face. Such a luxury was reserved for the wealthy, until the Industrial Revolution, centuries later, led to something of a pillow boom.

Since the days of stone pillows, there have been great leaps in sleeping technology. Sausage pillows must be some highly evolved form, then, an instrument of sleep that brings one both physical and psychological comfort. One cigar-shaped Om Pillow, from the Vietnamese company Ru9, is filled with balls and blocks of memory foam. There is a vitality to this pillow. When you hug it, it hugs you back. “With this pillow,” one reviewer wrote, “I don’t think I need to hug anyone else to sleep anymore.”

I wondered whether my grandmother made eight identical gối ôm for my aunts and uncles, or custom-fit each relative to its owner. These days, she spends most of her time in bed. Her voice is light as feathers, our thoughts mostly unknown to the other without someone there to translate. The last time I saw her, I tucked her into bed and said good-bye. I don’t know when I’ll be home next, I said. She nodded and eased back, and I fluffed the pillows next to her. 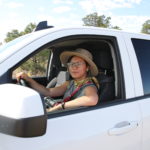 Lina Tran is a writer from the coast of Alabama. She lives in Milwaukee and mostly writes about science. She’s online @tinyeggs.