A voice-like cadence running through the family, whose members are children of many gods, telling them they are accustomed to certain kinds of death. Starvation. Salvation: too many burning desires, enough to bring down a house with it. The mother tells her son the best kind of prayer is the one that makes him fear not to open his eyes. He failed to pray, so he kept his eyes wide open all the time and became a phantom in everyone’s dream. He possessed the fearlessness of a ghost.

The mother tripled his daily meal portion. He refused. She threw it out from the blue French door. She wanted him to possess bigger body. He refused, and gazed over a window grate that no longer exists. He told her it reminded him of a cage. She witnessed him coming into the world like a storm without an eye. She knew she could not hold him back forever with only weather forecasts and two hands.

The mother has been sculpting a ghost for her entire life. Long before the son was born, she furnished their humble house with wooden appliances whose archetypes were trees fertilized by human flesh and agent orange. He couldn’t get his mind off it: the fact that everything he slept on were bodies in different forms. He traced his hands across the kitchen tables, trying to feel how the jaw bones arranged themselves, hoping to find a face he knew. In the end, he realized all births are conspiracies conspired by mothers in order to make children believe they will become something other than their parents.

The mother stepped into a room and immediately knew her duty. In fact, every room she stepped into would remind her of survival. She was ready for anything, given there’s no country, only the aftermath of a fire. In the kitchen, she would occasionally simmer oxtail and used the cooking time to breathe. In the washing room (which was a corner of the kitchen), where the fragrance of detergent pervaded the air like neurons, she’d close her eyes and breathe. All lights are hoaxes. Only the dark – how it smells, reminds her of where she came from.

His arousals were nothing like his father’s, which included watching his household explode like in a drama film. He let a boy enter him for the first time at the age of 14, unfastened his waist belt like loosening a safety strap in a car running at 100 km/h into a lake. The more he sank, the more the psalm sounded like something heard from a faraway world. As much as he remembered his father’s singing: tình cha ấm áp như vầng thái dương, he determined that he never deserved the sun at all. And for the other boy: he swore he could weave an armor out of foreskins.

This is how to sculpt a ghost: to remember how small the proximity between the dead and the living. His life is a fusion of everything from six decades before: things built just to lose their intended structure and collapse in a linearity. Somewhere around that, a farmer emptied a hay-full barn with ten thousand horses and filled it up with daylight. Perhaps he was one of those horses, spending his whole life emptying things with his mouth but the generational nausea wouldn’t spare him.

This is how a ghost knows himself a ghost: the closest he could make to understand family is the longest hair stranded on his mother’s sleeve, or the furthest his words travelled a page, or the light years it took to fully comprehend how hungry the whole family was and continue to be for the rest of their lives.

A tin shack fractures in the middle of a paddy field. The boy emerges from the shack and steps into the rain. As a Vietnamese, he feels the water washing through him like amnesia. 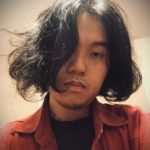 Tam Nguyen is an art writer, poet, born and raised in the sound end of Vietnam. His works appeared and are forthcoming on Heavy Feather Review, SOFTBLOW, Dryland, Roadrunner Review, Overheard, and elsewhere.