on my way to the mountain

my mother tugs my hand.
she shouts, as if i am
fifteen years old leaving
our apartment at night.
don’t go out there, it’s
dark. they’ll see you walking
alone and then they’ll rob you.
she says, there are a lot
of things you don’t know
about. i see the entrance of
a firefly’s mouth as if it
were a path to my ancestors.
in its stomach is a house
made up of my imagination.
again, the images i think
i saw in photos somewhere:
Vinh, Jerome, Thinh, Bac Hung
painting in a Northern garden
Huong listening to comrades talk
about LBJ pulling americans out
of Vietnam. Jerome, in hiding,
calculating the past week’s
expenses for the Southern Army.
Vinh, ripping apart the
poems that choir boys and Huong’s
other lover gave her on pieces
of paper tucked in a book
titled How to Speak French.
i pick up the scrap
and see a future where
my mother is in love in
her childhood village. Van is
sitting in the corner reading a
book watching my mother
get yelled at. An is at school
and his classmates avoid him because
of what his father does. the
teacher calls on him, and in this
story, only him. and in this
story, i pull my hand away
and feel something like
anger or claustrophobia
or tenderness. and then i
head towards the mountain. 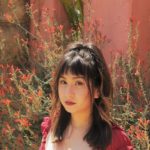 erika rose higbee is a second-generation Vietnamese American & Chicanx womxn from Garden Grove, California. She is a PhD student in English at UC Berkeley. At the moment, she studies memoirs written by migrants and displaced persons in the US; the history of Vietnamese Marxism and anticommunism, and the legacy of revolutions during the 60s.

In a Grossly Boring Town