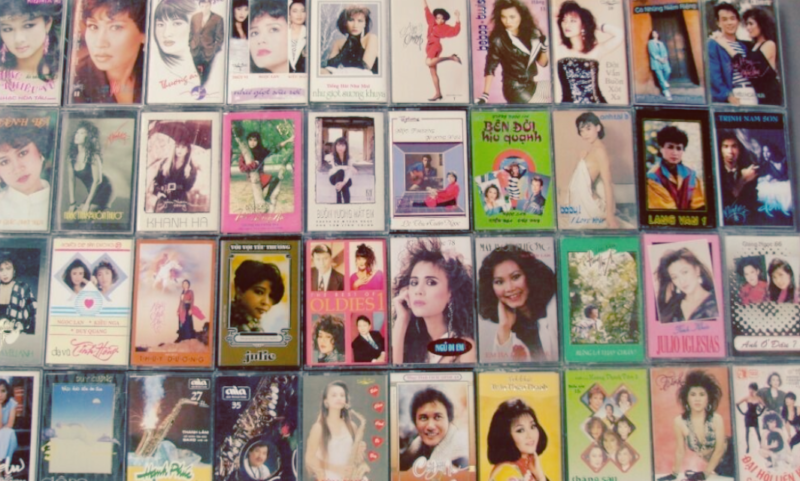 After a few reliable years of playing the same, selected stockpile of Vietnamese CDs accumulated in now obscure and defunct Vietnamese VHS rental and music stores that surrounded Arkansas and Kansas, my late father’s rotund black and gray hi-fi, which functioned more like a charming lo-fi audio system, Memorex boombox stopped playing music; the last noise it forcibly played out through its plastic speakers was a slight humming noise until it faded out completely, signaling its quiet end.

It was the last audio system left in the house after countless others have soundlessly lost their functionalities while others were donated because Má doesn’t like the much weightier stereo systems that Ba preferred. Those voluminous audio systems were an aesthetic that nostalgically defined my formative late 1980s, a fashionable decade I was born into but which bypassed my childhood memories, and the 90s to the early aughts after Y2K as an impressionable child; and even after then, when hi-fi home audio carried an interesting historical audio evolution as myriad iterations and forms are updated or readapted as an amalgamation of different sound systems to nostalgically recapture, consume, and capitalize on several unforgotten, always remembered eras since music has yet to cease production in the near future. Even as dystopia impends closer into a questionable yet tragic nonfictive reality where silences are politically and systemically enforced, music has yet to completely fade out at this time, unless music, once more, becomes censored and eventually becomes banned like the political unilateral spreading of book banning.

The Memorex’s demise prompted a livid, though substantially restrained, reaction from my mother. Aside from using her TV and Blu-ray player to rewatch her years of amassed collection of operatic cải lương that starred some of the most recognizable and famous stage opera singers I’ve seen on countless television screens at home such as Lệ Thủy, Phượng Liên, and Thanh Sang, or doing countless weekly rewatches of her current new favorite comedy film, Ricky Lau’s Mr. Vampire // Thiên Sứ Bắt Ma starring the late Lam Ching-ying, she’s been dependent on the Memorex to interrupt quiet interludes in her room where she observes how her once green patches of grass dries into a lifeless brown and tan color.

She asked my sister to purchase a small CD player with a reasonable price tag, but the sound system needed to have a crisp audio quality with nonexistent static so she can hear each lyric being sung. And since we don’t identify as audiophiles, we’ll take the most affordable, sometimes cheapest, audio equipment from Walmart because as normal citizens wanting to budget to survive, we—like several people in this current, volatile economic climate—do not possess any disposable income to luxuriate in anything that carries weighted astronomical price tags due to inflation. That and Má refuses to pay for any expensive technologies, since according to her, “their life spans are not worth the expensive long-term investment.” After a day of complaining about a few hours’ worth of monotonous silence, my sister decided to purchase a black Sylvania portable CD/radio boombox, a brand we don’t recognize but fits our restrictive financial criteria needs while fulfilling our mother’s vague audio and non-spacious specifications.

Since remaining at home and indoors, unless tending to her overgrown green garden and vibrant flower bed, she’s been relistening to the same CDs we’ve—especially my father— relistened to since forever while embroidering fantastically peculiar looking flowers and strangely shaped birds with color that schemes that feel visually jarring. Embroidering for her is a tranquil hobby where she busies herself so time passes by in monotony. But those lone solitude hours of her sitting next to the window, overlooking dry, brown, dying patches of green grass, in her room with loud Vietnamese music sequestering every wall and space presents an understated contrast to that room’s inanimate stillness. Sometimes, that silence is disrupted when the music is unrhythmically accompanied whenever Má lectures at the thin but threatening needle for pricking her index finger in her strong boisterous voice as she disregards the fact that she’s the who sustained the blood drop injury herself. After the small drop of blood dries out, Má resists the dull tender pain and resumes her repetitive stitching movement.

Specific yet singular nostalgia and memories from my parents’ history still linger in the house’s wall and permeate my sister’s small house. Someone pressed pause, briefly stopping nhạc Việt Nam from playing in the house; the only time we—meaning mostly Má, my sister, and me—listen to Vietnamese diasporic music is in the car; our mother, sitting as a passenger in our cars, prefers listening to songs she can understand, so a burned CD (a mixed, biased collection of various Vietnamese singers) with at least one hundred tracks to that continually plays, pauses, stops, shuffles, skips forward to the next track, and returns to a favorite song to accommodate Má’s needs to momentarily stop silence while relistening to a past and history that she hasn’t—or can’t—fully forget. The car’s audio system is an endless stream of nhạc Việt Nam, running on loop for Má’s. Those familiar sounds, beats, voices, and lyrics are unescapable, they keep returning to play on repeat.

Sometime in a forgotten past, Má pressed pause and stopped listening to nhạc Việt Nam  because she grew irritated at the repetitive cycle of the Vietnamese music industry. Years ago when Ba was the lone person still relistening to Vietnamese music, she shared this sentiment, and still repeats it like an unfading refrain to us and Ba, in a critical tone but without the bitterness: “nhạc Việt Nam is the same; we’ve heard all of it and we’re still listening to it forty years later. Nothing is new, everything and everyone sounds the same now.” One song, such as Trúc Phương’s song, “Đò Chiều,” (one of the many songs my mother has recently and will currently relisten to) composed in 1959, has several re-recorded renditions. While Má seems to favor Thanh Tuyền’s rendition, we’ve also heard the late Lệ Thu’s—who passed away in 2021 after complications with Covid—Phương Hồng Quế and Thanh Phong’s duet, Thanh Thúy’s, and Tâm Đoan’s renditions, among many, all of which riff with nearly identical chords and compositions, its lyrics unwavering in retelling the exact story with the same, angsty sentiment exalted as refrains in the diaspora. When relistening to different songs, the overtures are too analogous to differentiate until I hear the intro lyrics.

Now, a few years prior to living in the continuing pandemic that sees no end in sight, Má begins her relistening to the CDs I’ve carefully stored in the now spare room that Ba once occupied, a small, cramped space that hoarded a lot of his music collection and other miscellaneous items he collected in his life. Sometimes she recognizes the song and can identify the singer but can rarely recall the song’s title and composer, justifying her blank memory by describing how some of the singers now sound the same to her.