THIS IS FOR MẸ: Dear Mom

In anticipation of her forthcoming memoir, Christina Vo writes a letter to her deceased mother filled with love, complexity, and catharsis. Vo’s writing allows us to time travel with her, granting us the honor of sitting by her as she communes with her mother and guide on her quest to find peace and purpose.

Inspired by Ocean’s Vuong’s letter to his mother in the New York Times, this is for mẹ lives online as a borderless mailbox for Asian identified people to share stories rooted in motherhood, motherlands, mother-tongues, and family.

I wrote a book for you—to find you, to see you, to know you.

When you passed away, I did not know you. You did not speak of your history—of your upbringing in Cambodia, of your life in Vietnam.

As a kid, I would look through old black and white photos of you—the ones hidden, very much like your personal history, in a box in the basement.

In those photos, you looked so alive, so beautiful, so different from the woman that I knew as my mother. You were undeniably creative, caring, compassionate, and talented. Yet, there was a noticeable fear that lived within you.

I always wondered: Who was that woman in the photos? And why did she seem so different from the woman I knew as my mother?

In my twenties, I searched for you—by living and working in Vietnam, by spending time with your family, by seeing the women in Saigon, who were đẹp and điệu, and reminded me of you.

I saw you in them. And then wondered if you longed for the Motherland?

Our entire childhood, you hid your life, your past, your fears, and your traumas.

After you passed, in your box full of secrets, I found a marriage annulment certificate. I saw your name linked to a French man’s.

When I asked your brother and Dad why you had to marry a French man, they blew it off, saying it was nothing.

But there was a story there—one I didn’t know, and one that others didn’t want to talk about.

Dad once wrote that when you arrived in the States in 1976 and he picked you up at JFK Airport— something had changed within you. You were still the spontaneous and loving woman that he once knew, but emotionally, you were different.

Through Dad’s writing and conversations with family members, I would learn parts of your story.

I was told about the physical and emotional abuse that you and your siblings endured within your family. I am sorry for that. If your primary family unit didn’t feel safe for you, the rest of the world wouldn’t either.

I learned your family left Cambodia, because Vietnamese were being persecuted at that time.

You escaped to Vietnam in the middle of the war. You went to medical school, even though you loved languages and communications, and aspired to be an interpreter for the United Nations.

When Dad left at the end of the war, you were stranded in Saigon for another year with my brother, who eventually died there in Vietnam.

You pulled yourself together and worked as a staff physician at the French Grall Hospital and saved enough money to escape. Someone mentioned a communist official, and maybe he helped you in some way?

Years after you passed, your best friend hinted about things that had happened in France, where you landed, before arriving in the U.S.

All of those experiences were traumatic. You lived through so much.

When I was in my early thirties and had moved to San Francisco, a writing teacher read some of my stories about you.

He said to me, “You know your mother’s behavior was a little strange.”

I did not understand what he meant. Since you were the only mother I knew, I never questioned your behavior.

I came to the conclusion that you might’ve suffered from mental illness. I thought about your shopping sprees, your erratic nature. You were so loving in one moment, and so angry in another.

I asked Dad and he said you were diagnosed with bipolar disorder in Vietnam and that you were ashamed, so didn’t want to treat it.

Mental illness, in my opinion, can sometimes be trauma masked.

I wish you did not live hidden behind so many secrets, and so much suffering that you never had a chance to heal.

Nevertheless, you were still able to be a warm, loving, and doting mother, and friend to so many. You cared for others in a way in which you needed to receive care. I see that now.

Mom, I wrote stories to be able to remember you, to see you clearly, even though you had passed so many years ago.

Writing helped me heal–from your loss, and from other wounds. Maybe some of yours, too.

Mom, I think I did it. I think I transmuted some of the wounds passed down to me. These days, we speak a lot about international trauma, but not as much about intergenerational healing, which is what writing helped me to do.

I want you to know that if you were alive, I would help you see the other side of shame and fear. I would see you, I would understand you, I would love you just as you are.

I remember you, and I honor you, always.

The veil between the physical and the spiritual realms is thin, and we all need guides—thank you for being mine.

Mom, my first memoir—this one’s for you. 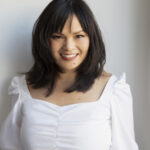 Christina Vo’s debut memoir, The Veil Between Two Worlds: A Memoir of Silence, Loss, and Finding Home, will be published in April 2023. Christina writes to explore her family history, her deeper purpose, and her place in the world. She is currently working on her second memoir.

Christina has lived and worked in Hanoi, Vietnam for international organizations including UNDP, UNICEF, and Solidardad. She was also a community manager for the World Economic Forum in Geneva, Switzerland and ran a floral design business in San Francisco. Her experiences abroad also inform and influence her writing. Christina holds an MSc in social and public communication from the London School of Economics, and currently resides in Santa Fe, New Mexico. Christina holds a BS in Public Health from UNC Chapel Hill and an MSc in Social and Public Communications from the London School of Economics. She currently resides in New Mexico, the Land of Enchantment.

THIS IS FOR MẸ: Measuring the Present Past