A little while ago, I went to Berlin to visit a friend who had been my roommate during my year abroad and to see the biennale. Our schedule for art viewing was desultory at best— on our way to Hamburger Bahnhof we stopped for late lunch, then tea, then got distracted during a long conversation about our grandmothers by an impromptu shopping trip and arrived at the museum in the midafternoon.

When looking at art, I always think back to a conversation I overheard between two older American couples in Paris, when, upon being asked if he had seen the entire Louvre, one of the husbands replied, “It only takes two hours to walk through.”

With enough time and space to sit, I could spend even an hour with a single painting if I enjoyed it enough. Some works are so heavy— I remember Korakrit Arounanondchai’s lush imagery in Songs for Living, which I watched submerged in a mottled cushion and bathed in blue, unaware of the passing of time— that I’d rather be fully immersed in them and then leave, like reading one story in a book and spending the rest of the day thinking about it, than move on to another.

Though of course, it’s not always practical.

We moved so slowly through two of the main exhibitions, savoring particular works (including two deliciously dissimilar sculptures by Leonor Antunes, named after two women we speculated could have been her lovers) that by the time we arrived at the hallway that housed the biennale, we were told the museum was closing.

So we returned the next day, this time in the early afternoon.

To reach the biennale, visitors walk through a turquoise tiled passage, which had once been the subway entrance to the station, and down a long, dimmed corridor lined with Richard Artschwager’s light installations which leads to the end of the building, to spacious industrial halls that had housed travel-worn trains during the night. A fitting way to travel to discover new worlds, this time curated around the theme of decolonization.

There were many videos, and many installations, but in this part of the biennale I discovered a string of Viet Kieu artists. I was first arrested by Thuy-Han Nguyen-Chi’s video installation, This Undreamt of Sail is Watered by the White Wind of the Abyss, where a vast, single screen hung suspended above a cobalt platform holding a hospital bed made to resemble a boat. Following the instructions, I slipped off my shoes to ascend the platform and lie on one of the mats surrounding the bed. On the screen above, indistinct forms from underwater undulate azure while Nguyen-Chi’s mother narrated her passage from Vietnam by sea.

I looked into the paintings of Tammy Nguyen which seemed to glow, lush greens and electric blues paired with colors like tarnished gold. Inside were shapes and images I had only ever seen in mother-of-pearl when, as a child, I visited with my family a workshop where they produced lacquered panels and hair ornaments.

And then I sat through the entirety of Tuan Andrew Nguyen’s The Specter of Ancestors Becoming, unable to look away, caught in a circle of four wall sized screens set a few meters apart that recounted little known stories from the American War in Vietnam. On one screen, an old man read aloud from letters, in another, an elderly woman narrated scenes from the past between a Vietnamese mother and her French-Senegalese soldier husband discussing the move to Senegal. In the next, the scene was recreated— the woman, Lan, argued with her husband in the kitchen of their home, shaking her head as he pleaded and threatened her in turn. Then the scene changed, and a grown son confronted his father about the mother left behind, whose existence he had never known about. He had never understood the teasing about his mixed blood until recently. On the side, sometimes dark and sometimes visible, there were historical pictures of regiments, and of Saigon long ago and of Senegal today, and of the families created through this lineage. Every person in these films, from actors to readers, seemed to be of biracial Vietnamese and Senegalese birth.

It was an interesting choice to have so many videos, and in this configuration, never being able to fully focus on one. I found myself wondering if they had been placed there, and if the story was told in this way to show the unreliability of narrative, of this mental replay of the past: unknown and unknowable events. So many stories of immigration and of those who had been left behind had and have been passed on orally, relying on the frailty of human memory, doomed to dim or change with every retelling, or to become something else, part reality, part fiction, was this Nguyen-Chi’s message? And then there was this— why are we as humans so attached to the idea of roots? Of bloodline, of origin, of a homeland. Why does the suggestion of mother of pearl make me long for something half-remembered?

My friend and I decided to visit the Dong Xuan market after the biennale, the largest Asian market in Berlin which happened to be Vietnamese. I imagined it as something similar to the many I’d visited when I lived in Vietnam: under the cover of umbrellas with individual stalls, and low plastic stools in primary colors around matching plastic tables. Instead, it was a maze of shops with partitioned walls inside of at least half a dozen warehouses. We entered through a parking lot and wandered through more parking spaces to the open doors of each warehouse to sift through all of the cheap imported wares I was so familiar with. Among the Vietnamese sellers were a decent number (perhaps a quarter) of Arabic speaking sellers, though I couldn’t identify exactly where they were from or if they were more of a mix, since there seemed to be no other Asians present aside from the Vietnamese.

We walked quickly, as my friend was searching for particular stores, and scenes flicked by like flashes of memory. A young Vietnamese boy of three crying as his hair was cut— a cluster of four or five of his relatives sat or squatted down to encircle him, each one speaking or singing or moving their hands in the air to distract him, while the barber, standing, hastened with quickened movements to finish the job. Three older Vietnamese men sat drinking coffee in a café, the late sunlight shining through the glasses of tra da. One store, so full of artificial flowers that the inside appeared as an fantastical house with halls of plastic blooms from which the murmur of voices could be heard.

And perhaps I had seen all of it before, in one way or another, once upon a time in Vietnam.

After a dinner of pho, sitting on a table outside, alongside the warehouses and looking out onto the parking lot, I felt a wave of homesickness or something like it. The smell that came from the restaurant was the familiar blend of bun, fish sauce, pho, and rice, the sounds of people speaking Vietnamese were almost comforting, and the Vietnamese people were dressed and styled according to Vietnamese fashions; one older woman, with long hair that must almost reach her knees, hair pulled back, could have walked off any street in Vietnam, but the trees were all wrong, maples, of all things, and a German family next to me was planning their night in clear high German, voices cutting through the tonality of Vietnamese.

And it’s strange to think that the same desires that I also carry with me, for a land I didn’t know and then grew to love, built this market. Stranger still to think of these copies of the homeland, one of which my grandfather moved to before he died: places that resemble a street or store or home in Vietnam and people who adhere to the customs or styles, as if living on an artificial island of the homeland that one might assemble wherever one goes.

Vietnam is only an example, and the same rings true for every people, and every culture, but what I can’t understand is why the ties, even if they have been pulled out or cut, never seem to lose feeling. Like a phantom limb of a kind, there is always a sense from another land, from that which came before. 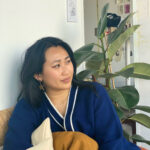 Rachel TonThat is a conceptual artist and writer working between Zurich and New York. She is part of the art book duo, Oreades Press, and her climate storytelling project, Impermanent Earth, was funded by the International Project Fund of ZHdK, where she recently completed a MA in Fine Art. Last year, she was selected for the inaugural She Who Has No Master(s) writing mentorship through DVAN.