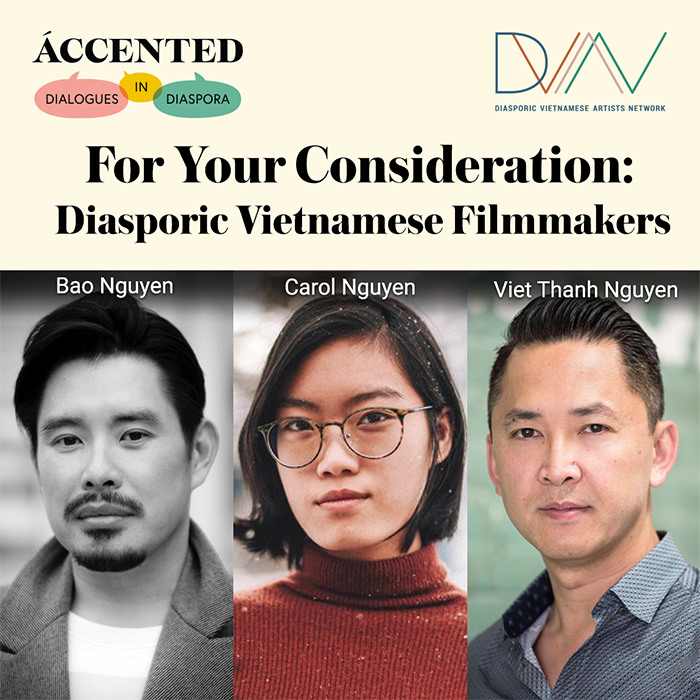 The next installation of ÁCCENTED: Dialogues in Diaspora will take place Friday, January 22nd at 7:00 pm PST / 10:00 pm EST, hosted by Pulitzer-prize winning author Viet Thanh Nguyen, and will feature filmmakers Carol Nguyen (No Crying at the Dinner Table) and Bao Nguyen (BE WATER). We’ll be rolling out the virtual red carpet for our first ÁCCENTED of 2021 for an intimate conversation with filmmakers whose recent works, partly inspired by their experiences in the Vietnamese diaspora, are contenders for the 2021 Academy Awards.

Join us on Zoom this Friday at 7:00pm PST. General admission tickets are $5 or by donation. Share the event and tag DVAN on Facebook and Instagram (@weare_dvan) for a discount code! Click here to RSVP for tickets.

Bao Nguyen is an award-winning filmmaker based in Los Angeles and Saigon. His work has appeared in the New York Times, HBO, Vice, NBC, ARTE, among others. He was the producer and cinematographer of NUOC 2030 a feature sci-fi that opened the Panorama section of the 2014 Berlinale and was awarded the Tribeca Sloan Filmmaker Award. In 2015, he directed the documentary feature, LIVE FROM NEW YORK! which opened the 2015 Tribeca Film Festival. He produced Tran Thanh Huy’s ROM which premiered at the Busan International Film Festival where it won the festival’s top prize, the New Currents award. In addition, it was one of the highest grossing films in Vietnam in 2020.

Bao Nguyen’s latest directorial effort BE WATER world premiered in the U.S. Documentary Competition at the 2020 Sundance Film Festival was invited to other major festivals such as Cannes, SXSW, Telluride, San Francisco, Hot Docs, Sydney, Hong Kong, among many others. BE WATER broke ratings records with its world broadcast premiere in the United States as part of Disney owned ESPN’s ’30 for 30′ series. Recently, Nguyen has also formed a new production company, EAST Films, with offices in Los Angeles California and Ho Chi Minh City, Vietnam. Nguyen, alongside other creative partners Ham Tran, Jenni Trang Le, Anderson Le, among others. They formed EAST to nurture and produce transnational stories with a focus on Southeast Asia. It is a creative studio with three silos — genre films for the local Vietnamese market, Pan-Asian streaming series based in Southeast Asia, and prestige fare to support the burgeoning cinema culture of Vietnam and bring it to international audiences. He is an alumnus of the 2012 and 2014 Berlinale Talent Campus as well as a Firelight Media Producers Fellow. He earned his BA at NYU and his MFA at the School of Visual Arts in New York City.

Carol Nguyen is a 22 year-old Vietnamese Canadian filmmaker based in Toronto and Montreal. Her films often explore the subjects of cultural identity, family, and memory. Her most recent film “NO CRYING AT THE DINNER TABLE” premiered at the Toronto International Film Festival and had its international premiere at IDFA 2019, where she was also invited as the Opening Night speaker. It also received the Jury Prize for Short Documentary at SXSW. Carol is a 2018 Sundance Ignite fellow, Adobe Creativity Scholar, and a TIFF Share Her Journey ambassador, where she strives to empower diverse voices and women through her own stories and personal experiences in the film industry. Today, Carol is working towards developing her first documentary feature as well as an animated short.

Viet Thanh Nguyen is the author of The Sympathizer, Nothing Ever Dies: Vietnam and the Memory of War, The Refugees, and Race and Resistance: Literature, Politics and Asian America. His most recent book was Chicken of the Sea, done with his son Ellison. His next book is The Committed, the sequel to The Sympathizer.

Philip Nguyen is the producer of ÁCCENTED: Dialogues in Diaspora presented by the Diasporic Vietnamese Artists Network (DVAN). He teaches Asian American Studies in the College of Ethnic Studies at San Francisco State University and is the Community Organizing Manager for the Vietnamese American Roundtable, a 501(c)(3) nonprofit organization based in San Jose, California. Philip serves as the President of the Union of North American Vietnamese Student Associations (UNAVSA) and as the Co-Chair of the Young Vietnamese Americans (YVA) Committee for PIVOT – The Progressive Vietnamese American Organization.

With curated custom cocktails by mixaphoria: Thuy Phan is the creator of mixaphoria, a virtual bookbar that curates and designs cocktail pairings for books by diverse writers. mixaphoria’s mission is to encourage readers to engage with diverse literature and spark thoughtful discussions. Thuy’s recipes and book reviews for each pairing can be found at mixaphoria.com or on Instagram @mixaphoria. Thuy is also a dancer and lives in MA.

Eastwind Books of Berkeley has been a major source for Asian American literature, Asian Studies, Language Learning, Traditional Chinese Medicine, and Martial Arts books. All books featured in ÁCCENTED are available at https://asiabookcenter.com for a special discounted price.