Don’t strain your weak eyes looking
The frogs are gone from their bushes
The yellow lizards are watching
The bugs are there, creeping
The flies and ants and even the little birds
But those small green frogs are gone

Maybe Mrs. Cuc ate them with rice
Maybe she sliced
Them up
Maybe something wild got them,
Although I don’t know what would eat them
Except Mrs. Cuc

Mrs. Cuc ate the big frog
That you found on the lawn
When you were mowing

But Mrs. Cuc has been sick
Hasn’t been around lately

And besides, the frogs are damn small.
Skinned they’d provide less meat than all
The flesh under your thumb nails
Or the snails on the nearby wall.

The frogs could be out there right now
But as far as I know
They’re gone.

The lizards chirp on
But the frogs are gone

David A. Willson wrote that poem while in Viet Nam where he served as a typist in Saigon and Long Binh, 1966-67.  There was a reason why the frogs vanished, and maybe Mrs. Cuc as well. 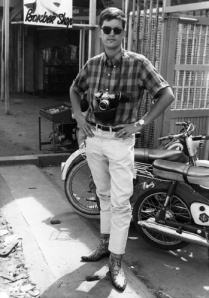 After each day’s spraying missions, the United States dumped surplus dioxin in the Long Binh water supply.  Everyone there was drinking the stuff,  cooking and bathing in it.

David came back and enjoyed a long run as a bibliographer of the US literature from the war and as the premier novelist of the majority American uniformed experience of that war.  See his Rear Echelon Motherfucker (REMF) novels, detailed with the rest of his work at his Wikivietlit entry.

But the dioxin has caught up with him and David is at last a casualty.  The Veterans Administration is fighting off his multiple myeloma after his private insurers explained that the benefits of therapy would not outweigh the costs.

We disagree.  David will be alive, compos, and mobile to star in Viet Nam Literature Seminar 2, our first annual Veterans Day meeting, conducted by teleconference at 4:30 PM (NY), Thursday, November 11.

VVA Veteran arts editor Marc Leepson will interview David about his life and work, with an audience of his peers.   The critic Kali Tal, the folklorist Lydia Fish, the librarians John Baky, Walter Jones and Steve Maxner, the novelists Wayne Karlin and John Clark Pratt, the philanthropist Randy Fertel, the poets David Connolly, W.D. Erhhart, Alan Farrell and Stephen Sossaman, and the publisher Jerome Gold will be among those listening in and asking questions.

You come, too.  I am often struck that people with polyvocal understanding of Vietnamese America and Viet Nam know only the American veteran authors who have achieved commercial success with a New York literary publisher.

Tim O’Brien is a fine author.   But David is the tip of an iceberg of truly anti-heroic literature from that war which shares many themes of dislocation and split allegiances with post-colonial and post-1965 ethnic American literature.

Check it out.   Attendance is free, or your cost for a call to the teleconference bridge in South Dakota.  Please write to me at [email protected] for the dial-in number and access code.

I will also send you the most recent three chapters of David’s  final book, REMF Diary of Dying and Bureaucratic Complexity.   If you want to read more from 1966-1967, see the manuscript USARV Poems.

Did you like this post? Then please take the time to rate it (above) and share it (below). Ratings for top posts are listed on the sidebar. Sharing (on email, Facebook, etc.) helps spread the word about diaCRITICS. Thanks!