THIS IS FOR MẸ: The Legend of The Taiwanese Beef Noodle Soup

In this except of this is for mẹ, Zachary Schwartz anchors us in the familiar scent of grandma’s noodle soup, and takes us on a sensory journey through time and identity as he explores the weight of his multiracial ancestry, and how he found home in food.

Inspired by Ocean’s Vuong’s letter to his mother in the New York Times, this is for mẹ lives online as a borderless mailbox for Asian identified people to share stories rooted in mothers, motherhood, motherlands, mother-tongues and family.

The Legend of The Taiwanese Beef Noodle Soup

It’s just not in the culture, but it doesn’t mean they love their kids any less. Growing up, love came to me every Sunday night in the form of a spicy, soulful, and savory broth, filled with generous cuts of beef, tomato, napa cabbage, and heaps of noodles, seasoned with anise seed, ginger, garlic, and other inflections: Taiwanese beef noodle soup.

Those four words are enough to slingshot me down a memory tunnel where, similar to the ending of Ratatouille, the entirety of my childhood experience floods like a torrent down my consciousness. Like an ant that inhales a parasitic spore and loses its autonomy, climbs up a tree, and allows its body to be used as a receptacle for the spore to reproduce, I too want to climb into my bed, curl up into a ball, and whisper those words, over and over, into the wall: “Taiwanese beef noodle soup.”

I grew up in a suburb on the west side of Cleveland. For the first ten years of my life, as a mixed-race Jewish and Taiwanese kid, I was the only religious and ethnic minority that I knew. Much of my childhood was spent wishing I was white. I remember going through a phase where I begged my parents to buy the boxed dinners, pierogis, and salisbury steaks that I associated with my “normal” Irish-American neighbors. I remember wishing that my hair was straight and my eyes were blue. I remember not having many friends.

On top of that, during the early years, my mom was not around much. She worked long hours at a high-powered law firm in Cleveland. Sometimes her only presence during the school week were lovely Post-it notes she’d fasten to a hasty paper bag lunch. Many nights my dad would cook Hamburger Helper or Hungarian noodles.

But on the weekend, the the house would fill with the wonderful aroma of Taiwanese beef noodle soup—the end result of hours of brewing beef, green onion, tomato, garlic, cinnamon, soy sauce, and other savory ingredients. 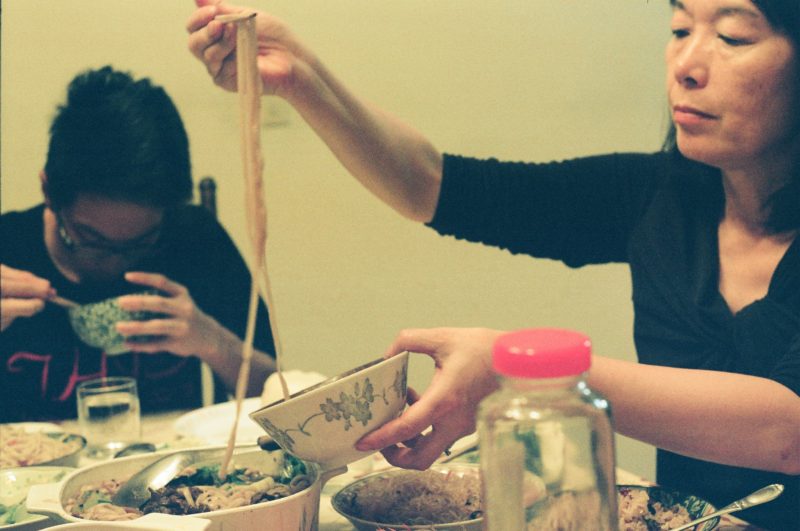 Probably immersed in some tome in my room, I would fly down the stairs, clearing four or five steps at a time as only a seven-year-old can do, breaking into song and dance at the bottom of the stairs. “Beef noodle soup! Beef noodle soup!” I’d chirp.

And when I sat down at the table, barely able to contain my excitement, and my mom brought over the steaming bowl, topped with a fresh sprig of cilantro, and I slurped down the rich, aromatic broth, the hot bubbles of beef fat spilling down my throat, all I heard and felt was “I love you.”

The East Asian relationship with food is tighter, perhaps, than any other culture on Earth. The biggest cultural export of China—a nation of a billion-and-a-half—is Chinese food. Most people around the world solely encounter East Asian culture, or its local simulacrum, through its signature dishes: pad thai, pho, sushi, ramen, bibimbap.

Chinese cuisine, with its limitless combinations of sugar, spice, and everything with rice, is one of the most floral and thriving on our planet. Chinese food derives its deliciousness, as most worthwhile things do, from adversity. It comes from a people so starved by the latest famine, flood, or empirical decree that they would have the desperation, and consequent inspiration, to combine wood-ear fungus with cilantro, frog with pickle, birds nests and red vinegar…

In East Asia, many region have their own style: of martial arts, craftsmanship, cooking. The same way American cities take pride in their own local flavor of hip-hop, different provinces of East Asia have dishes they’d love to hold up against the town down the road.

Over the decades, Taiwanese beef noodle soup developed a flavor of its own. Today, there are streets after streets in Taiwan devoted to the dish. When tourists come from China, they come to eat our beef noodle soup.

Taiwan, like Texas, has been ruled over by different entities in its lifespan: the Aborigines, Dutch, Qing Dynasty, and Japanese Empire. Taiwan now exists as a precarious autonomy under constant threat from the Chinese. China insists that Taiwan is part of China, a claim that has made multiple generations of my family take to the streets in protest.

The frightening monoculture of China looms over Taiwan like hurricane clouds. But we have our own history, our own culture, our own ethnic makeup—many Taiwanese have Japanese and Aborigine blood—and our own way of making beef noodle soup. It’s not just niúròumiàn, 牛肉麵 — it’s Táiwān niúròumiàn, 台灣牛肉麵.

That’s why it’s our national dish.

I had made it to college in New York City. I was standing in a computer lab as two girls argued about me in front of me.

The girl who was telling me I was white was Indian. Perhaps it was a way to compensate for her own middling place, as an Asian in the intersectional stack, by “othering” me.

The reality is, it didn’t matter what either of them said. I knew what I was, and that’s what counted the most. But I can’t admit it wasn’t troubling. After eighteen long years, I had finally found the confidence to be proud of who I was as an Asian-American. And now someone was trying to take it away from me. 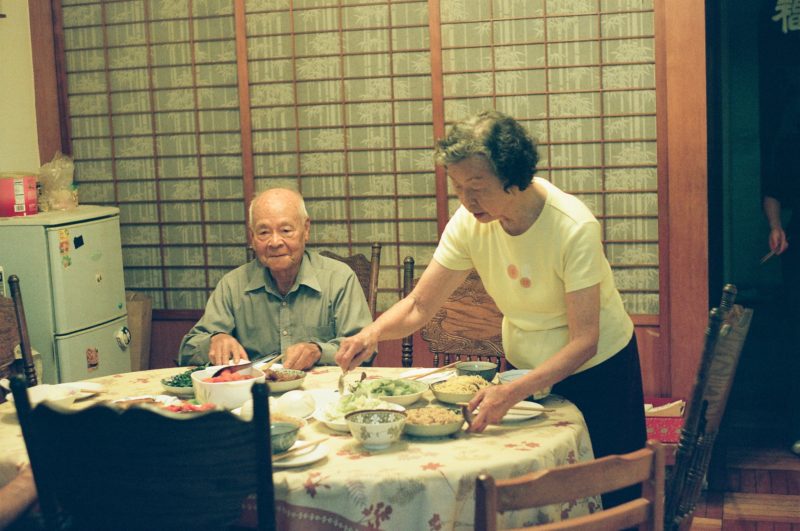 It wasn’t the only time it happened. Numerous peers in college, obsessed with race and identity politics—usually as a way to distract from their own economic privilege back home—would try to dictate who was “white-passing” and who wasn’t. I sometimes bore the brunt of that as a way to diminish my voice as a writer or rapper.

Later that semester, I went to a Chinese restaurant with a few friends. I ordered some of my favorite treats: cold jellyfish, razor clam, West Lake beef soup. One my friends observed something: “You’re very American, but you can tell you’re the child of an immigrant because of what you eat.”

My paternal side is Jewish, and I remember a story from my childhood. At the concentration camps, Allied soldiers would walk around, calling the first words of the Shema—one of the foundational prayers of Judaism—out loud. “Shema Yisrael” (Hear, O Israel). Even children who remembered little else would call back: “Adonai Eloheinu, Adonai Echad” (The Lord is God, the Lord is One).

Maybe, similarly, you can tell an Asian from their palette.

To be Asian is to be intimately connected with its food. After all, your body is what made up of what you eat. A lifetime of Asian food has presumably infused my cells with the essence of Taiwanese beef noodle soup and other delicacies.

Any Asian will tell you that food might possibly be the best part of our culture. I think of my cousins in Taiwan who are forced to endure long hours of school, then after-school “cram school,” then after-cram-school after-school. But in-between the oppressive hours, they get to dine on glorious box lunches and home cooking that puts the peas, carrots, and unseasoned beef of Anglo-American cuisine to shame.

Someone can question my identity, but I can go into the Asian market and identify every unusual ingredient or herb and parrot what my mom taught me: “This will make your eyes better. This will cure your depression.” I have my family’s recipe of Taiwanese Beef Noodle soup, passed down from my Ama to my mother to me, held close to my chest like a sapphire.

When I was younger I used to eat Taiwanese beef noodle soup. Now every weekend or so I spend the requisite hours cooking it. I slice the beef, chop ginger, and boil water. I hear my mom’s gentle instructions as I sprinkle in anise seeds. I feel the hum of ancestral memory as I wash and stack the napa cabbage. And whoever I serve it to—my friends or my girlfriend, my future wife or children—will learn about the legend of the Taiwanese beef noodle soup.

And it will be delicious. 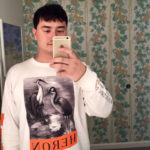 Zachary Schwartz is a Taiwanese-American writer from Cleveland, Ohio. He writes about hip-hop, mixed-race identity, subcultures, crime, and other topics. Some of his stories include playing chess with GZA from Wu-Tang Clan, going “on the campaign trail” with John McAfee, and participating in an ayahuasca ceremony in Mexico and discussing it with Deepak Chopra. His stories have been published in Rolling Stone, Playboy, Vice, New York Tyrant, and other magazines. He graduated from Columbia University in 2017. He also makes rap music and short films. He can be followed on Twitter, Instagram, and his website.

this is for mẹ

THIS IS FOR MẸ: If I Wasn’t an Asian Woman

I would not be blamed for the illness in another person's heart.
Read more
Essays

My father wrote a book, which he spent much of the last decade researching and writing without cease. It is over 2,000 pages.
Read more
Essays

Your Heroes Were His Villains

“Baba, your heroes were his villains,” I explained, before telling him that many members of Sydney’s Vietnamese community were still traumatised from the war.
Read more