THIS IS FOR MẸ: Measuring the Present Past

Anna Nguyen generously shares a recipe for đồ chua, straight from her mother’s mouth, then lovingly prepared by her hands, before the flavours and textures reverberate into the hearts and minds of the diaspora as we eat to commune with our families and histories, past and present.

Inspired by Ocean’s Vuong’s letter to his mother in the New York Times, this is for mẹ lives online as a borderless mailbox for Asian identified people to share stories rooted in mothers, motherhood, motherlands, mother-tongues, and family. 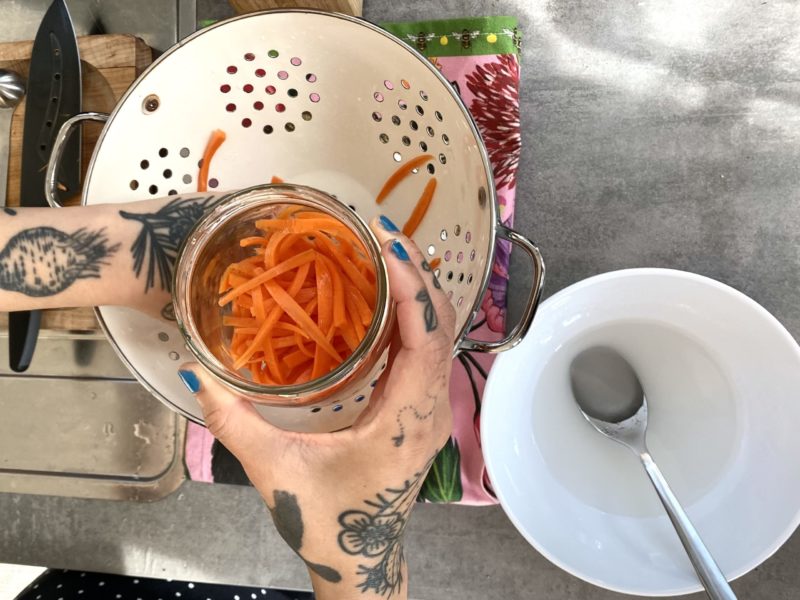 In between playing with other children and being reminded by Ma to eat my food, I remember hearing snippets of stories, unsure if memories about war and their home were in the present or in the past. In my ability, or inability, to speak Vietnamese, my lexicon and my tenses are extraordinarily simple, with some few words recycled in hopes of conveying context and time. My informal and colloquial speech habits were accepted by both of my parents, who themselves often placed the verb nhớ in in front of a specific year or time period, a move I’d mimic. In the nineties, their Vietnam was stuck in the past, never progressing past 1975. Twenty-five years later, my mother would return to Vietnam, imbuing the Vietnam of her past with new stories.

In her essay, “The Measurements,” V.V. Ganeshananthan connects food and conflict when she shares how the Sri Lankan war and politics were common subjects during mealtimes. She observes how people, related or not, learned to disagree, agree, avoid particular topics, or stop attending these events altogether. In this story about political strife and displacement, there’s also a connection to the elusive idea of a recipe. Ganeshananthan writes about her mother’s ability to cook Jaffna-style chicken curry without measurements, a recipe she craves and often cooks. During a phone call, her mother asked, “Weren’t you watching me cook while you lived with us?” to which Ganeshananthan responded, “Yes. No. Show me again.”

I think about this story often when I ask my mother for recipes, requests that are so amusing to me because she has cooked from her same mental cookbook for more than forty years. Neither of us are literate enough in Vietnamese to actually write in formal Vietnamese. Ma can read, but she’s slow to write. She stopped attending school when she was a young teenager, she always shares somewhat regretfully, but more matter of factly.

When I’m with Ma in the kitchen, I’ll listen to her gossip about friends or she’ll repeat news she heard on the Vietnamese media channel. I don’t always understand everything she’s saying or know who exactly she is referring to or where she is in the story  – there are too many moving parts in her rapid vignettes that shift everywhere from Vietnam to Arkansas to Delaware – but I’ll murmur along, making sounds of agreement or asking her to repeat a name of a village or her new friend, all the while more focused on her every effortless movement as she makes soups, phở, and đồ chua. No matter how many times I watch her make the same dishes over and over again, I’m unable to replicate anything without a recipe as guidance. I’ll look up recipes online and try to compare and corroborate memories of Ma cooking the same dish. Oddly, whenever I make a lasagna, dough, or quiche, I can improvise. With Vietnamese food, I lack certainty.

One evening, when I still lived in the Boston area, I answered a call from a very enthusiastic Ma. She asked me if I had a pen and paper around. She had been tinkering with a recipe for đồ chua and wrote down the measurements. Now it was time for her to share it with me.

“Are you ready?” I heard paper rustling on her end.

I put Ma on speakerphone and pulled up my text messages. I had decided to text it to my partner, who wanted the recipe. My notes app was a writing mess.

“Rồi,” I answered in the affirmative. Another word that my parents have used to express time.

“You can use carrots or radish,” Ma preambled. “Just be sure to grate them into very thin slices.”  Then she read from her notes.

“In a bowl of the grated carrots or radish, add 2 teaspoons of salt and 3 tablespoons of vinegar. Mix well.” When using measurements, she switched to English, but she recited the numbers in Vietnamese.

“Let sit for about 20 to 30 minutes,” she read. “Then run cold water through the carrot mixture. Use a colander. The vinegar should be washed with the cold water thoroughly. Use your hands to squeeze any remaining liquids carefully. Do this again, one more time.”

“Then, mix 1 cup of sugar…” Ma stopped and went off script. “You need vinegar, but not one cup. But half a cup is not enough.”

“Three-fourth cup?” I ventured in English. I wondered what she had scribbled. If she didn’t have an exact measurement, what notation was on this step?

“Three-fourth?” she repeated in English. “That sounds right.” She started over. “Mix 1 cup of sugar, ¾ cup of vinegar, and ¼ cup of cold water. Mix until the sugar is dissolved. Add ¼ teaspoon of salt. Taste for preference. Then place carrots in a jar and pour liquid mixture in. If water does not reach the rim, add more sugar and vinegar. Carrots have to be underwater. Let sit for two hours.”

“You only let it sit for two hours?” I asked, surprised. I scanned my translated fragments, all written in the present tense, the way of recipe writing. “It’s not fermented?”

“No, this takes only two hours because you use vinegar,” she answered.

I asked about the necessity of rinsing the carrots. If they didn’t need to be fermented, surely I could omit this step, I told her.

“It helps soften the carrots,” she said adamantly. Later, she’d tell me I could let the submerged carrots sit for an hour or even two hours, depending on how soft I wanted the texture to be.

I used the recipe to make Ma’s quick pickled carrots. I followed every instruction painstakingly. When I made bún, I eagerly topped my bowl with đồ chua. The carrots were a bit too sweet for my preference, a sentiment I expressed to Ma later.

“Adjust the sugar for your next batch,” Ma responded. “Some like đồ chua sweeter, some like it a bit more sour.”

“And that wouldn’t change the measurements for vinegar?” I wondered out loud.

“You must nếm everything when you’re making it,” Ma instructed. When she used that word, nếm, I could picture her beckoning a spoon near my face. “You don’t actually need the measurements. Just taste when you add the vinegar and sugar. When you make it so often, you’ll know how much to use.”

Two months before I moved to Germany, Ma came to visit our small studio apartment in Boston. On the third day, she seemed restless, perhaps because she was used to taking care of four young grandchildren in Delaware. We had planned to make bún with the homemade egg rolls Ma brought with her. She always traveled lightly. In addition to her carry-on duffel bag, she took a large shopping bag full of home-grown vegetables and egg rolls. She had no checked luggage.

I asked her if she wanted to help me make đồ chua. In the kitchen, she asked for a cleaver. She quickly and deftly sliced leftover carrots into thin matchsticks. I knew better than to recite her own recipe to her. So I just stood by, attending to her requests for vinegar, salt, sugar, and a jar. She didn’t measure anything. When she added sugar to the small bowl of vinegar, she poured from the bag. It was difficult to estimate whether her liberal use was ¾ cup or less. She motioned for me to nếm, a spoon already in the air. Her đồ chua was neither too sweet nor too acidic. It seemed just right.

Now when I make đồ chua, I always have to scroll through my own text messages to locate the recipe. It’s stuck in the past, yet I haven’t committed it to memory, nor have I committed to the right amount of sugar. There are times I don’t rinse the carrots at all; other times, I simply follow her recipe. Each batch tastes different from the last. 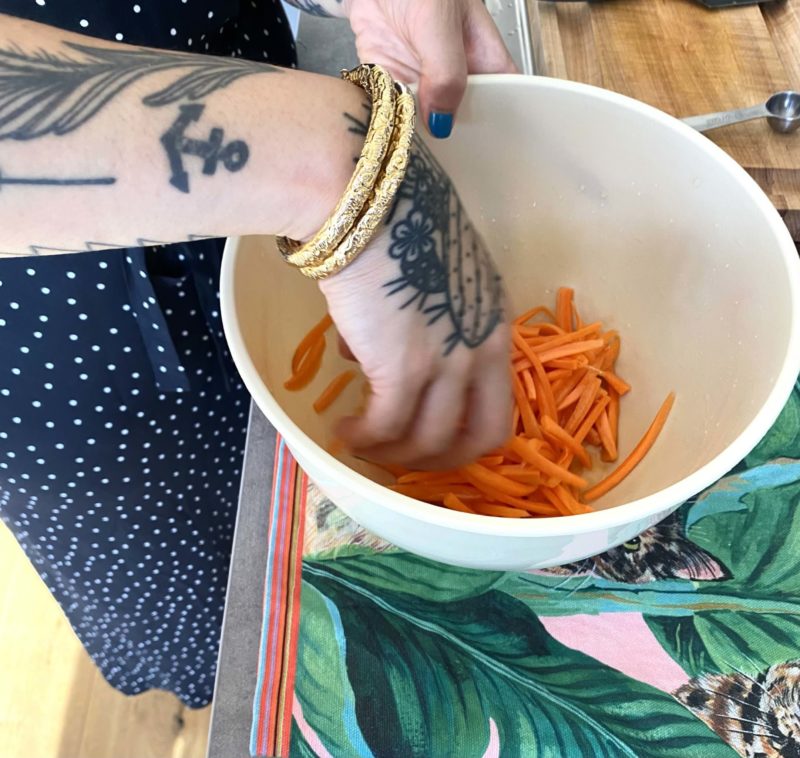 Anna Nguyen is a PhD student and instructor in the Faculty of Arts and Social Sciences at Leibniz Universität Hannover in Germany. Her research focuses on the rhetoric, composition and literary studies of science, literature on food, citations, and social theory. She is especially interested in theoretical creative non-fiction, where social theory, thinking about food, and first-person narrative blend without enforcing academic conventions. She hosts a podcast, Critical Literary Consumption.

THIS IS FOR MẸ: Dear Mom