Originally featured on peril.com.au, Lucy Van gives us an in-depth review on Audrey Chin’s book As the Heart Bones Break. 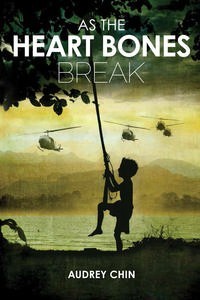 It strikes me as rather strange that as a literary type with a Vietnamese father, I have never read any novels about Vietnam or the Vietnamese diaspora. No, not even any Graham Greene. Chinese, Filipino, Japanese, Pacific Islander – yes, I have read books by authors that link their plot or persona to these categories. But Vietnamese? No. Why is that? Perhaps I have watched too many films from the 1970s and ‘80s, the American anti-war canon that counts Deer Hunter, Apocalypse Now and Platoon in its number. Perhaps Vietnam could not mean anything but the war, lurking in the background if not thrust in the foreground of the imaginary tableau that materializes whenever anyone says ‘Vietnam.’ So it may seem to the casual, non-Vietnamese reader or viewer in Australia. But for me, too – someone whom as a halfie is both of and not-of the culture, closely related to, but always somehow outside of it – the war is the beginning of everything, the first cause. It is what brought my father as a young man to these shores. Here, cut from his roots, he began a new family of his own. The war has everything to do with the strictness and anger that shaped the conditions under which I was raised. How well do the unpredictability of these rages and unspoken resentments show me, much later in life, that our little family was living along the cracks of many unknown, unhealed wounds.  I speculate of course, because I must – I have never been properly told. For all the Vietnam/Vietnam war references that flood our popular culture, Vietnam remains to me a site of silence, both a place and a set of events that I know already everything and always nothing about.

So it was with bogus sense of familiarity that I opened Audrey Chin’s As the Heart Bones Break. Another war novel, I thought, as if the mere proposition was enough cause for weariness. I wonder where this cynical trepidation came from. I only realised after I finished this book that I had no idea what to compare it with because I am actually quite the novice when it comes to that war. What I’m really familiar with are its brute signifiers: the psychology of the jungle, the absurdity of America’s involvement, the crisis of the West, free love and rock and roll. In other words, what I think I know is framed by the reasons Vietnam matters to the West. Implicitly, I think, Western consensus on ‘Nam’ has lead me to believe that the Vietnamese themselves were only minor players, merely a supporting cast in that theatre of war.

Chin’s novel marks a departure from this customary signification with a narrative whose raison d’etre is to put the story in the mouths of the Vietnamese. The novel relates the story of Thong Tran, child of multiple fathers, and subject of complicated, divided loyalties. In this respect Thong suggests a postcolonial Everyman, whose ideological status is fluid rather than static, whose national and familial affiliations are contingent instead of determined. Drifting between imperialist, capitalist and communist allegiances, Chin’s protagonist reflects a world in which ‘sides’ are utterly unclear, their entanglements the texture of everyday life. A great achievement of the novel is its depiction of this uncertainty of identity during war – how its pervasiveness plagues the lives affected by war with unanswerable questions and traumatic regret. The fabula is straightforward enough. Adopted and raised by a southern Vietnamese bourgeois family, Thong sets off into the world as an engineer. On the surface Thong escapes the rough edge of being on the war’s losing side by seeking refuge in America, where he becomes an upwardly mobile member of a model-minority. Shadowing this story is the tale of Thong the spy, working for the Communist regime over half a lifetime across Vietnam, America and South-East Asia. Set across a globalised, pan-Asian Pacific Rim in a palimpsest of times and places, the novel seeks to shed light on the present through the karmic consequences of choices made in the past.

In an obvious way this meticulously layered novel is simply responding to one question: what does the war mean to Vietnamese people? Interestingly, however, Chin herself is not Vietnamese, but a multicultural Peranakan woman in Singapore. She describes herself as having been ‘a daughter-in-law of the Vietnamese diaspora for thirty years’ through her marriage to Minh, her Vietnamese husband. Presumably Minh has shared not a few stories and vistas with Chin, as she writes a lived Vietnamese experience with an assured and vivid touch.

The funeral hall, with its smell of incense seeping into the hot moisture laden air, makes Nina feel sick. There is no room in the kitchen for her tall body, long elbows and American ignorance of wood fires and kerosene fueled stoves. She’s gone there to help. But the women labouring at the endless rounds of meals for the visitors have no time to tell her what to do, not even Huong and Kim. (224)

This passage seems to echo Chin’s status as teller of a story that is not her own. There she is, but what is her narrative purpose? As apparent ‘daughter-in-law’ to the Vietnamese diaspora, Chin’s closest correspondence in the novel is not the protagonist but Thong’s wife, Nina. Increasingly alienated by the discovery of Thong’s secret past, Nina’s character provides one of the more interesting sites of entry into the novel, simultaneously detached from and implicated in Thong’s story. Many Western and diasporic readers might align most with Nina’s position, whose understanding is hampered by an excess of unlived knowledge and presumption about the Vietnam war.

With this in mind, one might suggest that Chin lost an opportunity to exploit the dramatic potential of Nina’s perspective by choosing to frame the story through Thong, using the second person.

You go into the den where Loc, your brother, and Binh are sitting with some other men from the old Sagon neighbourhood. A music video is playing on your new big screen TV … (43)

With the pronoun ‘you’ pushed to the foreground, this passage is characteristic of Chin’s prose throughout the novel. There is no doubt that you, the reader, are supposed to identify as the protagonist Thong. Perhaps Chin’s perspectival experiment is simply intended to fire up greater imagination and empathy towards a Vietnamese story, though I wonder how successful this attempt was, if this was indeed the intention. I must admit I found the use of second person really jarring. Somehow, the lack of ironic distance brought about by this forced identification made me much more dubious about the story I was being told. I’d like say to that this is all just my own obtuseness – that I’m missing completely defensible and necessary about Chin’s storytelling. But I note that Chin released a revised, first person version of the novel after receiving negative reader feedback about her use of the second person, which is so far only available in the US.

I imagine this revised version will receive a warmer response from readers, for there is still much strength in Chin’s novel. There are not many stories told from a pan-Asian global perspective, but As the Heart Bones Break delivers a nuanced narrative whose topography is steadfastly unconventional, even for diasporic literature. Chin’s use of Confucius and Buddhist tropes as literary devices is also one of the better experiments of the novel. Its karmic logic adds a particular depth, and an at times refreshing touch of ironic distance, to a plot anchored by unspeakable trauma. An expansive narrative that anticipates a globalised Asian subjectivity, As the Heart Bones Break illuminates a complex history that’s often overshadowed by Western mythology about the Vietnam War.

Lucy Van was born in Perth in the 80s. She learnt to swim in the Indian Ocean and learnt about poetry and music from the friends she grew up with. She nearly began a job in publishing before deciding to move to Melbourne to write her thesis on postcolonial poetry. She eventually finished her PhD after having a child and getting a job at the University. She co-founded the LiPS poetry group with George Mouratidis and has edited for Peril Magazine and Mascara Literary Journal.

Please take the time to share this post. Sharing (on email, Facebook, etc.) helps spread the word about diaCRITICS. Join the conversation and leave a comment! Have you read Audrey Chin’s book As the Heart Bones Break? If so let us know what you think!