And it’s quite hypocritical of me to criticize this ambivalence and unwavering nationalistic allegiance because I still relisten to Vietnamese diasporic songs and reference them quite a bit. But songs composed in the pre-1975 era, specifically songs written about the war and soldiers’ lives, are discernibly hinged in undying nationalism. While doing some research about certain Vietnamese composers during the war, I found some reports about how some of the most recognizable Vietnamese singers such as Hương Lan and Lynda Trang Đài, among several, were/are Trump supporters, which isn’t that much of a surprise since some of the songs they re-sing and re-record include refrains that elide the racialized politics of some of these very Vietnamese singers, although their existing messages are clear. Viet Thanh Nguyen writes extensively about the ideological connection between white nationalists and Vietnamese nationalists: “a radicalized nostalgia for a lost country and a lost cause.” As refugees and immigrants, some Vietnamese artists see themselves as outliers because they resettled in America the correct, proper way. But what is the proper way when the United States has systemically failed them and several American-born citizens have perpetuated hate crimes against the Asian and Asian American communities? Do they not recognize they’re perpetuating the same racist attacks and xenophobic language they once also experienced? Or do they just not see themselves as racist even when supporting racist ideologies? Or see how their support being weaponized for white supremacist ideologies?

Since relistening to several Vietnamese diasporic songs a few years back, I’ve begun to interpret the lyrics as conveying a sense of tragic optimism, a pathos in Vietnamese diasporic music. According to Scott Barry Kaufman, tragic optimism is a phrased “coined by the existential-humanistic psychologist and Holocaust survivor Viktor Frankl. It’s the “search for meaning amid the inevitable tragedies of human existence, something far more practical and realistic during these trying times.” Is this not romanticizing tragedy; or does one have to experience tragedy to feel optimistic? Is this not another oxymoron? Or am I again being cynical? When listening to Vietnamese diasporic songs, beats of tragic optimism, veering towards outward despondence, can be heard and romanticized as there’s this inherent sense of hopefulness that also steers itself to an inward resignation that is often ignored and denied by South Vietnamese soldiers and citizens. Soldiers and civilians alike share a passive and exterior sense of idealistic hope for a liberated country, but this feeling increasingly diminishes as several broken promises between people and inward hesitations resurface as the war continues. It’s almost as if soldiers listening to the song were primed for tragic optimism, which romanticizes the perception of how exuding this unwavering sense of determined nationalism would lead to the war’s ultimate ending and peace returning to the nation. Today, sounds of tragic optimism in Vietnamese diasporic music falsely exalts empty promises of anything and everything.

Remembering history and preserving and containing those memories associated with specific historical trajectories aren’t inherently right or wrong, but they can be problematic. Allegiance to a nation isn’t necessarily wrong either nor is it completely justified because unwavering allegiance is equally problematic. And so, how do we navigate and reconcile conflicting thoughts or ideologies when this allegiance harms, excludes, disregards, and violently suppresses others? Are they firmly attached to past memories and stuck in a time that hasn’t move forward, regressing along with this stillness as justification for dubiously being resistant to change?

My father was resistant to change in some ways, he didn’t like to venture out to the unfamiliar, remaining at the same place as he relistens to sameness.

It’s an existing stagnation, this resistance to change and not being able to see beyond the familiar. Relistening and reproducing multiple renditions by the same artist or several different artists, according to Christine R. Yano and Frederick Lau, “may act as basis for innovative renderings in new hands, so that the ‘mis-’ processes identified above take on varying degrees of creative intentionality. At the same time, in new contexts, traveling musics may take on new meanings, suggesting nostalgized sounds of home, and thus become emblematized and codified.” A re-mixing and re-interrogation of diasporic songs become an access point, or a critical frame of reference, to retracing and reabsorbing the re-memories that have been forcefully misplaced due to exilic displacements. Hearing them in the present as a Vietnamese American, amplified by a modern aural repositioning, Vietnamese diasporic songs to me evoke an internal, sometimes external, tangential lamentation that is intrinsic to the memories embodied and contained, perhaps rooted in nostalgic stagnancy, within the diasporic community. And at the same time, singers still re-singing about their undying nationalism present the saccharine elongation and stagnancy they’ve recreated in Vietnamese music.

Through its re-recording production cycles, those very songs have pressed pause on themselves to show one singular view that refugees only want to remember. Likewise, I’m using stagnancy to describe how the Vietnamese music industry in the United States, the diasporic community specifically, rendering refugees to grasp onto that nostalgia to limit the intense obscuring of their memories that are closely connected to their histories. Vietnamese diasporic music is fraught with elegiac sounds as sources that are replayed to remind. Interested in the relationship between holiday records and a temporally centered nostalgia, Richard Elliott immediately opens his article, “Time and Distance Are No Object,” with the line: “The history of nostalgia has seen the concept develop from a longing for home towards a more general longing for the past.” While nostalgia is rooted on the inability to let go of the past, I would argue that several singers and composers of the pre-1975 era are unable to let go of the glorification and saccharine romanticization of South Việt Nam. Observing a congruent pattern in World War II music, Sheila Whiteley also starts her article, “‘When You Wish Upon a Star’” with how “‘homesickness’ as the root meaning of nostalgia, it is not too surprising that songs from World War II relate to wish-fulfillment fantasies.” The consistent rhapsodic tones of homesickness are distinct in Vietnamese diasporic songs as well. Diaspora is the dispersion of people away from their homeland; this im/migratory nature of homesickness follows and becomes a chiming leitmotif.

It’s without a doubt that nostalgia is the core of Vietnamese diasporic music, a deliberate reproduction of singular memories, which hinders any potential progress in revolutionizing any form of modern sounds that could redefine Vietnamese music in the present and future. Lingering nostalgia is imprinted in the bones, marking their unfading memories. This nostalgic stagnancy has halted the music industry and moving forward—which is different from moving on – feels frozen as the historical marker of pre-1975 is too omnipresent to ebb away or forget it all. Reproductions are meant to remain archived in a temporal and spatial space for preservation to withstand transience.

My mother never stopped relistening to pre-1975 and post-1975 Vietnamese diasporic songs, perhaps realizing that while her body still moves in displacement, her mind has stilled itself to remember, both her former homeland and this internal ardent longing to return to a distant past. She continues to listen to remember. Relistening to nostalgia provides that sense of tragic optimism.

Will pressing pause, even for a minute, hinder stagnancy because we’re still returning to those nostalgic sounds? Or will pausing and ignoring the rewind/back button those very sounds and lyrics propel us forward into a different diasporic liminality, whatever and wherever that may be? Re-wheeling seems like a return but can it move beyond the past tracks and play another connecting side that doesn’t forget but forges ahead, even if it’s just for a minute? 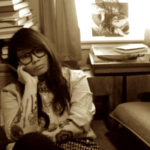 Kathy Nguyen is a writer and doctoral candidate in Multicultural Women’s and Gender Studies at Texas Woman’s University. She is planning to work on examining women in wuxia and action films and how those narratives intersect with the violence against, systemic historical erasures, sexism, and violence of Asian women. Currently, she is a short fiction section co-editor at CRAFT Literary and a lecturer in the Department of Women’s, Gender and Sexuality Studies and the Asian American and Pacific Islander Studies Program at Brandeis University.