As we bid farewell to the year of the Horse and welcome the new lunar year of the Goat, Diacritic Lien Truong asked four influential contemporary art spaces in Vietnam to reflect on this previous year and pick an exhibition or event in their programming that had significant impact on their mission and creative cultural climate. The series of posts will highlight events from Manzi Art Space and Nha San Collective in Hanoi, and Galerie Quynh and San Art in Ho Chi Minh City.

Founded in 2012, Manzi is a locally driven independent and interdisciplinary art space, which supports several forms of art and creativity, and challenges traditional perceptions and boundaries of art.  Manzi is a hybrid creature: exhibition space, art shop, café and watering hole. This model is well considered. The gallery is a space dedicated to the participation and hybridity of creative forms, fine art, poetry readings, performance, music and video screenings. Manzi can transform from a café to a cinema, and a cinema to a lecture or discussion-space, morphing into the form or stage its creative community calls for in the moment.

This philosophy serves their mission to support local artists and intellectuals, established artists and emerging young creatives. Manzi supports the latter by offering critical workshops to aid in the creative process, from inception to the final presentation of work. 2014 exhibitions included Nguyễn Trần Nam, Hà Mạnh Thắng , and the young sculptors group.

Crucial to their philosophy in providing a venue that can serve as a meeting ground for artists, intellectuals, and general public is the café and bar. The walls showcase the experimental modes of art from the artists Manzi serves.  The art shop totes art and design from a wide variety of local talent. 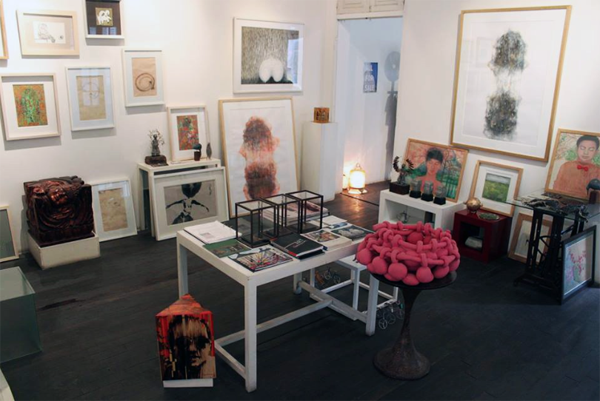 The café, bar and art shop generates income and contributes to becoming self-sustainable. This model also creates a less exclusive atmosphere, finding a place for makers, creatives and the general public to interact and participate in dialogue and art appreciation. Artists of all sorts gain important variations of visibility in all the spaces at Manzi. 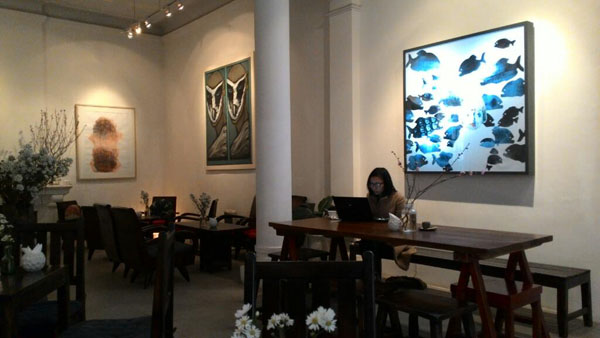 These aspects of Manzi has created a vibrant and unique atmosphere, leading to press in online sites and notable publications such as New York Times, The Wall Street Journal, The Yale Globalist, The Diplomat, Art Radar, Culture Trip, DestinAsia, Đẹp magazine, Elle Việt Nam and The Word. While these sites give deserved accolades to Manzi for their creative presence, and hopefully drum up new clientele to give their vision lasting support, in Manzi’s mission lays a serious and substantial role intending to serve its cultural community.

The last two categories of these talks examine Vietnam’s past & present history and social/political issues. The events often attract a wide range of audience, both within and beyond the usual communities of artists and intellectuals. 2014 found Manzi collaborating with researcher Tran Quang Duc (historian/author of ‘Ngan nam ao mu’) for the History Talks, on the topics of: Facts and Fictions of Viet History, and Disruptions in Viet Culture. 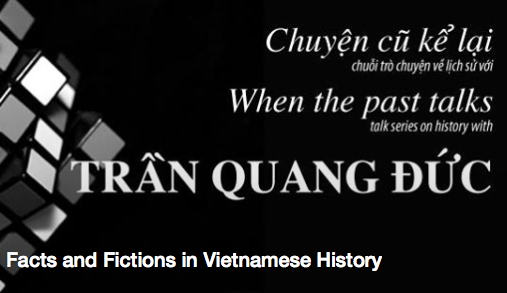 Category four manifested itself as a series entitled: “Right or Wrong?” In collaboration with Giang Dang, who co-founded and co-ran talawas, an online alternative magazine focusing on art and socio-cultural themes of Vietnam under transition. During its 10 years of existence, talawas has contributed significantly to bridge the divide between North and South, between the diaspora and inland Vietnamese and was a forerunner of citizen journalism in Vietnam. In parallel, he runs a non-governmental think tank doing research and advocacy on good governance and civil society. “Right or Wrong?” covered such charged topics as:

-Is Vietnam Ready for Same-Sex Marriage? 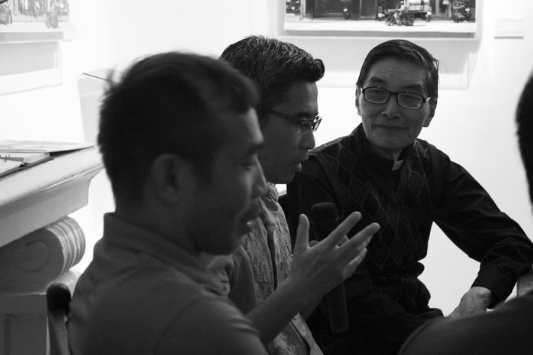 These topics are suitable contemporary international debate, and are very appropriate to the current Vietnamese landscape. While the topic of same-sex marriage might surprise some readers, the Vietnamese government’s official views on the LGBT community have been mixed of late.  Back in 2002, there were media references to homosexuality as a social evil. Following the Gay Pride parade in Hanoi in 2012, the country’s justice ministry proposed amending Vietnam’s marriage laws to include same sex couples. Artist Maika Elan’s photographs of same-sex couples in Cambodia and Vietnam show tender, intimate moments between the couples in their homes. Hotboy noi loan (Lost in Paradise) a film released in 2011, was written and directed by Ngoc Dang Vu and portrays a touching gay love story and the perils of prostitution. Nha San Collective, an independent art space in Hanoi, hosted an exhibition in December 2013 of artists who presents queer points of view. My Best Gay Friends, a YouTube sitcom created by Vietnamese filmmaker Huynh Nguyen Dang Khoa, became an Internet sensation, with the first episode receiving almost two million views.

As one can imagine, hosting such sensitive talks put Manzi on the radar of the cultural authorities. Threatened suspension of a business license, and a series of interrogations forced Manzi into “hibernation” for 3 months. It had started to become a forum, a physical meeting place that attracted “too many people”, and perhaps the wrong types, such as political dissidents.

Manzi endures. It continues to be an active creative hub; and the monthly talks slowly resume. It is a force comprised of tenacious and visionary individuals. In 2005, I sat on an artist panel at the Huntington Beach Art Center for the exhibition Out of Context, showcasing Vietnamese and Vietnamese-American artists. An American press representative asked the Vietnamese artists (somewhat boldly) what it was like to make art under censorship? After a pause, one of the Vietnamese artists quietly stated, “Sometimes when you cannot always directly say what you want, it forces you to be more creative, and that makes for better art.” I would argue that this philosophy applied here, shows the determination and innovative problem solving by Manzi’s founders on many levels.

Best of luck to you Manzi, in your future endeavors.

Lien Truong is a Vietnamese-American creative and exhibits her artwork in transcultural locations. She is currently Assistant Professor of Art at the University of North Carolina at Chapel Hill.

Please take the time to rate this post (above) and share it (below). Ratings for top posts are listed on the sidebar. Sharing (on email, Facebook, etc.) helps spread the word about diaCRITICS. And join the conversation and leave a comment! For many, Manzi is more than just an art space, but an an active hub for different kinds of creative expression. What do art spaces mean to you?

The Vietnamese Diaspora in Hebrew: A Conversation with Vaan Nguyen

“Metaphor is a shelter”: A Conversation with Truong Tran